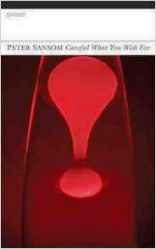 Peter Sansom is one of the best-known and most influential poet/editors in the UK. Careful What You Wish For, his fifth full collection, gained the poet a much-deserved Cholmondley Award from the Society of Authors. The collection is divided into three sections: moving from past to present, there is nothing linear in Sansom’s treatment of time, place and memory. Through sleight of language, line and image (seemingly with a light touch, but with what I call, precise complexity) in shifts between past and present and back again, the poet enacts the workings of memory; an effect both vertiginous and captivating.

I walk on in myself to walk / back to where I stood, lines from the long opening poem, ‘Diary of a Night in Matlock Bath’, give the reader a clue to Peter Sansom’s overarching technique. The poems are ‘walkings in’ on the poet’s self; ‘walkings in’ in order to walk outward again (literally and metaphorically) in the present, back to the past and towards the future. Readers of Sansom’s previous collections will not be surprised at this, and at fluent leaps of line and language. Wordsworth and Coleridge come to mind. Both poets get a mention, 1771 – black in the white lintel – … / Odd that Wordsworth was one year old that year / and Coleridge was minus one. The past is as intrusive for the poet as the gander who … stands / like sitting, snaking his neck and meeting / my eye. A key signifier here is the river as time, whose timelessness links the poet with then and now:

For Wordsworth, rowing a stolen boat became one of those ‘spots of time’ that continued to reverberate and recharge his imagination. An act of rowing for Sansom is also a charged (‘impossible’) one. The standard advice for poets to excise adjectives does not apply to Sansom who manages them expertly: the present, both heavy and green, suggests, all at once, sadness, youth, loss of youth, as well as the colour and texture of the river. This is an example of poem as topography: Sansom maps Matlock and its surroundings, leads us through it: Orchard Road, across to Riber Castle, holiday castles and The Towers, the Round House, as the day turns to evening, the book, here (as in so many poems in the collection) almost a living presence, another hour / with Mr Polly under a lamp. The poem recalls moments in time placed outside time; and is also evidence of the growth of the poet’s mind, in lines that are intriguingly structured. These fall (roughly) into five stresses in the middle and later sections although earlier in the poem, rows of single syllables are used to emphatic effect, as in the description of a dalmation, with its head in a vet cone like a song. This poem, like its companion at the end of the collection – of similar length and style but without the section breaks – is freighted with dark moments that halt the forward momentum, I walked into the woods / one sunny day burdened down (not like me) / and every day harder to manage. Nature restores, temporarily. The final poem, ‘Sofa’ sees the poet at some distance from his working-class roots; and shows how time-slips are evidenced in the language we come to use, Dear sofa, when did you stop being a settee? The poem reprises details from elsewhere, Saint-Exupéry, Robert Lowell; the poet travels by sitting still, thinks back to student days, … here I am on the same sofa / an hour by hired van and three decades / no further on. It’s a kind of magic the way Peter Sansom includes so many referents of time and place … Five Pints powdered milk, Angel Delight … Patchouli cheesecloth … Trivial Pursuits, … The Whole of the Moon, …, The Burning Perch, without ever being predictable or repetitious. He is never merely listing: all is rooted in believable autobiography, even when it is probably make-believe, as in ‘Claim To Fame’, where the poet plays tennis with Ken Dodd.

Dark moments arrive with aging and illness; incidents, for the poet and members of his family: a near drowning; memories of … the cord / around the baby’s neck; of fainting on a plane, I came to … over the Alps, cradling / a bottle of oxygen. I see a link between the plane and the blacking-out with three poems which began as translations of passages from Antoine Saint Exupéry’s Vol de Nuit. The poems focus on St Exupéry, who, in the early days of flight, went missing on a flight across South America. By making these translations into poems Sansom has translated parts of his own life story in terms another writer’s. The description of the pilot, having delivered the mail,

parallels the moment of existential crisis in ‘Diary of Matlock Bath’ when the poet walks into the woods and stares at the sky, locked into a blank dream. I also find a connection between ‘Night Flight (II)’, when the pilot … took another drink / from the night and knew the medicine / was working and ‘Diary’, where the poet, after giving himself up to nature and to consequence, is able to continue with his walk. Embracing a sense of being lost is what fuels the continued flight. The third poem, ‘Saint-Ex’, the French say, as if you were a friend, addressing the writer/pilot directly, reports on his on previous (fateful) flights, There was a crash on its way / there was always a crash. The repeated ‘yous’ bring familiarity, insistence. The poem’s ending hints at the collection’s buried narrative: … who knows / if you looked back, and who you really were. / And when you died, if you died, nobody found you.

Peter Sansom asks questions, although not in so many words: “Who am I? Who was I? Who are/were any of us?’ The poems reveal a poet defined by his past in the present: by love, loss and fear; family, relationships, places visited and lived in, acts of moving from place to place, literally, and by remembering, locating those markers in time. Music and books are to the fore. The Zombie’s ‘She’s Not There’ (lines from which are the collection’s epigraph) is a backdrop to ‘My Town’, a town which may, or may not, exist, Don’t bother trying to find it, it’s not there; at the Reading festival in 1975, I put a record on of being young … Yes and The Magic Band and Soft Machine (‘Nocturne/Reading Festival’); The Waterboys’ ‘The Whole of the Moon’ gets a mention in‘Sofa’. It is books (and writers) though, that are main maps, waymarkers and guides for the poet: Finnegans Wake, read … a page at a time for five years (‘You Have Been Gone a Fortnight and the House’); and a host of friends (‘On Ian McMillan Avenue’); W.S. Graham, Monday I found a donkey-jacket … / Tuesday there was an atlas (‘Beachcombing My Room’); Virginia Woolf, Mrs Dalloway is one way / But really I’d never throw a party like hers. (‘Party’). On seeing a girl in a street, I lived through her by the window of 821 / with Milton and Robert Frost (‘My Town’). On his bookshelves, he notes poets beginning with ‘C’, I love to crows-nest / without vantage in Clare or Clarke or Coleridge, / Cook or Corbett … then there’s Cowper. (‘Sofa’). In ‘Found Stolen’, a poem threaded through with mentions of Robert Lowell, the poet contrasts his own life with Lowell’s, …it wasn’t me who planned to live in a dozen European cities and notes as something to envy, …All that / focus and belief, the flipside being, for Lowell, another breakdown. This is never literary name-dropping for the sake of it: the books and writers mentioned are integral to the life, the poems, and to their intersections.

This review could easily be twice as long, drawing on other poems, each its own magic box, opening out, up, across, away. The reader is led in and out; finds his or her way, from light, into darkness, and out again, by recurring spatial and temporal markers. ‘Lava Lamp’ stands out from the rest as being more experimental in form: its fractured syntax and staggered arrangement enact the swirling oils of a type of lamp so redolent of the ‘70s

It is a fitting model for the workings of memory. On the back of the book is a reference to Sansom’s ‘generous saudade, ‘saudade’ being an intense longing for something absent. It is a word which suits the emotional tenor of the poems which are too sharply observant and felt to be just ‘nostalgic’: A watchword, / careful what you wish for (‘Sofa’) is a cliché too, but clichés exist as a means by which a very good poet can be un-clichéd. The title is a warning– beware of trap-doors that are likely to open, so you plummet, unexpectedly, when you thought you were on safe ground.