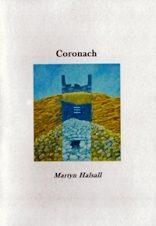 Pamphlets from Wayleave Press have a consistently appealing house style: matt card, soft colours and a centred painting relating to, though not directly illustrating, the poems. Coronach’s cover is a pale blue-grey: mist-coloured. The painting shows a sliver of bare moorland, and a heap of stones, shaping an entrance, perhaps a burial chamber. It prepares us for Martyn Halsall’s fifteen poems but does not define them.

An unfamiliar word as the title: that can be a tricksy, clever-clever start, but not here. The opening poem tells us what a coronach is, and in five lines introduces us to what, and how, the pamphlet will develop.

This is a lament, but for the land, underpinned by the internal rhymes of land/clanned/sand, and mounds/grounds, which hold the poem together, unobtrusively. Putting the definition into this poem is more effective than using footnotes: ‘funeral’, ‘song, ‘land’ – the collection will return to these themes, circling around them in different ways, developing them. ‘Every wind is keening.’ sets the soundscape, letting the idea of the sharp/keen edge of the wind overlay the human note of lament. The alliteration with ‘l’ is a unifier; the soft ’s’ (soft/sand/surf/soothes) suggests the continuing movement of the sea. Already we have absorbed the Scottish island setting – not specified here, although some poems are set on Skye.

These opening lines reveal the poet’s style: an attention to known land and how it can be best shown to the ear and eye of a reader. It’s a good base for a pamphlet that is an easy length to read at a single sitting. History slips in, softly. ‘Clearances’ opens

The caesura in line1, the two short sentences, shows the social fractures that have occurred. These houses (and the lives of their inhabitants) have been overturned – they are now ‘Just shapes in stone, laid out like longships, coffins’ – with the choice of simile taking them back into earlier centuries. It’s an on-going lament. Halsall is careful with language, letting apparently simple vocabulary work to great effect between the poems, building up real mapped places and the sound map that each holds. Curlews are a constant, with their ‘… same note, same note’s anthem of lament.’, that repeated phrase echoing their call. In a land of stone and wind-bent grass Halsall has an eye for rare colour and movement. Outside a croft ‘a flap of washing can-cans down a line’ backed by ‘… slant fields churned with buttercups’ (‘Roads to Marishader’).

Archaeology is another route into the land’s totality; barrows, a dolmen, the skeleton of a mother and her ‘stilled child’, the child laid to rest on a swan’s wing, take us into the presence of ‘…mourners gathered// four thousand years ago.’ (‘The Barrow Master’). It quietly reminds us how much we do not know: no individuals, no dates beyond a rough guess. For our own area, however, we can be more specific: count and identify butterflies (‘Small Blue’), and record in various ways how a place can be recorded. ‘The Grass Parliament’ changes the viewpoint to an artist’s eyes, a woman who watches the group of naturalists and responds to their engagement with the land and each other

The reader sees with her eyes, looking not at the past but the present and the man ‘who explained the age of the world from a scrap/ of basalt.’ This moves the pamphlet on, to poems for or about individuals: all, however, under the shadow of the funeral lament presaged in the opening poem. The final poem, ‘Wax Jacket’, overlooked when a house had been cleared professionally after the owner’s death, shows how little we know, even when we think we have all the answers. The jacket hangs, ‘a malt shadow’ behind a door, ‘… leading out to evening.’ A walking jacket, a jacket for county shows, maps: these are the assumptions, until a rummage in the pockets yields

Sometimes the recent dead are no more familiar than the bones in four-thousand-year-old barrows. The rear cover acknowledges how Halsall’s poems ‘always honour the human presence in the landscape’, something shown throughout this slim but companionable collection. It is worth seeking out; our century needs such reminders.