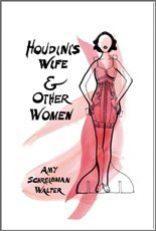 A short collection by Amy Schreibman Walter deals evocatively with women experiencing various kinds of longing: but Emma Lee wonders whether the voice is sometimes too passive

Thirteen poems that provide a snap-shot of the lives of American women, current, past or imaginary all contain a sense of longing, often for love, and a rich, internal fantasy life. “Stella by Starlight” is at a party on a roof in Manhattan musing over the irony of serving drinks in cups printed with sailing boats in a landlocked district while another guest tells her,

The specific details – the loose button, graffiti in the elevator – ground the prose poem before it drifts into anticipation – the elevator transports the not-yet-lovers to the world of sleeping lovers – but ends in the disappointment of a casual hook-up with an elegiac sun rise. This wistful note continues in “TV-Land” where the narrator imagines herself into the “I Dream of Jeannie”, a 1960s’ sit-com where a man, Tony Nelson, an astronaut, has command over a genie called Jeannie, played by Larry Hagman and Barbara Eden respectively,

The boundary between reality and dreams is further blurred through a unreliable narrator in “Asheville, 1936” where Zelda Fitzgerald wakes in a party dress, wet dance shoes and with bruised knees,

Whilst the poem captures a sense of disassociation, a person clinging to dreams because reality is too harsh, it doesn’t offer any new insights or touch on Zelda’s complicated feelings towards Scott, a man who’d shown promise but sunk into alcoholism. By 1936, Zelda’s own novel had been published to a disappointing reaction and her attempts to revive her career as a dancer had met with patchy success. The poem pointedly references “a waltz” and “Alabama” but there doesn’t seem to have been enough research to raise it above reportage.

In the title poem,

Here is another woman waiting for her husband.  Amy Schreibman Walter’s poems focus on longing, usually for love, and the blurring of dreams and reality. Her women, however, are not contemporary; they passively wait for their princes or settle for approximations of love rather than actively seeking out a man who can satisfy them. In places, particularly in “Asheville, 1936”, it also feels as if the poems have settled into comfortable rhythms and vocabulary instead of being pushed to rise beyond a professional competence.

Emma Lee‘s most recent publication is Ghosts in the Desert (IDP, 2015) and she was co-editor for Over Land Over Sea: poems for those seeking refuge (Five Leaves, 2015). She blogs at http://emmalee1.wordpress.com.