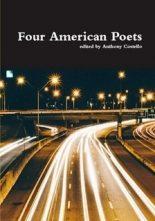 Richard Caldwell enthuses, to varying degrees, about the four American poets on show in a new anthology edited by Anthony Costello

The best of contemporary American poetry is prepared to take risks: typically we are at once thrown into a contemporary city landscape or word-scape on which the comforting presence of nature has no hold: here the only lights are neon lights. This risk-taking can earn real dividends in freshness and immediacy; on the other hand the pressure put on language to be new can issue in a curious divorce between words and meaning, such that language ceases to signify. Of the four poets presented in Anthony Costello’s new book, Michalle S. Gould may be thought to fall mid-way between the two extremes. The narrative voice of the sequence ‘We Suffer into Knowledge’ has a mordant edge to it: We are told that “We have always exactly one / less chance than we think that we / have”. Or: “it seems a very minor mercy, / the way a hand fits perfectly / to cradle a cheek”. I liked too her vision of the sea as “like a woman / Recollecting old lovers . . . Despite having forgotten / (Or never having known) / Their names”. There is a skewed sort of logic at work in what one can only think of as parables. In one of these a man drowns while the swans merely look on, since they distinguish only between what is feathered and not-feathered, and have no reason to try to save beings of the latter category. The parable concludes with the wry observation:

However, I failed to see the point of Gould’s ‘Reconstruction’ poems, of which Costello gives us a mercifully brief selection. Number 53 of the series is apparently made up of words from six works by Virginia Woolf: no doubt these words make sense in their original place; but here we have simply an unmeaning jumble. The exercise seems pointless.

Nicole Callihan’s ‘Ballad of a Lady in a City in Winter’ (which owes a certain debt to Lorca) is a tribute to the spirit of randomness. The line “If every day is the day after Bowie dies” sounds strangely prescient – or would if the following line weren’t “If every day is the day before he is born and all the stars are accounted for”. At the heart of this is the story of a failed or failing relationship. For myself I find that there are just too many “if’s” before we reach the conclusion

Callihan is at her most satisfying in this essentially autobiographical work when she is not straining for effect – as in the throwaway ending of ‘The Interview’:

With Jay Passer we know at once where we are: we are in San Francisco and it is still the Beat era, except that everyone seems to have smartphones and i-pads, and the poet no longer rattles typewriter keys but fashions poems on his PC: “I hate waiting for the computer to load”, he tells us. The world he finds himself in is one of “politicos upending morality in favour of / fat padded offshore bank accounts.” This is the “dominion of fashionista”, but he is defiantly blue at odds with this dominion as he rambles scruffily past the liquor stores and movie theatres, the pizza joints and day care centres, usually a little the worse for wear. These streets are “the streets / of desperation and fatigue”; he challenges us to “see the eyes of the people” who are “the addicts of inferno”. “I can see the future,” he tells us, “But it’s not seeing and it’s not the future / I’m good that way / Damn good.” There is much to enjoy in these poems, not least their exuberant negativity, but there is nonetheless a sense of having been there before. They would come over the fresher had we never read Ferlinghetti.

The real find here, though, is Philip Fried, a satirist in the Swiftian mode, whose icy precision of language mocks the objectivity of the “expert”: “Mass shootings will naturally trigger public alarm.” A piece on drones is delivered in the biblical language of the book of Job. In ‘Catwalk’ the language of fashion is re-invented to sinister effect:

In one poem the art of visual merchandising morphs into techniques of interrogation. In another water is seen as a “non-state actor”, flowing secretly over borders, and conspiring with bacteria and mosquitoes; and from its “covert puddles” it “takes part in uprisings.” Even the simple act of cooking a meal in the kitchen becomes a matter of menace, given that a “commercial / cooktop is convertible to a full-tracked // low-profile combat system with a high / degree of arrmor protection and lethal firepower”. It is unsurprising that American religion comes in for some knocks: here God is in Las Vegas, wearing a tuxedo: we are advised to beware of his song which is “a seduction which disavows / Itself in the singing.” Even predestination is not what it used to be: God has found it necessary to “downsize the elect”, not being able to guarantee “an eternal position”, though those facing severance are routinely wished every success in their “post-salvation existence”. This is a hard-nosed style (one is sometimes reminded of Frederick Seidel) that could only come from America. There is a certain paranoiac energy that is curiously infectious. And Fried’s ability to twist the languages of science, technology, fashion, religion – whatever comes before his sardonic gaze – for his own subversive purposes makes for a joyous inventiveness. In his sheer verve he carries all before him. Welcome to England, Mr Fried!