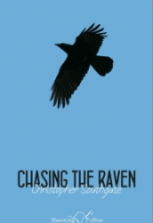 There is much to admire in Christopher Southgate’s collection Chasing The Raven. The book is divided into five parts. The first is observational and reflective with poems about the ups and downs of the author’s life while the second contains poems about historical events, like the fall of Troy and Wilfred Owen speaking in Ripon Cathedral, September 1938. Part three is a mixture of the author’s own experiences and more moments in history and the fourth section mainly contains poems of a Christian nature. The final chapter involves poems on the thoughts of the author, about certain Scottish landscapes, animals and a trip to Ground Zero in 2012. Evidently there is a real melting pot of subject matter and themes in this collection, ranging from loss, suicide, birth, the tidal emotions of love, sex and religion and this make it a most engaging read. I will select a few poems from each part to illustrate how the author uses the style and technique of his poetry to convey these themes, in a convincing and effective manner.

A keen example of the poet’s honest observational poetry in Section I is seen in part 2 of the poem “When”, entitled “Just about as good as it gets”. He is in Caffe Reggio in Greenwich village and it is autumn. The lines

convey the scene with an evocative, yet simple choice of language. The atmosphere, one of serenity, is implied by

echoes around high buildings/singing off glass and so lifting the heart. I find this  a highly poetic image in its simplicity, and its catching of the receptiveness of the senses.

The poem “Blood And Incubators” uses an event in the poet’s life to illustrate the fragility and ordinariness of our existence; the very title implies this. It is done again with simple language like Our lives are lived in waiting-rooms, consultant’s screens and contrasting it with religious references like hospital chapel/under an unseeing crucifix, and then introducing a reflective statement at the end of the poem:

Thus the context of giving blood is used here as a vehicle to express precarious mortality and show that, whoever we are, a pauper or a millionaire, we are still all at the mercy of our humanity.

What I liked about this section was the fact that the author, in a plain yet erudite way, illuminates the human condition with a thoughtful insight, while the simplistic language and the basic and honest observations, make it all the more persuasive.

In Section II the poet places himself in historical situations, like the fall of Troy and the attempted assassination of Hitler by Stauffenberg; however, I felt that in these poems the author rather loses his voice which was so relevant and apparent in Section I. The poems that work best in this collection stem largely from the author’s own experience, rather than placing his voice in a historical context. Yet poems like part 1 of “Three Re-Tellings” (called “Death at Troy”) do bring events alive because of the author’s descriptive talent. The language is emotive: No kings came to weep over the body. And the description of Odysseus being as quiet as John Major, injects some humour into the poem. “Three Counterfactuals” part 1 “Stauffenberg” imagines the build up to his attempted murder of Hitler. His wife Nina tells him on the phone that where he has hidden her is so quiet that she can hear the children breathing/as they sleep. The choice of language succeeds in evoking the tense build- up, At the Wolf’s Lair the bomb goes off and kills everyone. Then Stauffenberg assumes command in Berlin and the scenario plays out (his wife is shot by an SS zealot) and the author turns history on its head.

As already mentioned I found Section II disappointing after the poetic strength and freshness of Section I, mainly due to the poems, while well written, not quite fitting the overall tone of the collection and lacking the clear voice so apparent elsewhere.

Section III begins with the poem “The Application” which seems to be a humorous account of a student The Blue Rose applying for a course. This is a light hearted poem which I enjoyed; but the two poems from this section which particularly caught my eye were “Getting To R” and “The Postcard” which are contrasting in their subject matter and style. The first is overtly intellectual and the second is a personal account of the poet’s apparent adoration for a postcard of a “Modigilani:Female Nude, 1916”.

“Getting To R” begins with a quote from a Virginia Woolf novel To The Lighthouse. The poet uses the quote to elaborate the first stanza and refers to it constantly, On balance, I am inclined to regard Q/As overrated are the opening lines. Then the author goes on I have sniffed at F, hinted at G. This makes little sense to readers (like myself) without knowledge of the novel. It is well written, but leaves one confused at the content and subject matter.

In contrast “The Postcard” is more obvious with regard to subject, and it narrates the story of the poet’s particular attraction to a female nude on a postcard in his possession. Her description is vivid, her complexion looks Spanish/With perhaps a hint of Morocco. Yet the poet’s adoration is tinged with some sadness as She is long dead, but she has been immortalised on this postcard. It seems though She is not interested in his attentions, yet the poet is convinced that a moment/Of her life, and fragments of mine,/Lie truly together – a poignant afterthought, which is typical this collection’s honesty and emotional integrity.

Section IV deals with a subject close to my heart, Christianity. The first poem, “The Lot Fell On Matthias” is about the disciples choosing a successor to Judas Iscariot. The candidate seems overtly nervous about this, which is made evident in the opening lines, I was not at all sure I wanted it./Judas’ seat that is. Slight trepidation is also felt by the other disciples, but they continue with their formalities, as they Sang the psalms together and then broke bread. Christ enters the picture when the candidate talks about his grief at his passing, I missed most his voice. Furthermore, his apparent anxiety at meeting and following Christ is vividly visualised in the rest of the poem. So here the author shares with the reader an historical event and his voice, in my opinion, is far more genuine in this poem than in his other historical pieces, as one can almost sense the poet’s own anxiety at becoming a Christian, through the experience of the main character. Other similar poems in this section include “Saul At The Stoning Of Stephen” and “Pentimento” about the arrest of Jesus in Gethsemane. I found them fascinating and any reader with spiritual interests will appreciate their value.

The last section of the collection is a diverse mixture of pieces from subjects like Ground Zero in New York, a celebration of the 50th anniversary of the interment of Eliot’s ashes, and a description of a remote region of the Scottish Highlands. The poem I am going to look at from this section is “Assyny Fragments” which is a portrayal of a barren landscape in Scotland. The scene is set in the first line a fierce wind from the west which suggests remoteness. In the next line the metaphor, Flickering an eagle’s furled feathers is effective as the eagle grips its perch, motionless. The outline of the vista before him continues in the next stanza a tall cone of rock/hiding the line of climbable ridge. And I love the image the opaque sheet of rain. The tranquillity of the landscape is evoked by a deep quietness/tracing the shape of the loch shore; and for me the most important lines of this book are at the end of the poem, A raven laughs at me,/ twists away, is gone. Why are these two lines so essential to an understanding the author and his work? It is because the collection is called Chasing The Raven and here at last we discover the raven – a bird which is believed by native American Indians to be a messenger from the spirit world – a bird constantly written about by poets throughout the ages, representing both the spiritual and mystical realms, that as human beings search for, the Avalon of our minds’ content. Perhaps it conjures up a little magic in us all and, if so, the author is no exception. He too is searching; and perhaps this collection gives an extremely intimate and adventurous account of some moments in his journey, which it has been a pleasure to read.