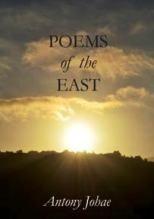 Antony Johae has a convincing pedigree as a literary figure well acquainted with the Middle East, having spent eighteen years in Kuwait teaching literature at the state university, and now living part of the year in Lebanon. His poems derive as much from his experience in these countries and from his travels as from his poetic sensibilities. He writes from the heart and from the life; in this nicely produced collection he paints narrative pictures of people and places in the Middle East and the Far East.

In the process whereby Johae’s prose becomes poetry and his poetry becomes prose, there is a compelling meeting in the middle. His poetry portrays the quotidian scene with a subtle and exotic glamour, while the reality of events is not lost – except, self-evidently, when he enters the traditional world of folklore in poems such as ‘Variation on the Tao Years’. He has an acute sense of detail, as in ‘Anecdotes of a Driver’:

This is not conventional poetry, but it is highly descrip-tive. The stories told are mainly of the present day, and Johae does not shy from the harshness of punishment: ‘Throwing Stones’ is an indictment but also a poem of redemption. He confronts physical muck – ‘Kumbh Filth’:

– as well as physical beauty. ‘Tagore at Sixty-Two’:

The writer also delves into the literary past – ‘Lawrence at Wadi Rum’ tells of an incident described in T E Lawrence’s Seven Pillars of Wisdom:

At times Johae seems to have his own lexicon. He incorporates a sprinkling of Arabic and Chinese terms, which are footnoted; these lend an exotic touch. Orthodox poetic forms are few; a single pantoum is successfully crafted. The inclusion of a couple of limericks is, however, a miscalculation. Johae gives little room to poetic artifice; the occasional alliteration occurs, and when it does it seems almost casual – ‘At Shiraz’:

He exhibits an individual trope in dropping, every so often, the definite or indefinite article, a form of elision which adds to the pervading sense of exoticism. He finds room for quiet humour – ‘Resting Place’ is a description of a pets’ cemetery in India: Cockroaches? No sir, our grounds for burial are philanthropic and, of course, hygienic. Perhaps the most pleasing poem is ‘Arrival at Rafik Hariri International Airport’ which was published in The North some three years ago. The final line simply makes one smile with recognition – to quote it here would spoil the fun. Some twenty-eight of the poems in this collection have indeed been previously published, and one, ‘Mosque in Kabul: Epilogue’, has lent its final line to the title of a Jardine Press 2014 anthology of poems on the theme of conflict, so too have the doves gone.

Poems of the East has already received several public readings, and this is when the poems have really come alive.