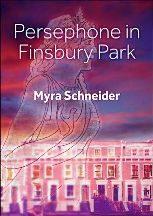 A new collection from Myra Schneider is usually a delight: a chance for a reviewer to relax and enjoy acutely-observed, crafted poems which create uncluttered images of their subjects, building up textures that ask the reader to look again. Persephone in Finsbury Park does not disappoint. The book is split into three parts, one of general observations, the second focussing on people who have been overlooked or whose reputation isn’t what it seems and the third section being the sequence which gives the collection its title. The first section, “Sunday Morning in the Park” starts with a voice calling “Lily!” which conjures up images of star-gazing, tiger lily flowers and Pre-Raphaelite women, not a character with a

That “its” in the third line of the quotation is telling. The observer is struggling to see this plain, muddy-brown dog as an epitome of feminine qualities suggested by her name. She’s clearly not an advert for the event the owner is involved with. The poem goes on to wonder at the choice of the word “capers”. Another misappropriated word is taken to task in “Pure” where it’s used to sell a lifestyle of “pure indulgence”. The word lingers,

Its inappropriate use leaves the poet tense and unable to relax when seeing natural images which should induce calm but instead cause her to focus on the litter left in the brook.

From the second section, “The Real Mrs Beeton” turns out to be

Today, she’d be a heavily-sponsored YouTube star, living in fear of her inauthenticity leaking out, but still as fake and as unknown as her Victorian version. This poem also raises the important point about how little we know of women’s lives and how, for many, access to an audience was dependent on permission and cooperation from a husband who might censor or exploit his wife’s story. She could have provided a warning about the toll taken by the building of a personal brand and allowing it to be taken over by external forces – generally marketing and preserving the brand’s integrity – at huge personal cost driven by her husband’s need to keep the income her name generated.

Her mother, figuring out that she can’t persuade Persi to leave Hamish, breezes in to try and persuade Persi that she could use her acting skills to give talks to boost her mother’s business while resting between parts. The rhythm and use of enjambment prevent the longer lines feeling like prose and keep the reader moving on. Sensuous details build up texture and layer the poem with a sure touch. In Persephone in Finsbury Park Myra Schneider demonstrates she continues to be on form and a delight to read.

.
Emma Lee‘s most recent publication is Ghosts in the Desert (IDP, 2015) and she was co-editor for Over Land Over Sea: poems for those seeking refuge (Five Leaves, 2015). She blogs at http://emmalee1.wordpress.com.