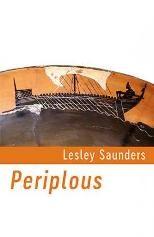 Periplous is derived from the Greek and means “a sailing around.” On their voyages the Greek navigators added various notes to the ship’s official log which if they were professional geographers (as many were) became part of their own contributions to Greek geography. The periplous was a type of log.

The poems written by Saunders are a poetic, imaginative log of the twelve voyages of Pytheas. Pytheas, from Massalia (now Marseilles), is thought to have been the first person to circumnavigate the British Isles, in 325 BCE. His own account of the voyage is lost.  The poems in this book are expertly crafted. Each follows a format of seven lines to a stanza, with five stanzas in all and the last line of the final stanza always standing on its own with a line gap separating it from the rest of the work. It is the final thought that the reader is left with and echoes the rest of the poem. This line both echoes and leads the reader on to the next poem.

I am fascinated by these poems and also curious to know how Saunders came to be so involved in the story of Pytheas. I’m very pleased that she was and tht she decided to devote a chapbook to his and then her own work. This is an excellent story-poem and the stories develop as the poems progress. I was riveted and read the book from start to finish in one go. It’s a clever technique to captivate your reader so ably and can only really be done in a chapbook of this length. Each poem needs to be carefully digested before moving on to the next one. The poems relate to different eras of sea travel. They are not all set in the time of Pytheas.

The first couple of lines of the first poem in the book, “Journey’s jargon” are:

and it ends with the line

which sounds as if the Greeks already knew the history before it happened. What are they waiting for? It makes a menacing end to the poem which moves directly into the mood of the next poem, “Armada”, which starts: Flare. A blaze of fire on the moor and ends with At what point may a man call himself happy? Which is a pertinent question for all of us.

The subjects in this collection move at a quick pace. “Catalogue of Ships” proceeds from:

before arriving at its concluding line And when, where, how or ever again?…

In “Tanguedad” (a more modern setting than the time of Pytheas) the sailors find themselves in a port city (after steering through the observations of constellations of the southern sky) and dancing on uneven floors in the arms of other men. One presumes they were dancing the tango.

The twelve voices in the poems travel over centuries and The Twelve Voyages of Pytheas represent the voyages in each one of us. The personae in the poems change from male to female, grandmother to grandson and include even a transgender voice keeping the reader alert to subtle changes in tone, dialect and content. This is a highly skilled and innovative interpretation of the Greek sailor Pythaes with subtly added meaning to relationships, voyage, travel and generally the experience of life.

Saunders is generous in providing notes with references and translations of foreign language phrases used in her references. She has found an individualised way to adapt an ancient seafaring myth into a modern work, but retaining the language of legend.
I would highly recommend this chapbook to anyone with a willing mind to be taken on a voyage of discovery.