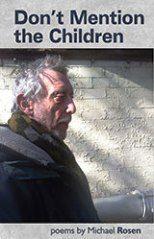 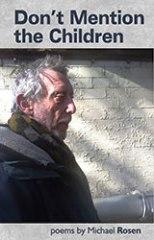 This is a collection whose poems seem very current.  Broadly they cover a persona out of kilter with the modern world, a character’s Jewish heritage and a voice railing against a government with little social conscience.

A fair proportion of the work follows a persona who finds the modern world perplexing.  Always within an urban environment, the poems recount incidents and thoughts that seem to belong less to real life but more to a liminal state of mind.  Odd encounters lead to surreal discussions with people met in shops, pubs, hospitals.  Rosen’s skill is to use dramatic monologue and vignette often in pure dialogue that gets us inside the head of such disenfranchised individuals in an effort to understand their bewilderment.  We learn they are either visionaries who find hair growing out of bread; a small watch embedded in a tooth where a crown should be;  or characters with minds broken by a careless world.  Such tales at times verge on the allegorical, as the first person narrator struggles to make sense of the modern world, changed from his childhood, where time is a means of control, curtains seek to suffocate.  The ‘I ‘becomes Kafkaesque as he strives to understand this changed world.

In one poem he challenges the new concept of ‘smart ‘products that purport to make our lives easier; and in another ‘Cucumber’ engages in a Mad Hatter conversation about the eponymous vegetable with a lost-property man. This first person narrator cuts a lonely figure, reinforcing the separateness of modern life.  Hungry for communication, he engages in conversations with random strangers – from train station officials to doctors.  He is on one level the strange person who sits next to you on the bus; but he is also someone who sees the absurdity of modern life yet is not entirely down-hearted.  Frequently such communication is cross-wired, especially where the person is literal-minded in a society ridden with jargon and slang that is in itself designed to confuse and exclude. Thus in the poem ‘Eating myself’ the casual expression used by a doctor to explain an auto-immune disease leads to a full scale discussion on the exact meaning of the term and reminds us of the lexical difficulties inherent between professional and layperson.  At the other end of the scale a simple visit to a cafe in ‘Tea’ reveals the gulf between a literal use of language and inferred meaning where ‘Homemade Tomato’ is not soup but actually a home grown tomato on a plate. Whilst these exchanges are humorous and even weird they effectively reveal how our imprecise use of language can lead to mis-communication that puzzles the dispossessed and by extension makes language a barrier rather than a means of social cohesion. The inference also seems to be that this barrier must be sharply felt by those new to the UK.

This leads to the more explicitly political poems at the heart of the collection. Many deal with a Jewish persona who strives to make sense of the holocaust. The sequence begins with touching memories of a father and mother, thereby forging a link between this family and the reader’s own familial relationships.  Son of Jewish immigrants himself, Rosen’s persona then strives to piece together a family shattered by Nazi occupation. The poet manages to write not just for the anonymous victims of the atrocity but at the same time, by referencing specific aunts and cousins with names and traits, he helps to personalise the horrors. In ‘Not just for them’ the persona seeks to re- construct a family tree whose members were lost to the second world war. This poem combined with ‘They shall not pass’ aims not just to remind us of the effects of fascism but seeks to bear witness to the fate of specific family members. The holocaust therefore becomes not just a genocide of anonymous victims but of individuals we engage with.

Yet this section has another specific purpose. Rosen is not only reminding us of the holocaust as a historical event.  The sequence ends with an accusatory poem to the extreme right wing French politician ‘Mme Le Pen’. This along with the simple poem ‘I sometimes fear…’ reminds us that fascism does not arrive in fancy dress’ – rather it arrives as your friend. Such poems therefore must be read in the context of the current situation in Europe where the dispossessed are being demonised by right wing parties.

The poet suggests that fascism is a constant that is part human nature and part political sleight of hand; and that it is far from being an aberration consigned to history.  Rosen’s concern here lies with the use of the immigrant as bête noir to distract the people from the real problems in society.  In the poem ‘Miliband, UKIP, and the I’m not racist but… people’, the frequently-heard mantra is revealed as a psychological trope that helps the user justifies his /her beliefs that are in fact racist. This leads on to the direct poem ‘Nigel Farage reads Lessons in scapegoating on the train’. Here a 5 step lesson in racism chillingly recalls methods used by fascists to identify and isolate the ‘other’ in society. The fact that such methods are recognizable in today’s society reinforces the concept that the lessons of history are never learned.

A section of this collection is devoted to the current political landscape in the UK.  It is not simply that the voice is left wing therefore at odds with capitalism and the Conservative party;  rather these poems give vent on behalf of those who have no voice: the poor, the sick, the immigrants are all defined as the ‘other’ in modern Britain. The tone is angry but controlled, frequently addressing the reader directly.  It is the voice of a bard who sees straight through the smooth men in suits with glib lies who reassure us they have our best interests at heart but who have agenda which are not benevolent but self- seeking.  Thus we have’ Regeneration Blues’ with its appropriate use of refrain and elegy to bemoan the loss of social housing in London as councils regenerate housing stock purely to be sold off as prime real estate in boroughs that have become fashionable.

Bankers are treated severely for their part in the economic crash. Much reference is made of the small group of wealthy elite with their off-shore accounts.  Many such poems emphasise the gulf between these mega-rich who, though small in number, control the lives of the ordinary majority.  Many are polemics that attack the current Tory government.  The poem ‘Tory UK’ lists the administrations agenda that we all recognize: cuts to welfare and public spending whose effects are most felt by the poorest in society. The voice does not flinch in naming names, laying the blame squarely ‘Gottit, Dave UK’ . The concept of attacking politics and policy, echoes Shelley’s opinion that poets ‘are the unacknowledged legislators of the world’.

Perhaps the most touching poem here is ‘NHS’ that lyrically reveals how the health system covers all lives, being the first hands that touch us and then touch us last.  In between these events is a litany of the ways in which like a careful parent the NHS supports us. The tone is sad even elegiac for an NHS that is in need of care itself.

The poem ‘The megaphone explains’ examines ways in which a government uses language to brainwash its people with various repeated phrases or aphorisms such as ‘The deficit’, ‘the economy’, ‘cuts.’  This reminds us how easy it is to see these as abstract concepts rather than ideas that have an impact on real lives.  Rosen is not just very politically aware with facts and statistics to back up his arguments but he also strives to make us see the language used to manipulate us. Here the poetic form lends itself to ape political rhetoric with use of repetition and the power of three.

Education is included here.  ‘NormCheck’, ‘Exams’, ‘Guide to education’ are part allegory, part black humour. They reveal a government agenda that seems designed to make ordinary children fail and therefore be written off as fodder for the designs of the ruling classes. The tone and register is furious as the truth of a system designed to test memory consisting of a curriculum of little practical use in real life is designed to keep the majority unthinking and uncritical.

The most powerful indictment of the education system comes in ‘Examz Inc’, whose title references texting  slang but also a Disney franchise.  The dystopic narrative considers the nature of exams that are  labelled by the letters PV short for ‘projectile vomiting’.  Rosen only rarely uses metaphors so they are all the more memorable when he does.  Thus PV is symbolic of the vomiting up of information in an exam as a means to disadvantage less well-off pupils but benefit the ruling classes.  Education is reduced to learning facts, practicing exam technique and then disgorging them purely to give the examiners what they want, all such information being then forgotten by the short term memory. Such a description will surely resonate with teachers.  It is also reminiscent of Dickens’ Hard times and Mr Gradgrind’s devotion to dry hard facts. What angers the narrator is the way an education system conspires to dampen imagination and the ability to think for oneself and challenge the status quo, thereby suppressing any means of social mobility.

This is a ‘condition of England’ collection. It highlights ways in which we increasingly feel bewildered, and isolated.  It tries to make sense of a high tech, commercially driven world. The government, those in power,  the wealthy are all berated for duping ordinary people.  We are reminded of recent history and the ways in which history can repeat itself if not checked.  All ideas are conveyed in a mix of lyrical poetry, prose poems and polemics with effective use of dialogue, interior monologue in a voice that frequently addresses both those running the country but also the reader.  This is a collection that does not pull its punches.