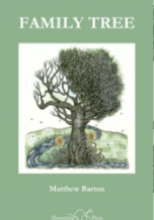 In many of the poems in this his third collection Matthew Barton displays a honed-down art that makes each word count. This is a style that’s plain but with a firm control of rhythm and a supple syntax that enables his poems to wind their sometimes intricate way to a seemingly inevitable closure. Such a poem is ‘Mother’ in which the speaker, seeing her give way to tears, records this moment when she’s broken open, after which

The poem is an intimate one, and yet by virtue of the distancing effect achieved by a diction almost clinically precise and by the use here of the second person instead of the expected first, it doesn’t fall into sentimentality. Like a number of poems in this volume it concentrates on a moment of sudden awareness that becomes a sort of revelation or epiphany – sometimes in the most unexpected, even humdrum, circumstances. A poem entitled ‘Vegetable Plot’ and which opens The pumpkin we planted . . . would normally not bode well: Do I want to know about his pumpkins? the reader might well ask. But, of course, the poem is not about horticulture but about joy: his son’s face is one globe of delight as he leads his father to a place deep in the growth / that I’d simply not seen and where, in a glorious epiphany is revealed,

In ‘Better’, another poem about his young son, the sick child falls asleep lying on top of his father’s body. I was your ship, he is told:

The diction is simple, but every word is loaded; this is poetry without frills. There is a sort of freshness and honesty about Barton’s work that comes from looking afresh at the world and describing meticulously what he sees. His concern for wildlife, for ecology, and for indigenous peoples is reflected in several of the poems, as if his preference for rural rather than urban life, but he never confuses poetry with propaganda. In ‘January Walk’ he invokes Edward Thomas striding towards / a thrush-song’s last, bright certainty. This, I thought, is too close to pastiche for comfort: surely Robert Frost would have provided him with a better model. I need not have worried: the poem immediately following, ‘Sleeper’s Block’, in fact ends with cadences that uncannily recall those of Frost: the art of giving up the self, the lift / you can’t compel except by being it. Another poet he has clearly learned from is Philip Larkin: the life of the man in ‘Outside the Care Home’, like that of ‘Mr Bleaney’ is in conditional mode: in this case he walks round and round as if going the other way // might give some sense that he / had turned his life around. Larkinesque too is the extended syntax of the question which brings ‘The Architect’ to its eloquent close:

But the distinctive voicing, the sense of paradox, the narrative craft that offers only what we need to know and not a jot more, and the determination to let no nuance escape are Barton’s alone. True, there are some misfires. In ‘Burial Chamber’ the alliterative effects are intrusive: whumped like a heart / as if wombed here I heard // the pulse of a mother sounds like Ted Hughes on auto-pilot. He is not at his best in the dramatic monologue form: when he writes en travesti as Mrs Coleridge one feels he is not fully engaged with his character. Yet, all in all, this is a highly impressive collection, often marked by a remarkable felicity of phrasing that takes one by surprise, as in a poem that begins with a child’s loss of a tooth and ends with ruminations on those frozen gestures of clinging on. Often too there is a thoughtful, somewhat rueful, tone: much harm, he tells us, I’ve done / by skirting / round myself.  But the poem nonetheless ends on a defiant note: