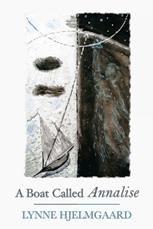 A twenty-ton boat, its journeys, the human relationship that kept it afloat: Lynne Hjelmgaard uses all this as the core for her third collection. It could equally take its title from the second poem, ‘That Feeling of Boat’, because this is what her poems give; they share the movement, smells, sounds, anxieties, space, joy of being at sea, and being responsible for your own direction, literally. Metaphors and reality combine. Hjelmgaard brings the specialist knowledge of an experienced sailor to her understanding of the varied rhythms demanded by her poetry. Reading her, I begin to appreciate what a sea-journey feels like.

‘That Feeling of Boat’ is also the title of the first of four named sections (the others are ‘On Shore’, ‘Elsewhere’, and ‘A Brief Return to the Tropics’). These seven poems establish the distinctive style and tone that hold the collection together – connection to the past, a sense of loss quietly told, free verse and an attention to the placing of each word; this is as precise as her attention to every movement and sound of the boat. Formal patterns would be constricting, out of place; in choosing free verse Hjelmgaard opens herself up to the constantly shifting interaction between Annalise and sea, weather, and the two people who work her –

In short couplets, and occasional single lines, we are taken into the unsettled state of constant watchfulness required to manage the boat safely – There is a thick/ anxious kind of jittery. It’s a shared task, and in this poem the practical work falls to her husband, who struggles with the light and adjusts the jib sheet / cranks the winch tight, and tighter. Her role is learning to adapt to boat-life – Away from civilisation / we’ll keep becoming capable. The lines pitch and toss; only on a clear and windless day (‘Seamanship’ – the next poem) does anything settle into something approaching stability, and then the luxury of calm –

Information about this journey emerges gradually as we piece together the details. Annalise is crossing the Atlantic, headed for the Caribbean, through high seas and the nausea of sea-sickness – This is a washing machine./ I am turned inside out (from ‘Novice’). A rogue sea, in ‘Night watch’ (written in three-line, short-lined, stanzas) points to the ever-present danger – We are tightrope dancers – / no net below.  Life on shore, the island, is all the richer for this contrast; it’s somewhere our darker selves can shed the tension.

She is alive to the contrasts between sea life and the shore, and how they are all changed. Annalise retains her own smell –… slightly honeyed / rusty cans, soapy rags, brewed coffee, / whole cinnamon in a drawer. Island life, however, is not entirely an idyll. There is an undertow of menace and there are contrasts here, too: between the demands of tourists and the working lives of islanders, between the brightness of the waterfront and decay in the back streets. Stability is only for a moment; the norm is fragility and the technical demands of the boat – the engine, pump, rotting wood. ‘Leaving Port’ opens and closes with the same couplet – We need the music of wind and water,/ the horizon our home. It’s the only certainty, as delicate as the two short lines.

On the back cover of The Ring, Hjelmgaard’s previous collection (from Shearsman, in 2011) Dannie Abse writes of the ‘the synergy of related poems’, and that is certainly evident in the first half of this collection. Perhaps it is inevitable that the poems in ‘Elsewhere’ (the third section) will be less coherent than the earlier narrative, and less satisfying to the reader. While some of the personal tensions found in a relationship at close quarters are explored – the clash between her husband’s city life (…his mathematical energy; hard-driving/ industry, telecom, facts.) and her less defined, more flowing, indefinite – the statement Two people together for so long can be rekindled at sea (the first line of the poem ‘A Boat Called Annalise’) falls short of showing what has already been been established in the preceding poems. There is a sense here that Hjelmgaard is using some of these poems to explain herself to herself: the stanza shape becomes looser, the language less visual. Locations change from poem to poem – New York, Copenhagen, France and its rail network, London. Her husband had died in 2006 and the dislocations of loss suffuse this section. Only in the four poems of the final section (‘A Brief Return to the Tropics’) does she fully pick up the complexity of the relationship between two people and their boat, now contrasted with the loneliness of loss. ‘Connections’, opens with a description of a large yacht being rubbed down, reviving her memory –

– before a night on a friend’s yacht, despite the thrill inherent in its sense of distance travelled, leaves her disconnected. It recalls her use of the same word in ‘Seamanship’, when being disconnected meant being together, and happy. The final poem, ‘Postscript: Because of the Beauty of the Ship Herself’ sums up what is best in the collection: the huge part that Annalise played in their lives, the overarching narrative of sea,travel and love.

Again, lives and the boat come together, but now Annalise takes on more grandeur: she becomes a ship, something that had sealed their lives together. In the poem’s final lines –

– and here, again, is the fusion of metaphor and the real, so striking in the opening poems. Perhaps the restless rhythms of the land-based poems in the ‘Elsewhere’ section are a necessary prelude to this affirming elegy.

The riches in this collection make it worth seeking out, even if you know nothing of boats. Its rhythms – within and between the poems – will take you into understanding all natural sounds that are the music of sailing.