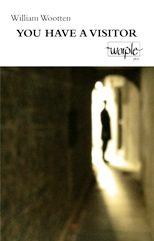 This is a timely collection, a reminder that poetry is far wider than the current vogue for urban themes, driven by youth and performance, and that there are many ways in which poetry can reflect and engage with the twenty-first century. In You Have a Visitor, Wootten’s poems find a point of balance between traditional celebrations of the natural world and the particularity of contemporary living with its laptops, televisions and roadies. This collection takes familiar poetic forms and reworks them for this century’s readers; it allows the seasonal calendar give an overall shape to the arrangement of poems but without straining this conceit. Within the fifty-two poems there is more variety than might appear at first, and more connecting links within the poems themselves.

Above all, these poems celebrate a deep love of unspoiled English countryside, somewhere that has not yet disappeared entirely. Wootten lets this theme settle around forms that recall the half-remembered poems read in childhood, poems that shaped our own early response to rhythm and rhyme, but in a subtly different way. The opening stanza of ‘Elysium’ with its long-vowelled rhymes and repetitions –

– is a reassuring reminder of continuity, even as subsequent stanzas bring the first suggestions of change. For a moment ‘time’ is not moving on but here and perfect. In ‘Dandelion Clocks’, a poem of six-line stanzas, each of three rhyming couplets, the seemingly child-like patterns balance the immediate presence of time in the form of fragile seed heads with the questions arising from adult uncertainty. Trees are a mainstay, starting with ‘Becoming Trees’ in which a student meal of … Italian sausage, cheddar smoked with applewood/ And bread metamorphoses lightly into Ovid’s tale of Baucis and Philemon. ‘Wood from the Trees’ opens with the question Why did you come here? where the internal rhyming – avenue/you, dust/trust, lumber/timber – implies a connection to the house while the surface of the poem shows something more troubling even sinister. ‘The Apple Tree House’, which follows immediately, may have been written for a child, with its simple four-line refrain and image of a tree-house and ‘red apples’; it also works for adult readers by giving some reassurance of stability. This leads naturally on to ‘King of the Pippins’, a play with varieties of apple, using their names to create a fantastic fable –

That’s twelve varieties in just one stanza. There is also a quality of romance to the rural tales, something just out of reach; this intangibility, along with the dreamy vegetation and remoteness, reminds me of the lost domain in Le Grand Meaulnes. The publisher’s description of the collection calls it, appropriately, ‘a book of songs and stories’.

Literary reference is worn lightly, and Wootten chooses not to weight his poems down with notes: there is no need for them. In ‘In the Detail’, the first of two poems around Marlowe’s Doctor Faustus, an un-named Mephistophilis employs the vocabulary of a modern financial adviser; the reader is left to make the comparison. In ‘The Harvest’ – One of those rare and yellowed days one gets/ In Wittenberg – we have a glimpse of Faustus in old age before the scene shifts to street-life, as seen by a magpie. The longest poem in the collection, this is a poem poised in the observation of a world in waiting, and Faustus is only a part of a much larger scene of harvesters and hunters. For those familiar with the tale, the tension in the poem comes from the knowledge we bring to it; for those unfamiliar with the Faust legend the poem is a lyrical evocation of autumn, tinged with the hints of trouble trailed by the magpie.

There’s a ballad, ‘Miss Ginny Lee’, told by the man who succumbed to her temptations which, as is the way of ballads, are left to the reader’s imagination. A triolet, ‘Oranges’ –

lets the half-rhyme of orange play to ‘near-images’ and ‘marriages’ so that a poem about the sensuous pleasures of Seville is also a poem about words.

The title poem is in five six-line stanzas with a tight abccba rhyme scheme that never feels constraining; indeed, the quiet, seeming-hesitant narrative is the opposite of tight. It feels tentative, although there is an underlying insistence in this unspecified visitor and his presence. Death, of course, but not in a menacing way: he is an inevitable arrival.

The visitor comes with repeated ‘and’s; he won’t be shut out by the end of the opening stanza but persists; there have been ‘other times’; he has been hanging round at the hospital, ‘that day.’ ‘He’ is there in the everyday language, the sheer ordinariness of the ‘last bus’. In the collection’s underlying seasonal sequence this poem is placed just after the end of summer, when … Grass dries/ In the promise of July’s/ Rich days, so it may enter/ High barns for winter. The ways in which Wootten leads the reader from one poem to the next are satisfying and never forced.

Hugo Williams describes Wootten as ‘modernist, yet traditional’ and this combination, unexpectedly, holds the collection together. I wonder how many poets would have the courage, or the originality, to use for their concluding poem a version of lines from Chaucer’s The Franklin’s Tale? Perhaps we pay insufficient attention to a deeper knowledge of our individual poetic roots and so I will end where I began: this is a timely collection.