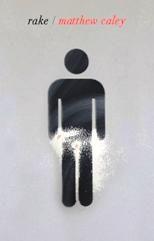 Rake is advertised as Caley’s fifth book, any early pamphlets subsumed into his spinal works. Its cover, for a Bloodaxe title, is relatively restrained, featuring a photograph by Kieron Baroutchi, of the sort of ambiguous figure used on signage, its genitalia obscured, on a grey background. Caley’s title could refer to the sort of gentleman adventurer epitomised by Lord Byron, Peter O’Toole, or the characters in the movie Dangerous Liaisons. This version of Choderlos de Laclos’ Les Liaisons Dangerouses, taken from Christopher Hampton’s RSC play, is referenced more than once in the book. Readers can decide for themselves whether Caley is setting out his stall as flaneur or voyeur.

The book has five epigraphs, with a range of cultural referents mixing high culture and pop culture, including a verse from Texan singer-songwriter Townes Van Zandt. The record cover from which this is taken features a hippie couple kissing in a doorway, watched by the sardonic onlooker Van Zandt. Writer marginalised while the action goes on around them? There’s a word for that. But it does lead us to the questions around socio-political engagement, and how can a ‘mature’ poet carry on doing the same thing, either in ‘real life’ or in their writing. Caley is not Sean O’Brien or Ian Duhig, but neither is he a latter day Larkin or Geoffrey Hill. We could say that his persona in this book is that of a resident alien or time-traveller currently living in south London, but willing and able to take the reader anywhere at a moment’s notice. How much of this writing is really personal is open to question; there are certainly poems which we could call ‘love poems’ or poems about sex and desire, presumably the person name-checked on the back cover in Bloodaxe’s obligatory typo.

Formally, the book intersperses love poems, travel poems, poems juxtaposing life in south London with exotic locations, and single stanza poems. There is enough variety to reward re-reading, and the reader is given something to do with poems where the narrative elements are eroded or curtailed. I doubt if Caley is an admirer of Robert Frost, but the faux-Yankee farmer’s maxim, ‘tell the truth but tell it slant’ is put to effective use in these poems. Formally he mixes short lines with longer, and puts the venerable sonnet to work, and also uses the Tanka’s status as a haiku on steroids as a stanza form, not as stand alone form. Not a quatrain in sight. In ‘The Confluence of the Elba and the Upa’ for example, we might be in Bohemia and Brixton, where the poems opens

This provides one answer about how to do love poems these days, as does the next piece, ‘Skinny-dipper’, but Caley in ‘My Hypothetical Lovers’ allows his voyeuristic strain to surface, while in part 1 of ‘Foregone conclusions‘ the speaker announces I had the pleasure of Jeanne Duval thus introducing us to Baudelaire, Later poems give us Corbiere and Bonnefoy. In ‘Hither Green‘ we are told

So that’s that question answered. Caley’s interest in French literary culture takes the reader to lots of interesting places, reminding this reader of Richard Brautigan’s response to Ed Dorn’s Gunslinger: ‘It was a fine trip with some splendid scenery.’ Several American locations do feature, and Louis Zukofsky gets an honourable mention, but if Caley admires, say Frank O’Hara, for his wit, his way of juxtaposing elements in an apparently offhand manner, and his way of reminding the reader where the poems are written while discussing anything that comes to mind, his influences have been well sublimated. Occasionally, as with ‘My Mistress Doesn’t Like It When I Make Love To My Wife’ the reader might wonder how the other parties might have reacted on reading this piece, and exactly who was involved in I leave your bed, your / lain breathing body to dress, although given the undoubted presence of our old friend, the unreliable narrator, we should be too sophisticated for impertinent speculation. Caley is nothing if not a knowing, widely referential writer; let us hope no-one nowadays is either foolish enough to be a confessional poet or naive enough to read poems as the wrong sort of truth. Why should we assume that the writer ‘Matthew Caley’ has anything much to do with an actually existing Matthew Caley living in south London?

Whoever he is, this writer has a gift for phrase-making, is never mundane, and has thought carefully about how to use forms, or rather structures, in ways that keep them interesting, while giving the poems a more than mere formal interest. There is little by way of direct political engagement, but plenty of cultural engagement; these poems would have Brexiteers reaching for their Luger.