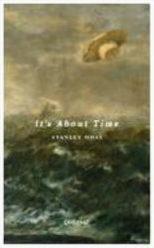 I first read Stanley Moss’s poetry in the New Yorker when I lived in the U.S. 30 years ago. I liked his work then and my appreciation has grown since reading his new collection, It’s About Time.

Moss grew up in New York’s borough of Queens. I spent my early childhood in Brooklyn and then in Manhattan, which all New Yorkers refer to as ‘the City,’ as if it’s the only one in the world. It’s in the sonnet, ‘A Kid in a “Record Crowd” ’, which I quote in its entirety:

Stanley Moss has scary youthful memories of what happened in Europe before and during World War II. He rebels against the cruel and senseless rivalries in the world, as in this poem, ‘Song of Jerusalem Neighbours’

with its extraordinary ending:

And in ‘The Gambler’:

And later, I cheat at cards Yahweh deals.

‘The Gambler’ is a poem that rhymes. Some of Moss’s poems are formal; some are not. He seems to follow wherever the poem within him leads. In ‘A Rose’: …Be a horse. Then you can discover/ a valley, the taste of a mare’s nipple,/ your coat moist with her three-year-old blood…’ And,  Our earth and sun don’t matter an onion/ to dark matter, places without address.

His ‘Children’s Song’ rhymes as children’s poetry should, and begins: ‘I wish I was two dogs, then I could play with me.’ (I wonder why the quotation marks here; maybe he heard a kid say that?) It ends:

Among the many poems in It’s About Time are those dedicated to friends and fellow poets – Dannie Abse and Christopher Middleton among them. These are moving, loving works. What I find extraordinary in Moss are his exquisite control of his material and his ability to surprise, even to shock, but always out of a love of the human animal, our natural parts, the way we use them.

There is a ‘Birthday Wishes’ poem addressed to someone 99 years old. Moss, himself, was born in 1925. The penultimate poem here is ‘Ubuntu’, a South African word defined as ‘the essential dignity of every human being’. The poem ends:

It’s About Time is a hefty book, 176 pages including a list of first lines. It’s by an angry young man who has lived long enough to know what he’s angry about. God grant him more years; more poems.