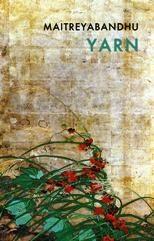 Ordained into the Triratna Buddhist Order in 1990, Maitreyabandhu was born Ian Johnson in 1961 in Warwickshire. Yarn, his second collection, is a wide-ranging and ambitious volume that re-visits and develops many of the themes first explored in his impressive debut, The Crumb Road (Bloodaxe 2013). Its title suggests not only the importance to the poet of narrative, but also the meditative thread that he weaves throughout his work. Yarn is divided into four sections. The first of these, The Travellers from Orissa, is the one which is most obviously informed by Buddhism and his ongoing quest to make sense of the world. Although the narrative mode frequently comes to the fore in short parables, sequences, and in two longer pieces: ‘The Cattle Farmer’s Tale’ and ‘The Travellers from Orissa’, the brief lyric also has an important part to play. ‘These Days’, the opening poem, is a meditation on natural phenomena, which has a philosophical depth transcending mere observation: our clever ways to be unkind / will spoil the morning, disinclined, // as we so often are, / to watch this equal sunlight sculpt the day … In ‘Sunday’ the poet evokes a seemingly unbridgeable gap between intellect and understanding: Someone has kicked the ladders away and yet the tension is resolved in a beautifully observed final image:

However, in ‘Postulant’ there is again a sense of dislocation: He felt himself to be the painful intersection / between two blissful worlds –

‘The Cattle Farmer’s Tale’, extending over six pages in relaxed blank verse, is the first of two narrative poems inspired by Buddhist scriptures. The cattle farmer of the title seems to be doing nicely, thank you, but finds that his life is changed when he is visited by an enigmatic vagrant;

What engages the reader’s attention, regardless of whether one shares the poet’s spiritual outlook, is the narrator’s homely tone and the poem’s convincing characterisation: the disconcerting wanderer and the garrulous, seemingly self satisfied farmer; Thirty milkers, … / … that’s how many / cows I’ve got. Equally absorbing is ‘The Travellers from Orissa’, which describes Tapussa and Bhallika who, according to legend, were the first disciples of Buddha. It’s a poem shot through with memorable images. To see the Master was like gazing at the sea. The heart of a man in turmoil is like a netted fish thrown up / upon a dusty bank and thrashing wildly; while, according to the Master, There is a thorn buried / in the heart of man.

By the time one has worked through Yarn’s opening section one almost feels that there is enough in it for a self-contained collection. However, having presented his themes in a mythological framework, the context changes in April Elegies and The Yard to one that is more recognizably autobiographical. The former consists of a sequence of poems written in memory of a friend, a fellow priest whose Polish family came to England as refugees. The poems are deeply felt and written in the elegiac mode used to such effect in The Crumb Road. ‘Name-giving’ describes the poet’s role as a spiritual adviser to his friend:

In ‘Two Drawings’, ‘Historia’ and ‘Zofia’ the poet recounts aspects of his friend’s family history. ‘Zofia’, in particular, is a stunning poem which ranges from the horrors of the holocaust to the mundane details of disposing of the deceased’s home in London:

In ‘His Funeral’ the poet again shows his ability to clinch his poem with a memorable image:

In The Yard the poet returns to his formative years, which will already be familiar to readers of his previous volume. Throughout these poems he reassumes his role as a memorialist of family lore, spinning his own yarns and passing on those he grew up with. They are lively vignettes rooted in post-war Warwickshire and on into the Seventies. Parents, siblings, and even the family dog, are deftly drawn, so that each scene comes glowingly to life, whether he is describing his brother’s obsession with paper lanterns or his father’s experience as a mechanic in the war:

The collection concludes with And Always, Somewhere, whose epigraph alludes to a tale of unrequited adolescent love: He seemed / a deeper aspect / of the place – / the boy I’d wanted / to embrace. It is presumably the same figure who appears with poignant finality in ‘You’: I’d go up to your house / but the gate is shut, / the garage closed / and all the lights are out. However, as in The Travellers from Orissa, the poems here are stylistically and thematically more varied than in the two more strictly autobiographical sections. ‘Reading Cavafy’ is an impressive homage to the great poet of Alexandria. ‘Birdsong’, ‘Winter Trees’ and ‘The Guest’ are timeless lyrics which show that English poetry has not quite exhausted the possibilities of rhyme:

Alongside these more traditional elements, there is also a set of prose poems. ‘Old Man and the Woods’ is enigmatic and painterly, while ‘Guide to Rain’ has a precision that reminds one of the Frenchman Francis Ponge. Yarn is a very substantial and varied collection which makes demands upon the reader. On first acquaintance one might argue that it’s a tad long and would benefit from some pruning, and yet it repays careful and repeated scrutiny. There is nothing fudged or factitious. In fact, ultimately, even its copiousness seems to enhance its authenticity, as if, inspired by the pressure of deeply felt experience, it all needed to be written.