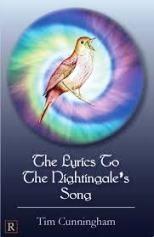 In keeping with its title, Tim Cunningham’s The Lyrics to the Nightingale’s Song contains quite a few poems about birds (and other wild creatures too). The book opens with a number of such nature poems; and the first one really to catch my attention is ‘The Lavender Bush Outside No. 19’ with its touching account of a bee which has

This rather bleak quasi-philosophical observation is neatly followed by ‘Where to Hide the Goldfish’ which (in a way that recalls ‘Thirteen Ways of Looking at a Blackbird’) gives a précis of the theories of eleven (not thirteen) renowned philosophers. As an example:

The book’s title piece is an eclectic list-poem which leads into a couple of warnings about eco-calamity: one touches on the possible disappearance of nightingales (even from the prestigious postcode W1J 5BE – look it up if you can’t guess where that is!); and the other predicts an even more serious extinction:

This poem, ‘The Lost Reader’, is neatly mirrored by another which appears towards the end of the book and begins I am the poem on page seventeen and then goes on to say

A large part of the book’s first half consists of elegies for family members and memories of childhood. These rather private poems gain accessibility when an inclusive note of confidentiality is allowed to creep in – for instance, the guilty confession Whisper it, but I have never / Much admired the Mona Lisa which comes at the start of one about a family portrait that none of us will ever see.

Here, as in the rest of the book, the poems are skilfully arranged and linked by a key word or image that each picks up from its predecessor. There is however a rather surprising change of tone when we come to a group which begins with ‘MWOAH!’ (which mocks plastic / kisses of retail therapy ladies in comparison with more intense and dramatic osculations like Rodin’s sculpture or Klimt’s painting) but then, rather startlingly goes on to very serious poems about the Holocaust, the 1916 Easter Rising and the death of Cunningham’s own father during World War Two. These darker and (sometimes) less personal poems include very powerful moments. ‘Black Triangles’, for instance, reflects on the particular symbols of condemnation that were sewn to the clothes of Romany victims of the Holocaust before dark magic made them disappear in clouds of smoke / congealing to black triangles above Auschwitz. A poem about the arrival of news of Cunningham’s father’s death, begins with haunting poignancy

As he did his rounds, that messenger boy in 1944 might well have felt responsible for releasing all the troubles of the world. And we too might feel that it is better to close Pandora’s box again and not dwell on painful pasts: but Cunningham refutes this in ‘Telescope, 1916-2016’ and declares that looking back, we are not turned to salt / but peer through salt’s corrosion.

Cunningham looks back several more times to his father’s death; and the way it continues to perplex him is well caught in the opening to ‘Gethsemane’

Again in ‘Ghost Writer’ he attempts to respond to his father’s last, dictated, letters from hospital; and it is clear that he still carries what that 1944 telegram brought him: I dip my pen in the ink / of absence.  It is in such poems of loss that Cunningham produces some of his best work. And his sensitivity extends to loss experienced by others. ‘Lost in Transit’ deals with a young Irish woman taking an impropmptu flight to London when it wasn’t even Christmas / or the sales. The truth about her visit, which leaves her holding back the tears, is explained as being something lost in transit. ‘Audition’ begins After the accident he was never / quite the same and goes on to tell how time after time … he failed every audition to become himself. And he is not the only one to suffer. His wife

The Lyrics to the Nightingale’s Song is frequently illuminated by such deftly expressed compassion for human frailty and vulnerability.