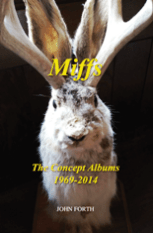 Stories have been told since they were possible, and people been miffed, in and out of them. Or so one imagines. It’s hardly surprising, then, to find a poet born and raised in Bethnal Green jumping at the chance of merging the two, and, anyway, it’s an odd tale that doesn’t involve a spat somewhere along the line. Myths hold significance for those who tell them, a significance that may be sacred or profane, but either way they are concerned with ‘truth’. Now stories can be dressings-up, or obfuscations, or downright lies. It’s what the world of advertising has led us to expect, so one of the many points of interest in this collection of poems that did not all make it into John Forth’s other collections (though many did) is how modern readers now respond to myth. The miffs found here reach out to include legend, folktales, theatre and that more recent medium, film. There’s a very readable and entertaining autobiographical essay at the end that shows the poet to be well aware of various responses to myth in the modern world. It also explains how this collection came into being, especially as it was published alongside Low Maintenance: Selected & New Poems (Rockingham Press) last year. In some ways it’s a Not the Selected, though its contents are drawn from the same period of overview. The opening section, for example, might have been Forth’s first collection had David Perman at Rockingham not favoured Malcontents (1994).

Perhaps Perman simply preferred the Malcontents poems (Forth briefly discusses this, too), but there may have been another reason, more directly concerned with myth as subject-matter. For miffs are not the poet’s stories, or at best they are the poet’s stories refracted through the myths that encompass them. What makes this of particular interest is that, while the opening section, ‘Spirits of Another Sort’ (the title of Forth’s 2013 Honey Pot Press collection) reflects on love and lovers through the various mirrors of A Midsummer Night’s Dream, the themes of waking and dreaming are universal, so it is not necessary to know the ins and outs of Shakespeare’s play. In other words the intervening layer does not get in the way. It does not have to be seen through to find a significance for now. One of the poems in this section celebrates what gets lost (or gained) when cockney Puck (he’s from Bethnal Green, too) decides to intervene in stories that are usually the property of ‘old codgers’ (‘Puck’s Account of the Damage’), but others could be about any lovers waking or musing, not just Shakesperare’s; and Oberon and Puck may be ace manipulators but their tricks are like the vicissitudes of chance we all recognize. These are poems that will generate the response, ‘Yes, this is what love is like’. Here’s a cutting from ‘Weeds of Athens’:

Nearly all the poems in this opening section turn on a sixpence like this and how many sixpences Forth finds to turn on becomes quickly impressive. Yes, love is like this, or a certain kind of love at any rate.

So far, so good, but the terrain becomes slippery and a good deal rockier in the ‘Impostors’ section, a sequence of unrhymed fourteeners based on Arthurian and other British myth – what Herbert Lomas in London Magazine once called ‘angst-ridden legerdemain’ when they appeared in Forth’s second Rockingham collection A Ladder & Some Glasses in 1998. The word-play and double-think evident in the first section takes centre stage in the second as helpless impostors justify their own two faces whilst punishing the hypocrisy of others – in the kind of scenarios one poem celebrates and dismisses as ‘ideals kept afloat by transgression’. This section ends with a much more recent take on The Mabinogion in the tale of Culwych & Olwen, in which a more worldly narrator attempts to adopt the necessary contortions for adapting some outrageous material, even by the standard of other ‘miff’. And what’s slippery and a good deal rockier might be exemplified by taking a close look at the section’s opening poem:

The first observation to make is that these two nine-line stanzas together form a carefully crafted poem, full of connections both sonic and semantic. Indeed it is a poem that presents itself as polysemic. The structuralist will quickly focus on its oppositions of passion and grief, seeing and not seeing, inner and outer, air and earth, sky and land, illusion and reality, home and travel, plan and serendipity, abstract and concrete. And all of this without ever getting close to ‘getting’ what the poem is about. It makes for a nice conundrum, but it is also revealing of a general approach.

The title refers to a Greek word meaning ‘tail-devourer’ and here, as a note has it, it’s the never-ending snake worn in some versions by Guinever (the poet’s preferred spelling). The tail-devouring ouroboros is one of the world’s most ancient symbols of, inter alia, the cyclic nature of the universe, creation arising out of destruction, life out of death. We know we’re in the world of Arthurian legend because the poem is the first in a section called ‘Impostors and Other Myth’ which carries an introductory note which posits it as a contrast to the first section based on Shakespeare’s Dream. But why should Guinever be wearing such a snake-symbol?

What she sees that the speaker doesn’t is, presumably, some sort of plan that ensures that ‘Whatever’s / out there has to come good in the end’. She seems to be at ease whatever is going on around her, even with the fact of her own mortality. The oscillation between the two extremes of chaos and order, between helplessness and control, are symbolised by the duality of creation and destruction embodied in the ouroborus. Order is apparent in a world seen from the air but in the randomness of being on the ground it’s best to go with the flow without a plan (which will lead presumably to disappointment)

The naked eye of the groundling cannot see what the telescoped eye can see. That ‘the illusion of space / is real enough’ is a nicely-turned thought that remains less than clear (to the naked eye, one supposes). Nor is it clear why shadows should yearn (except for life); and dreamers ossify because they are effectively doing nothing. Lovers, lost in promoting their own relationship, are properly alive and taking the kinds of risk that ensure life. They sail closer not to the expected wind but to ‘the bone’ of ossification. These are the kinds of connections poetry revels in. And there are those who have time not on their hands but ‘to kill’, an ostensibly alarming image, who are spending that time (against the opening stanza’s advice?) ‘planning / to wander’, which is some kind of oxymoron, one supposes. There is another surprise in store for they appear not only to be planning not to plan but to wander, to wind free ‘of any one path’, but also not to be on land at all (indeed, to be planning to avoid all ‘glimpses of land’).

It’s good fun following all these leads and connections, but readers may well find themselves still wondering what it’s all got to do with Guinever (if they could see this, they’ll tell themselves, they could more easily see the poem’s universal meanings) and, indeed, what all the connections have to do with one another. They will ask themselves whether there is a connecting thread they have somehow missed that would enable them to climb on board the poet’s train of thought. I’d still be trying to insist that it’s a good poem, but I’m not sure I could help them with any of the other difficulties.

Sections III and IV cross over into the twenty-first century and contain sequences related to screen-miff. Flea-Pit Souvenirs is a kind of autobiography told through film, of the kind also attempted in ‘Selected and New Poems’ (which includes a view of early Tarzan movies seen through young eyes, playing off Scott and Weismuller in a grown up class war). Everything from The Ten Commandments and Moby Dick to Daphne Du Maurier’s Scapegoat (a modern TV production) is plundered for its autobiographical potential. In the latter, a tale of John and Johnny, two faces of the ‘fifties exploring the nice and nasty potential evident throughout this collection, is a final word on the dysfunctional family. Paradise Mislaid comes in three parts, beginning with Hell in a Handcart (a subliminal reference to a moment in Impostors where Guinever is disgusted with Lancelot’s shame about his wagon) and ending with The Silver Screen which is a knockabout ‘thirties sequence, a mix of Raymond Chandler, Robert Mitchum and Louis MacNeice by a narrator who both identifies and distances himself by saying

Later he’ll reply to an enquiry from one of his characters saying: ‘People call me Farlowe, which I think is a kind of joke.’ Our man is a private dick of course, but he’s also a literary hack who’s hoping for a break and sounds a lot like Robert Mitchum:

There’s a road-movie rumbling along under the narrative, in which one of his people says ‘maybe it’s time someone did for the car / what Hopper did for night or Brief Encounter for trains.’ A surprise bonus at the end of the sequence shows the narrator revealing that some of his ‘hokum’ is borrowed from Louis MacNeice as well as the Hollywood stars readers might recognize more easily. The central part of Section IV, ‘Paradise Mislaid’ itself, is home to some of the more traditional miffs such as Pygmalion, Narcissus, Orpheus and Ulysses, all of them given a computer-age makeover without sacrificing the original narrative. Exceptions to this would be The Blind Beggar’s Daughter of Bethnal Green, a refurbished anonymous Tudor ballad presented as a relic from the author’s home territory, and A Secular Comedy embracing Hell, Purgatory, Paradise and ‘On the Terraces’ – suggesting that the football fan knows a bit about all three. The blind beggar story is an excellent if forgotten vehicle for examining the constraints of class together with the romantic by-products of knights falling for paupers who turn out not to be paupers after all. Traditional, too, then.

The fifth and final part is ‘Having the Last Word’ which includes poems dressed up as conclusions. ‘How Did We Do?’ is a skit on contemporary feedback horrors being applied to the chaos of A Midsummer Night’s Dream. Another uses more Mitchum material to undermine what otherwise can’t be parodied – rather as the Coen Brothers’ Hail, Caesar! dispatches Hollywood and the Communist scare of the ‘fifties into comic history. There won’t be too many collections placing C H Sisson and Joseph Brodsky side-by-side with a TS Eliot football parody borrowing from something said by Harry Redknap, or, if you like that sort of thing, St Bernac’s Well, the note for which identifies it as ‘a compost of contemporary Americans’.

So, this is not a ‘Selected Poems’ but it rides shotgun fairly successfully, with another set of ambitions entirely. Forth hints at this in saying that it’s a collection of work passed over by editors and journals of the period because, post-Larkin, we learned to distrust anything that leans on other art. We also learned a similar and even possibly related unease about the kind of irony that drips from every page of this hefty book. It’s a territory that its author obviously loves being in, or, as Huck might say, ‘lightin’ out fer’. In that sense, it’s nice to see so much of it gathered under one roof, a way of prematurely saying goodbye to ‘an age of serious’ perhaps. Let’s finish with a narrator who knows (as does the poet) the dangers inherent in what he is about: