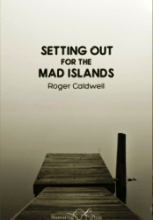 At the age of sixteen, Roger Caldwell answered the family’s front door and found two senior police officers on the doorstep. Some poems he’d had published reminded them of a murder under investigation and they wanted a word. It did not take them long to realise that Caldwell’s poems were the work of teenage imagination – he was not their culprit – but the experience left him with a powerful sense of poetry’s consequences. Little wonder he wrote in 1993 (in Philosophy Now magazine) that this loss of his ‘poetic virginity’ inhibited his ability to write about his inmost self. This may explain why so many of the poems in Setting Out for the Mad Islands (subtitled ‘Poems of Two Decades’) are highly polished dramatic monologues in voices ranging from Auden to Woolf.

Caldwell revels in the territory between what we say and what we mean. Here in ‘The Velvet Band: A Tale from the Fin de Siecle’, we are at a diplomatic dinner table: The doctor on her right /will only speak in English (or what he considers to be English), even his moustache/ is resolutely Anglo-Saxon. To her left the Chinese parable is still drawling on, although by now/ more hesitant and fragmentary than before, through intermittent teeth. Caldwell then moves his exploration of nuance deftly into this woman’s marriage: Her husband, she’s aware, can’t keep his eyes/ Away from her: he knows she’s looking at her best tonight and will maybe never look as good again. / He suspects that she’s discovered something.

Nietzsche’s concern in ‘Nietzsche Contra Grammar’ is more with the political power of words:

The collection’s second section runs us through human history from the Stone Age to the toppling of Saddam Hussein’s statue in 2003. ‘Orichalc’ is a poignant contemplation of our fragility:

The range of subject matter and tone is extensive. ‘Drawing the Line’, a few pages later, takes us into the Cave of the Golden Calf, a notorious night club opened in 1912 off Regent Street (the sort of place Antoine Blanche from ‘Brideshead Revisited’ would have called home). It was owned by Frida Strindberg who is busy dropping names in this poem –Mansfield, Nijinsky – when,

In the middle of Caldwell’s stroll through human history, he reverts to dramatic monologues, given this time to Jerome K Jerome, Henry James, Woolf, Greene and Auden, as if our story is not complete without the voices of writers. In ‘Virginia Woolf in War-time’, parody is difficult to avoid but the poem arrives beautifully as Woolf wrestles with the impact of war:

In the third section the poet’s own voice seems to emerge more, with some excellent poems that would perform well. ‘A Defence of Essex Against Mere Prejudice’ denies that Essex men / have shaven heads, and numerous tattoos:

‘John Steed in Retirement Remembers Mrs Peel’ is a wonderful ramble by the urbane Avenger – I’m no longer the John Steed you remember, / but one awash with wine and pleas and hesitations – wondering if after all the years they dare address each other by first names:

Is this the poet himself at last? Impossible to tell but, as he says, what does it matter? Whatever the truth, Caldwell always writes with elegance and wit.

.
Rosie Johnston’s three poetry pamphlets are published by Lapwing Publications (Belfast), the latest Bittersweet Seventeens in March 2014. Her poems have appeared in various magazines and she was commissioned to take part in Live Canon’s ‘154 Project’ celebrating Shakespeare’s 400th anniversary. She is poet in residence for the Cambridgeshire Wildlife Trust. www.rosie-johnston.com