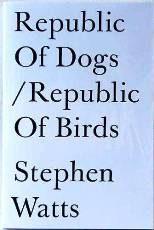 In the late 1980s poet and translator Stephen Watts composed a series of numbered notes on his typewriter, bringing together two places where he spent time: London’s Isle of Dogs and the Hebrides. The typed pages went missing and were forgotten. In 2012 they turned up and now, following light editing, Test Centre has published them with the title Republic Of Dogs/ Republic Of Birds.

Watts is a poet and translator with a wide international reputation. He has worked as a poet in hospitals, schools and centres for homeless people with a particular interest in how language divides and unites us. In 2014 Enitharmon published his collection Ancient Sunlight following several pamphlets and collections, some bi-lingual.

Republic Of Dogs/ Republic Of Birds feels like a handsome reproduction of a fine artist’s sketch book where some pieces are in preparation for other work (Popa the Ukrainian in 6 is developed in Ancient Sunlight, for example) but they all have grace and depth. Where they have been left a tad unfinished, the introduction tells us this is ‘mostly intentional (aren’t our lives as well)’. For Watts, it is wildlife that brings Shetland and Dockland together, especially cormorants who, like the poet, are at home in both places. First in the Isle of Dogs:

… three or four together going off in their flat arcs, their distended segments of flight across the beck of the Island: such flight showing they sense the shape of the earth. (1)

Later in the other context:

And two cormorants flew straight out of the sun – black, black, black, charred pieces of air and veered past the convening rock and looked back and swerved their bodies out toward the nesting cliffs and clamour. (75)

In this poet’s unified world, cliffs could just as easily be glass facades (93). Gulls come together with aeroplanes, herons, with builders’ cranes; and the Thames is a place of iron fish (93) surrounded by artificial icebergs of the new and capital intensive age (132). Watts is describing the Isle of Dogs (Republic Of Dogs) in the heat of its 1980s transformation from wasteland to mini-Manhattan where a dead sheep on a slipway of the dockland river (18) brings him up sharp:

How much these docks had been changed. In less than five years. When they were closed down you could hardly get inside at all. Now they had been metamorphosed, not as rocks are but as money does.

He reflects in the third person – Today, Tuesday, he had decided to move on (7) – as if to his younger, departed self. Many of the notes, particularly in a mid-section about the glories of food, are second person, as if he’s talking to close friends:

Pancakes! … Eat them. Love to eat them. Eat them with gusto, I beg you. Forget about your hungers, whatever they are, shoved into you by the blasts of the world. If you are fortunate enough to have them in front of you, just eat. Preferably from a table spread with a fresh cloth and with a shot of vodka or grappa after each one. (53)

What the East End lacks in architectural beauty, it more than makes up for in human diversity:

Let me take a jackfruit home and share it with friends and un-friends on a large table, for it is not of this city & (sic) yet is in this city and it satisfies my sudden pang for elsewhere than here, my urge to get suddenly and depart. For it lets me know the lovely taste of other lives. (52)

Among the riffs on the natural world (and there are some stunning descriptions of rock pools, mountains, horses) are character sketches, snippets of overheard conversation and jokes. At the heart of these exquisite prose poems is our paradoxical need for both home and adventure – Because to breathe is to be forever on the move (7) – and after sifting evidence for and against, Watts knows where his heart lies:

Those places that are the most remote, don’t kid yourself. They are the closest to hand. They are the heart of the world. They are its innermost ventricle. They are where the blood has its home. They are the inner ear. What does not sound truly elsewhere will be heard in its stillness there. What is heard out of silence there will overwhelm the noise of the cities. (13)

Rosie Johnston’s three poetry pamphlets are published by Lapwing Publications (Belfast), the latest Bittersweet Seventeens in March 2014. Her poems have appeared in various magazines and Live Canon’s ‘154 Project’ celebrating Shakespeare’s 400th anniversary. She is poet in residence for the Cambridgeshire Wildlife Trust. www.rosie-johnston.com