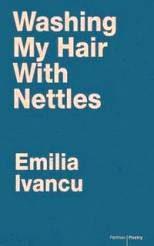 Emilia Ivancu’s poems have been translated into English from their original Romanian by Diarmuid Johnson. The originals have already been published in book form so are not presented alongside the English translations. This makes it difficult to see how closely the translations have followed the original forms or sound patternings in the originals. In the title poem,

The poems focus on myth and legend within nature or human interaction with nature. In “April Snow” the poem’s narrator is watching a herd of deer in heavy snow,

The choice of the Scots word “ken” rather than “knowledge” is a surprise here. “Knowledge” echoes the sound of “village” and “to the limits” is redundant because “ken” implies “range of knowledge” rather than just knowledge”. Without sight of the original poem, I don’t know if the translator is being literal or using the spirit and sense of the original rather than a direct translation. “Two Women of Armenia” looks at human nature,

There’s some light relief too, in “Harmony” written after listening to guitar and flute music in Râmjeti, Romania,

Translations of poetry are always welcome. They broaden perspective and appreciation of literature and what poetry can do. I appreciate there are copyright issues and expense involved in producing a book where the original poems are presented alongside the translations. However, I felt as if I couldn’t read these poems too closely because I didn’t know what approach the translator had taken, whether the focus was on the accuracy of literal translation or whether the focus was on maintaining the rhythms and sound patterns of the original. This shouldn’t detract from the poems themselves which demonstrate a respect for nature, spirituality and mythology.

Emma Lee‘s Ghosts in the Desert was published by Indigo Dreams. She was co-editor for Over Land Over Sea: poems for those seeking refuge (Five Leaves, 2015) and blogs at http://emmalee1.wordpress.com.