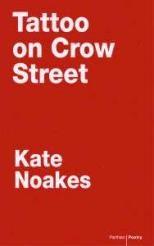 Kate Noakes’ collection is an exploration of tattoos, mostly inked, which looks at the reasons for getting a tattoo and the effect of having a tattoo on a person. The question of marking and ownership is examined in “A cure for the shop assistant” who is suffering from unrequited love,

Readers don’t get to find out why her love is unrequited – is he unavailable or not in love with her? But the force of her feeling is documented: that diamond branded on her neck is more permanent than a flashy rock on a ring. The colour blue is significant too. In traditional folklore, getting married in a blue dress (in times before white was the norm) meant the bride was marrying her true love. Natural blue diamonds are as rare as the perfect love the shop assistant is dreaming of. After such a fantasy, love in real life would only be a let-down. Each tattoo is unique to its wearer, even the same design on different skins would look different, and “This poem wants to be” explores thoughts that go into designing a tattoo,

The poem wants to be read to the rhythm of a heart’s tattoo. A different kind of tattoo is looked at in “Katrina and the lily” where the hurricane,

The actual process of becoming inked by a professional is not investigated, although the owner of an unprofessional tattoo, created by a compass needle and filled with blue ink, hides it with a watch strap in “Indelible”

Most of the poems explore women’s tattoos. Men’s tattoos are observed and their reasons speculated on rather than voiced or detailed. The subject is those who have voluntarily tattooed themselves. Slave and prison tattoos are outside the locus of this volume and would dilute its purpose. Tattoo on Crow Street sticks tightly to its theme and is stronger for it. The voices and stories feel real. The tattoos themselves come to life in a focused, sensual collection.

Emma Lee‘s Ghosts in the Desert was published by Indigo Dreams. She was co-editor for Over Land Over Sea: poems for those seeking refuge (Five Leaves, 2015) and blogs at http://emmalee1.wordpress.com