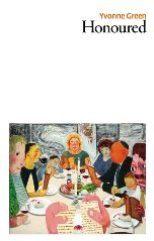 Yvonne Green may be familiar to regular London Grip readers: her poem ‘The Poetry of Propaganda’ appeared among this magazine’s new poetry in spring 2015; and her translation of Russian-Jewish poet Semyon Lipkin’s poetry (the Poetry Book Society’s Translation Choice for winter 2011) was reviewed here in 2013. Her first pamphlet ‘Boukhara’ won the Poetry Business Book & Pamphlet Competition in 2007 and her first full collection ‘The Assay’ (2010) appeared in Hebrew in 2013 after she won translation funds from Lord Gavron and Celia Atkin. All are published by Smith Doorstop. Green is much in demand as a poet in residence, her positions including the JWA Women’s Refuge, Norwood Ravenswood, Casa Shalom, Spiro’s Ark and The Global Foundation for the Elimination of Domestic Violence.

Green retired as a barrister in 1999 to concentrate on her poetry, and a sense of justice pervades her words. ‘Honoured’ falls into five sections with overarching themes of war, exile, survival and resettlement.

The first section ‘This Is Not Your History’ leads us relatively gently to a world of Polish builders in London whose calloused hands embarrass / the families they try to build futures for. ‘Magic Carpet’ muses on how it used to take a whole family to make a Qum carpet by hand – children’s fingers are the most flexible – and on the tensions between that generation and the resettled next one:

Her second section ‘That Kind Of War’ takes us deeper into the impact of hostilities, one of the strongest being a revised version of ‘The Poetry Of Propaganda’ (mentioned above). It starts with The sound of truth dying, / Death made holy and finishes with this jolt:

One of my favourite poems in the collection is ‘Akyn’, a clear, well-paced narrative about Stalin’s elimination of Ukrainian traditional poets and singers, based on Shostakovich’s memoir ‘Testimony’. An Akyn was an improvisational poet and singer among the Kazakh and Kirghic people who with other traditional poets and musicians became chaff to be mulched and limed invisible. Having lulled us with the trembled sinewed songs and musical names of those old instruments – kobza, basolya, lira, / sopilka, trembita, drymba – Green brings us up short with their fate:

Green tells in her father’s voice about his time spent in concentration camp in Aquitaine, south west France:

Her father came here hooked to the side / of a Douglas Dakota after Paris was liberated, she says in a beautiful second-generation poem, ‘Welcome to Britain’:

The section called ‘Think Of Her’ concentrates explicitly on the fates of women in wartime, yet Green finds hope in the resettled life:

The section called ‘Honoured’ takes the feminist theme deeper into domestic violence, arranged marriage and the silencing of women across centuries in many societies.

Here is Green’s conversational style, a kind of folded-arms vernacular yet with every word earning its keep. This collection is not an easy ride but could not be more timely.

.
Rosie Johnston’s three poetry pamphlets are published by Lapwing Publications (Belfast), the latest Bittersweet Seventeens in March 2014. She also writes fiction and journalism, facilitates writing groups in London and Cambridge and is Poet in Residence for the Cambridgeshire Wildlife Trust. www.rosie-johnston.com

A Festschrift for Barry Cole William Cowper: A Revaluation