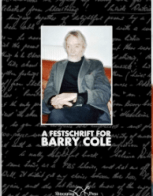 Merryn Williams has her curiosity aroused by a tribute to the late Barry Cole – one of a number of recent Shoestring Press books celebrating undeservedly neglected poets.

Barry Cole (1936-2014) was once a well-known poet and novelist, admired by many people including Philip Larkin who included one of his poems in the controversial Oxford Book of Twentieth Century English Verse. Yet Cole never had a job in the literary world, apart from two years as a Northern Arts Fellow at Durham University; and in 1973 he was so shocked by the suicide of a friend that he practically stopped writing and his reputation faded, as reputations do. I – along with most other people, I suspect – had never heard of him, but he had many distinguished friends who were determined that he should not be forgotten and they have put together this anthology.

It gives a fascinating impression of the man. There are poems and memoirs by Michael Bartholomew-Biggs, Alan Brownjohn, Martin Dodsworth, John Lucas, Nancy Mattson, Tom Paulin, Hugh Underhill and others who knew him well. Barry’s own poems are not included, except for thirteen ‘broken sonnets’, a unique form in which the poems are deliberately left incomplete. They are autobiographical and summon up a bleak post-war childhood, remembered only in fragments, beginning in the pram and ending with the death of his mother. ‘School Dinners, Circa Winter 1946-7’ runs:

This is how you are meant to read it. The editor, John Lucas, explains that the gaps and repetitions ‘are intended to suggest gaps in memory or the difficulty of exact recall’, and perhaps the poet is also blocking out painful experiences.

I must find out more about him. There are plenty of poets who write excellent things but somehow slip out of memory because they are not very good at promoting themselves. There is very little of Barry Cole’s work to be found on the web, but to help you make your mind up about tracking down one of his collections mentioned in this Festschrift, here (taken from the website http://www.tandfonline.com/) is one of Barry’s poems, this time not broken:

Merryn Williams was the founding editor of The Interpreter’s House. Her third collection, The First Wife’s Tale, was long-listed for the Welsh Book of the Year; a fourth collection Letter to my Rival was published in November 2015.  Her biography, Effie: A Victorian Scandal: From Ruskin’s Wife to Millais’ Muse, was turned into a Random House audiobook this year