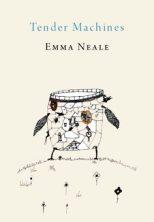 The “Tender Machines” of the title poem are described by

Emma Neale’s poems are wry observations on the pluses and minuses of family life – as a child and a parent – and the adaptation of family structures to technology. She uses familiar situations, as in “Cyberbullying”, where Siri fails to understand a Kiwi accent and the frustrations of having to fill out a captcha form to prove you’re a human and not a bot, to illustrate a point. Her poems are compassionate too. “Origins,” about parents, ends and even when love creeps close / over the slanting floorboards,/ sorrow drifts in with the smell of snow/ clustered on its skin.

In “A Very Bad Day” we learn that as one person Googled ‘how to stay in love’,

This poem picks up the irony of combatants wanting to prolong the day rather than slipping off to bed and hoping tomorrow will be better. The irony is underlined as short “i” vowels give way to longer vowels, signalling a change in rhythm. In “Slipknot” bridal veils become

The focus here is on what links us to who we are and who we connect with, both voluntarily (lovers, friends) and involuntarily (blood relatives). In “Slice of Life” subtitled “Cast List: In Order of Appearance” the link isn’t silk but a Little Boy Dropping Homemade Cardboard Sword and Leaving It on the Sidewalk which ends

“Groyne” sends up the description of a piece of artwork:

The footnote reveals, * In keeping with the artist’s intentions, the children’s names appear here without their consent.

The artwork is more probably a primal scream of narcissism rather than a lament for a lost marriage. That the artist doesn’t apply for custody of her children but is prepared to name them in total disregard for their privacy and without considering asking their consent, shows someone who fails to consider consequences or how unsympathetic a character she now appears. Emma Neale’s poems, for their part, are tender character studies.

.
Emma Lee’s Ghosts in the Desert is available from Indigo Dreams Publishing. She blogs at http://emmalee1.wordpress.com and reviews for The Journal, London Grip and Sabotage Reviews.