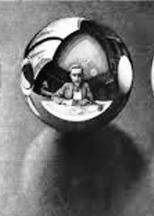 The familiarity of Escher’s work contrasts with his obscurity as an artist and a person. This exhibition is the first devoted to his work that has been held in England (it was previously at the Scottish National Museum of Modern Art) and there is apparently only one image on public view in the whole of the UK. The familiar images are all here, but set in context and supported by many others that illustrate the full extent of Escher’s genius.

Escher initially trained as an architect, but his talents as a draughtsman and printmaker were recognised by his teachers and he switched to the decorative arts. Early works, based on time spent in Spain and Italy, illustrate some of the features that persist through his entire output: peculiarities of perspective, with unusually high or low vantage points; multiple vanishing points; the rarity of a central subject – every aspect of the image is of equal importance and an essential part of the whole; the importance of pattern, and meticulous attention to detail.

In the first room, the early ‘Portrait of Pieter van Zulphen’ suggests influences from van Gogh, cubism and art nouveau; later images have a surrealist aspect to them, although there is no evidence that Escher was ever part of the surrealist movement. ‘Freighter’ and ‘Porthole’ reminded me of the Ravilious exhibition that preceded this one, but most of the prints on display are uniquely Escher, many capturing his skill in challenging the observer to realise that a three-dimensional depiction has been created in two dimensions. 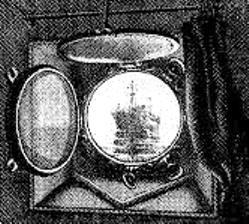 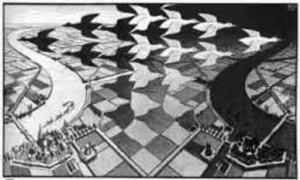 The three metre long ‘Metamorphosis II’ (shown in header image) depicts labels with white lettering on black merging through chequers, frogs, honeycomb, bees, fish and birds, through an image of an Italian town in which a gate tower changes to a castle on a chess board and so back to the labels bearing the title of the composition. There is a 42 metre long version at Amsterdam’s Schipol’s airport. Another characteristic of Escher’s work is his use of reflective surfaces, as in ‘Three Spheres II’. And the attention to detail is illustrated in some cases by the presentation of preliminary sketches – works of art in themselves – that accompany some of the exhibits. 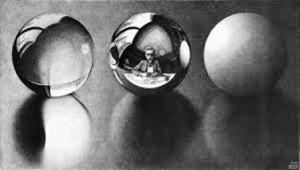 My favourite – at least on my visits so far – is ‘Snakes’, Escher’s last print, created when he knew he was approaching his life’s end.  Three snakes are intertwined with themselves and with an intricate pattern design resembling chain mail.  Escher did his own printmaking, and in this masterpiece, he used three blocks to print in three colours, each used three times. The precision involved in its creation is breath-taking. 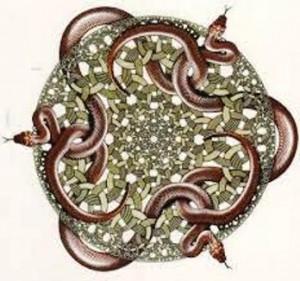 It is easy to understand that Escher shunned publicity. He preferred peace and quiet, and when his work achieved considerable popularity in his later years, particularly in the USA and among the hippie community, his response was to increase the price of his prints to try (unsuccessfully) to stifle demand. It is said that he turned down a request to design the cover for a Rolling Stones album because he had not heard of them. His story is well told in this exhibition, and the popular images achieve greater status through being shown in the context of his work overall.