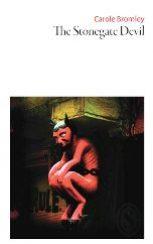 How long have Carole Bromley’s poems been among the first I turn to in magazines? This collection (her second full-length one) opens with the title poem, and the devil prominent on the cover: black-horned, painted red, the traditional sign for a printer’s shop, and representing the continuity of Stonegate, one of York’s medieval streets.

The historic past shares the same geographical space as twenty-first century commercial life via images name-checking the new shops: .. a couple choosing a ring in Walker and Preston’s; … the gear in Old Guys Rule; … the eggs / in Betty’s display: this is modern York. But there’s a reminder of the continuing uncertainty haunting city streets in the final stanza

Bromley lets this undertone of menace run on in the following poem: ‘formerly Mad Alice Lane’, the originally named for a woman hanged for poisoning her husband – … or possibly / just for having the gall/ to go round the bend. It’s a handy short cut to the necessities of modern living –

Colloquial speech and idiom, the rhythm of a natural speaking voice, a shaping intelligence that seems effortless: these are the hallmarks of Bromley’s work, whether writing about place and history or about her own experience. Her poems are companionable, sharing the relaxed syntax of everyday conversation. She’s good at opening poems in a way that invites the reader into the same space: The air is so still. Still as me sitting here / half-way up the slope. (‘On the Road to Sheepwash’); My hairdresser doesn’t really get poetry; (‘Stylist’); You talk of the first course like we’re discussing entrées. (‘Acute Lymphoblastic Leukaemia’). Turning the pages, I realise I could pick any poem as an example.

As for subject, the poems range widely, but with an unobtrusive structuring that holds the collection together. They stretch from closely-recalled childhood memories through the urgency of adolescent love to poems focussing on the deaths of the dedicatees (her close friend Ros, and Bromley’s mother) while looking outward – other lives, travel, a lot of fresh air. ‘Tom Makes His Mark’ describes how in 1794 an apprentice glazier secretly adds his own graffiti to a stained-glass window – … for a dare and to win a girl. – confident that it will remain hidden … for a century or two. In ‘Plumbers, the young men … bring their own snap/ which they eat with unwashed hands / as if they’d never heard of germs. In ‘Eleanor Marx Translates Madame Bovary’ the translator is … not sure whether club foot is right/ and fears she’s made the husband/ less than sympathetic.

A couple of poems are ‘after’ other poets, always a tricky area. For readers with Dennis O’Driscoll’s voice lodged in their ears, ‘Rendezvous’ – which takes O’Driscoll’s format of misunderstood meeting and Dublin supermarkets – will disappoint. But my ignorance of the original for ‘Cloughton’, (after Andrew Waterhouse) is a bonus: untroubled by prior knowledge I can enjoy the Bromley’s engaging use of denial and negative and feel no need to look up Waterhouse and the source. We did not go there that day,/ or any other. You never helped me/ over the fence. In the three stanzas this poem of contradictions creates its own story.

One poem made me yelp with delight and recognition, so here it is, in full. The combination of solitude, writing, that ‘humming’ when it’s all going well – along with the concept of can’t-be-arsed leftovers (a phrase so good it should be picked up by Oxford Dictionaries immediately) – make ‘A Paean to Solitude’ an affirmation of the joy of living with words

In his Letters to a Young Poet, Rilke advised the cultivation of an inner solitude as an essential for any poet; he didn’t express it as memorably as this. In a collection filled with real people and the buzz of ongoing life with all its conversation this poem is a reminder of the other side, the necessity of stepping away and maintaining the joy of writing.

The closing poems bring out Bromley’s strengths. Without sentimentality she matches her use of natural speech rhythms to the apparently small actions that surround dying and loss. ‘Acute Lymphoblastic Leukaemia’ shows us Ros, close friendship and how to handle bad news; on the facing page ‘When I Heard your Chemo hadn’t Worked’ we read the outcome. This poem about displacement and an unnecessary activity (picking blackcurrants) reveals one way of dealing with the title’s blunt truth.

The details – rain, her bike, the distances – all contribute to the urgent telling voice. These five poems move unobtrusively between first person (reaction) and second person (addressing Ros directly) while allowing space for the reader’s recognition of familiar feelings – If you hadn’t died I would have rung you / and told you how wet my feet were (from ‘Seat’ for Ros). There is a bleaker spareness in the poems about her mother, hospital-bound and wishing for home – I can’t meet your eye/ for the guilt of not/ making it happen – as well as recognition of the comfort coming from other family members. The final poem in the collection, ‘Advent’, is a celebration uniting her mother and her lost future – these the trees she’ll never drag indoors,/ these the holly berries rimed with frost,/ this the crisp earth cracking underfoot – but also affirming the continuity of Christmas preparations and their tangible reality in the closing stanza.

Vivid, immediate sensations are brought into play with short sentences: Bromley uses these to lift the final poem from loss into a future that contains the now-ness of this warm kitchen, combining darkness and love. It’s a satisfying end to a fine collection that has clarity and warmth, and which wears its depth lightly.

D A Prince lives in Leicestershire and London. Her first full-length collection, Nearly the Happy Hour, was published by HappenStance Press in 2008, and a second collection Common Ground appeared in autumn 2014 and won the East Midlands Book Award 2015 (judged by Blake Morrison).