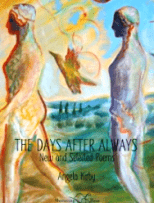 The London Grip review of Angel Kirby’s previous collection A Scent of Winter praised her ability to deal with life’s minor mishaps and major tragedies using either humour (both broad and rueful) or perceptive and steadfast honesty. Kirby’s latest book The Days after Always is a ‘New & Selected’ and shows that these twin skills – and the wisdom to choose between them – have also been a feature of her earlier work and continue to be so in her most recent poems.

The first section contains the new poems and it begins in headlong fashion with ‘For all the following’ which is a breathless poem of thanks from which we learn a lot about the themes Kirby plays with throughout the rest of the book. As a poet, she is grateful for her laptop spellchecker and printer which

There is much more to Kirby’s poetry, however, than such light-hearted and verbally dextrous skimming of surfaces. The book’s next two poems show deeper insights. ‘The Late Night Cafés of Despair‘ is a touching study of loneliness and rejection; and the title poem is the first of several evocative recollections of childhood as a time of being young enough to understand sorrow / and to understand nothing.

Kirby is well aware of the power of dreams to reveal anxieties and insecurities. In ‘Mea Maxima Culpa’ Reverend Mother … and her nuns sing to me in those high / pure voices … / … for they and I know / that everything, as usual, is all my fault. Memories of a Catholic upbringing surface again in ‘Applewood’ and involve the daily/ transubstantiation of my Marmite sandwiches / into the bread of heaven. A less orthodox kind of mystery occurs in ‘Limokon’ – a tightly condensed and rather spooky traveller’s tale.

There is however nothing of fantasy about Kirby’s treatment of the realities of war and there is devastating simplicity in her remark that outside the Imperial War Museum the Bar-B-Q stall does a brisk trade / in charred meat. A similar economy with producing shock occurs in her description of a 1928 photograph of a group of youngish men ten years back from Gallipoli and the Somme. We might believe those smiles – but only by

There is, of course, still more to be enjoyed in the forty or so pages of new work – for instance, some well-observed poems of place, many of them set in France. There are also further dream-like pieces (of which ‘The Down Train’ is an especially good example); some re-imaginings of the world of mid-twentieth century music-hall ; and one successful example of a genre that is often over-worked – the poem about writing poetry.

Each of Kirby’s previous three collections is represented by a thirty-or-so page selection. The poems that, for me, stand out most from Mr Irresistible are those which expose sinister possibilities behind ordinary occasions. ‘Rice Dreams’, for instance, begins with the open question Who can tell how things are? and proceeds from an innocent-seeming, even charming, scene of a couple in a restaurant to a dark fantasy that might lie beneath the surface. But is the fantasy in the mind of one of the participants or is it merely the imagination of the observer?  And who does the poet really have in mind when she asks

Unfortunately, Mr Panutka’s knowing starling’s eye does not show him what fate awaits the general when he steps outside in his new uniform…

which recalls the pessimistic closing lines of the earlier poem ‘Mea Maxima Culpa’. Grimness deepens still further when the title poem tells us the real identity of ‘Mr Irresistible’; and one is grateful for such interjections of humour as are offered by ‘R I with Sister Bridget, 1943’ in which the good sister

grapples with being asked to explain what

The selections from Kirby’s second collection Dirty Work seem to me to contain more sadness than darkness. There is a touching portrait of a widower who, as sole occupant of the house,

Towards the end of this poem, the widower is shopping for a sofa with his niece and a salesgirl leans towards him so that her blouse gapes, / breasts overflow the bra’s half-shells. And at this point Kirby’s frankness keeps going where others might hold back:

There is sadness again in the title poem, as lovers in a hotel room are uncomfortably aware of not being the first to come here. They have been here before us / those other ones … And later on, at the window Look you say/ even the glass is dirty. ‘Sardines’ captures the hot embarrassment and disgust of a young girl trapped during a house-party game in a linen cupboard / with a man she doesn’t know / who’s at least forty:

Kirby’s poems are never monochrome, however, and Dirty Work also surprises us with an unexpectedly tender view of the Madrid train bombings and a comical list-poem inspired by bizarre translations on the English tourist version of a Spanish menu: Scrambles of Tender Garlic, Wide Open /Olives, A Sort of Fish …

Kirby’s most recent previous collection is A Scent of Winter and this has already been thoughtfully reviewed on London Grip here. There is little need therefore for me to add anything except to say I am glad that the selections made for the present volume include the delicately rueful ‘Green Wine’ and ‘High Flyer’, the tender elegy ‘How it is’ and the exuberant show-piece ‘Stuck In Ougadougou With You’.

The Days After Always is a most enjoyable collection that runs to a generous 140 pages and lets us hear Angela Kirby’s distinctive voice in all its moods.

Escher at the Dulwich Picture Gallery The Hungry Writer