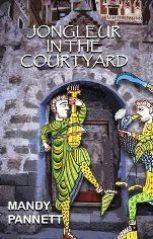 Mandy Pannett is a ‘jongleur’ and ‘voice-bearer’. Open any page of her fifth collection of poems and you will be seduced by the play of sounds, their assonance, alliteration, varieties of rhyme and slant rhyme and the intricate rhythms that lift them. Words echo other epochs and languages, as shown by these words chosen at random: ‘jongleur’ , ‘jouissance’, ‘bombleth’, ‘furbelow’, ‘umbra’, ‘disburdened’ which appear side by side with contemporary references, ‘photocopy’ and ‘text’.

It has been noted more than once that the writing of a poem is a generous act. Reading through this volume once again in order to write the review, it struck me that her generosity is a characteristic of Pannett as a poet. Nothing and nobody is excluded from these poems. Pannett’s themes are as open as her language and are conversations with history, folklore, myths, earlier poets, and the urban city streets, often within the same poem, while her sympathies with the powerless are implicit throughout.

‘Lace, far off’ opens with foragers… a’nuttin in lines of a Keatsian sensuality, but soon moves to the empty stems of elderberries, delicate – bare as lace, which leads us to an association with women

The poem returns momentarily to the joy of such hedgerow goodness in my house/as apples bubble in pans…, before ending with the stems, now on the compost heap:

This poem in many ways typifies Pannett’s approach, focussing on the immediate and physical, while still incorporating ideas, shifts of perspective and an awareness of ‘far off’.

At times Pannett invites the reader into her imaginative process. She tells us how the sound of a word awakens associations in her mind, as in her beautiful poem ‘A Marrying of Herbs’, which starts with a soup and becomes a meditation on the nature of death:

She continues to explore the word with its offshoots and its etymological roots: dispersal, dissolution and in the last stanza:

This journey could be a dangerous one – the poetry reader shudders at having anything explained – but Pannett effectively communicates the feel of her process, its physicality and emotional resonance, and so invites the reader to participate imaginatively in the making of the poem with her characteristic generosity.

Caroline Maldonado‘s publications include a co-translation of poems by Rocco Scotellaro from Italian, Your call keeps us awake, Smokestack Books (2013) and her pamphlet of poems, What they say in Avenale, Indigo Dreams Publishing (2014). Her reviews have appeared in Tears in the Fence and Modern Poetry in Translation.