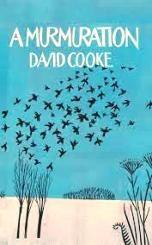 This collection is carefully structured – a single opening poem, followed by four separately titled sections – and the title poem provides a valuable insight into Cooke’s working method. Although ‘A Murmuration’ actually opens the fourth section it continues the quiet, watchful tone that has already built up in the preceding poems. Yes, it is descriptive of the massing of starlings at dusk and how the huge flock of birds can appear to move as one body, but it also acts as a metaphor for Cooke’s awareness of how his poems arrive.

The deliberate vagueness of that Something is effective: it conveys the unknown, the not-yet-recognised, the small individual specks (words, phrases) that come together to form themselves into something other – a complete poem. It also acknowledges that these are later-life poems, written by a poet looking back over decades, over the variety of connections that coexist within individual experience as well as within each poem.

David Cooke is a ‘returner’ – a poet who began writing young, and then published nothing (or very little) until recently. In 1977 he won a Gregory Award while still a student; in 1984 his pamphlet Brueghel’s Dancers was published. For whatever reason – and there can be many reasons – he published nothing to follow this; he has said that he stopped writing for twenty years. Then in 2011 Night Publishing brought out his retrospective collection In the Distance, while in 2012 Ward Wood published Work Horses. Now from Two Rivers comes the collection under review here – and in August this year Cooke’s A Slow Blues; New and Selected Poems appeared from The High Window Press. Yet, in spite of so much recent activity, A Murmuration shows no sign of hasty composition – in fact, quite the opposite. It has a pleasing unity, a quiet craft and a consistent gentleness in how it probes the past and how that past shapes the present. Cooke is aware of how he writes, and acknowledging the act of writing is an undercurrent throughout this collection. The years of not-writing were not fallow.

The opening poem, ‘At Woody’s Top’ – a poem outside the separate sections, as though to act as an introduction to all four – combines the visual with the creative, the view before him with its relationship to writing. The first stanza sees the Lincolnshire Wolds … as if geology/ had assumed a rhythm like verse. The second stanza ends on acceptance that the view … has the fixity/ and composure of a final draft. while the third notes the movement of gulls which … flicker above the copse/ like random thoughts/ that may or may not amount to something. There’s that same tentative awareness of arriving ideas (or poems) that will subsequently appear in ‘A Murmuration’.

There’s a strong appreciation of the small, significant details that add up to unique quality of each place in these poems. In ‘Faro’ – two hours’ flight from a northern spring – the orange trees have ripened slowly, revealing now/ a constellation of sweetness … and the storks on the bell-tower are … a perfect storm of beak/ and wings like loose-rigged sails. In ‘Prickly Pear’, the landscape around Mdina (Malta) condenses into the … shabby and uncherishable growth that fills in the gaps – everywhere in spiked mittens/ scrabbling over a drystone wall. It’s the exactness of spiked mittens that I like. Cooke and I share a taste for ‘Maltese Buses’ – … 1950s buses, decked out/ like wayside shrines.

The third section, ‘When Smokey Sings’, contains six poems about his adolescence and its rites of passage – more anecdotal in approach, but not so much as to exclude the reader. We can, I think, all remember attempts to fit in to the world of our aspirations, as in ‘When Smokey Sings’ –

There’s a wistfulness, a wry amusement at his younger self, that just lifts this stanza out of its leaning towards prose. The poem gains because he glances at things every teenager remembers: … the risks involved in kissing,/ how one thing might lead/ to another, but somehow never did. This was the glamour of growing up, when Above it all the mirror ball/ became your ruling planet. When did the mirror balls disappear, I wonder?

Cooke, who for some years was Head of Modern Languages at a comprehensive school, is also a sensitive translator; the handful of translated poems (from Jules Supervielle, Philippe Jaccottet, Stéphane Mallarmé, and Rilke), plus a poem about August Schleicher (the German linguist) interspersed with his own poems underline his care with syntax and vocabulary, and his attentiveness to aural qualities. They give depth to the collection, adding a more literary perspective but without forcing the overall tone away from his own measured voice. It’s a tone that at times can become almost uniform, something that is only apparent on reading these poems as a whole: this may be a symptom of having written (or revised) these poems in a relatively short period of time, conscious of the safety zone in which he works. A few poems have the feel of being one draft short of completion – ‘The Manor House at Alford’, say, or ‘The Sleeping Lady of Malta’ – poems where the idea isn’t fully realised even though the poem’s surface is complete.

But technical experiment for its own sake is a mistake and Cooke is wise to avoid it: he is a natural lyric poet who understands the roots of his own poetry. Two Rivers always present their books well and Sally Castle’s cover – starlings flocking over winter trees and a featureless landscape in muted blue and green – is the perfect complement to the poems. With its hints of autumn moving in to winter it comes at the right time.

D A Prince lives in Leicestershire and London. Her first full-length collection, Nearly the Happy Hour, was published by HappenStance Press in 2008, and a second collection Common Ground appeared in autumn 2014 and won the East Midlands Book Award 2015 (judged by Blake Morrison).