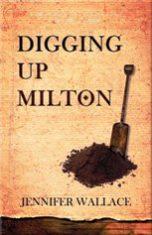 In November 1674 the poet John Milton was buried in London beneath the church of St Giles Cripplegate (which still stands, although now surrounded by the Barbican estate). Over a century later, in the summer of 1790, his coffin was rediscovered during building and restoration works. A pamphlet written by Philip Neve and published in August 1790 records that this event aroused so much local interest that one Elizabeth Grant, the parish gravedigger, was able to get way with charging visitors sixpence a time to see the poet’s remains inside the damaged coffin. Neve also reports that some onlookers did more than look: pieces of Milton’s hair, skin and bone began to circulate as valuable relics. Indeed a lively trade in macabre souvenirs evidently continued for month or two until Milton’s body was reburied in a site that is now unrecorded.

These are the historical facts upon which Jennifer Wallace has based her novel Digging Up Milton. Her narrator is the same Elizabeth Grant as the one mentioned in the Philip Neve pamphlet. She describes herself as being barely able to read but she has a natural aptitude for numbers which enables her to compute the opportunities that are afforded by her post of grave-digger for making money out of Milton’s corpse. As well as charging people to see the body she also goes into the relic business and has the idea of making attractive parcels out of slivers of bone tied up with a “ribbon” of hair.

Elizabeth (or Lizzie as she is mostly known) has an interesting story-teller’s style. She writes mostly in fairly modern sounding English, with only an occasional use of old-fashioned spelling or phraseology to remind us of the period setting. Her vocabulary is quite large and her syntax quite sophisticated for someone who admits to having had little education. But, for the most part, I did not care to trouble myself over any such contradictions or anachronisms; I was more than content to be carried along by the story and to accept that Lizzie’s authentic and innermost thoughts and impressions were being imparted to me in language tuned for my convenience.

Many of the novel’s other characters are drawn from the Neve pamphlet; and Wallace conjures up a persuasive picture of 18th century life in the narrow streets around St Giles. Lizzie meets with various setbacks in her marketing of reliques (as she terms them): business partnerships fail; she comes under disapproval in certain quarters; and matters are complicated by romantic difficulties. The narrative moves along at a good pace and skilfully accommodates the need to tell Lizzie’s back story while helping us to keep track of a quite large cast of characters belonging to an unfamiliar world. A rather charming plot-thread shows how the discovery of Milton’s body causes some people to become aware for the first time of the power of his poetry.

A popular obsession with buying and selling body parts may seem strange to our more squeamish twenty-first century sensibilities, but Wallace makes it convincing. (And perhaps the desire to touch something previously touched by the famous is still not so far below the surface: small personal items belonging to dead celebrities do sometimes go for large sums at auction. On the other hand, I once owned a car that had previously belonged to a famous jazz musician and I don’t recall this becoming a bargaining point when I subsequently traded in the vehicle.)

About half-way through the book, I did begin to wonder whether arguments over the disposal of post-mortem fragments would be enough to sustain the whole novel. I was therefore pleased to discover that Wallace has a couple more plot developments up her sleeve which broaden the scope of the story. One of these developments introduces an unexpected element of dramatic action (but one which is entirely appropriate, given both Milton’s political views and also the date at which the story is set). The other, in a pleasing re-unification of fact and fiction, arranges an encounter between Lizzie and the pamphleteer Philip Neve which sheds some (pleasantly shocking) light on my earlier comments about Lizzie’s narrative persona. These closing remarks may be thought somewhat oblique and enigmatic; but they are intentionally so – both in order to avoid acting as spoilers and also perhaps to entice some of my readers into getting hold of this entertaining book and enjoying it for themselves.