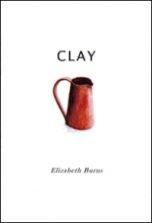 Like the precious Lucie Rie pots conjured up here in Burns’ small poems on the art and composition of pottery from clay, I am inclined to treat this pamphlet – Burns’ last published work in her lifetime – with great care. I previously reviewed Burns’ other Wayleave Press pamphlet A Scarlet Thread (2014) which was inspired by the works of Scottish artist Anne Redpath. Besides the fine poetry inside, it was a handsome pamphlet, but aesthetically Wayleave Press have made quite a leap forward with the more generously proportioned Clay. The poems in Clay can perhaps be considered meditations on the things artists have made out of clay, never once forgetting that we come from and return to clay. The poems may be modestly sized, but they are every bit as moving to me as Keats’ “Ode on a Grecian Urn”. Burns’ links the act of birth to that of making pots, as in ‘Potter-midwife’ where the finished pot is a clean warm baby:

The pamphlet is structured so that it begins with celebrations of artists and the triumphs they make out of clay, but towards the end of the collection, the poems take on a deeply ontological resonance, and all the happenings and vicissitudes of a life can be contained in the beautiful spiral of a glazed pot:

The ambition and scope of the poems, too, expands towards the end of the pamphlet so that the earth itself might almost be / a vast potter’s wheel and the artisans working in clay actually imbue something of their anima or life-force into what they make. One of my favourite poems here is Burns’ poem ‘Sacred’ after William Staite Murray. In this poem, the potter challenges the dogmatic idea that:

The potter does so by arguing that there is no better tribute to God than a pot in which the artist leaves his life-force, as a sacral vessel. Not all of the poems here are simply life-affirming, for instance ‘A life’ shows us again how something animate is made when the pot is made, but that once it’s made, it risks being broken:

Having established that the pot can be a receptacle of the spirit, Burns also shows how it can serve to emphasise a loss, such as the tactility of a cup held in the hands which encloses the hollow centre and makes the speaker feel as if I could somehow hold your loss. There is certainly an extra pathos added to these poems that mourn the deaths of others, considering how close Burns was to death when she wrote them. In ‘His ashes’ and ‘Her ashes’, the worldly remains of the potters are put back into the clay so that twice he passes through fire which is a startling image, not of loss but of renascence. The closing poem ‘Gift’ finds the speaker reunited with their favourite bowl, one you could hold all day with a rare and lovely / almost-primrose yellow glaze:

I am struck by these hyphens Burns used to sign off her poems, as if there is always more poetry to come, avoiding the finality of a full-stop. Like the bowl above, the overriding sense I have of these poems is as givers and bringers of light, and I believe, as Burns believed in the potters she gives tribute to here, that something of her spirit is contained in what she has created. The pamphlet as an object is beautifully crafted and the poems match this, making it a fitting valedictory statement from Burns, and something that contains elements of her life and the loss we now feel since her death.

.
Richie McCaffery  recently completed a Carnegie Trust funded PhD on the Scottish poets of World War Two, at the University of Glasgow. He now lives in Ostend, Belgium. He is the author of Spinning Plates (2012), the 2014 Callum Macdonald Memorial Pamphlet Award runner-up, Ballast Flint and the book-length collection Cairn from Nine Arches Press, 2014. Another pamphlet, provisionally entitled Arris, is forthcoming in 2017. He is also the editor of Finishing the Picture: The Collected Poems of Ian Abbot (Kennedy and Boyd, 2015)