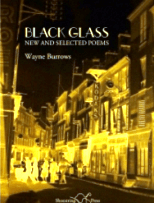 I love this book. It is a New & Selected and starts with the poems from Wayne Burrows’ first collection Marginalia (2001) and follows with tasters from his subsequent project based publications, The Protein Songs (2005), Emblems (2009) and The Apple Sequence (2011).

The poems from Marginalia are good representations of that book, including Burrows’ versions of Welsh poems ‘Llanddwyn’, ‘Stanzas for the harp’ ‘The Bubble’ and his englyns, presented together as ‘After Englynion’. The Englyns try to replicate in English the incredible lyricism of the original Welsh poems, rather than the mind-bending rules of construction, something Burrows himself says is an impossible task in English, although aspects of this short form are acknowledged. This lyricism is also present in the other work selected from Marginalia, mostly love poems.

The Apple Sequence is playful, exploring the history and ecology of orchards and apple varieties. One of my favourites in this section is the poem ‘Things That Are Not Apples’. The things of the poem are things that look like or have something in common with apples, are called apple(s), or have something appley about them. The list includes juice made from concentrate and in the end, even those seemingly perfect supermarket apples.

My other favourites in this book are all in the new part of the book. A sequence of poems about banks and money is called ‘Sonnets in the Aftermath and Anticipation of a Financial Meltdown’. There are 4 sonnets and all have biblical names i) Genesis, ii) The Commandments iii) A Prayer and iv) Revelation. Those names and even the choice of roman numerals for the numbering of each sonnet reflects Mammon’s pretence at permanence. This is something we still see today in the City of London’s older buildings with their granite walls and the much thinner marble facades of Canary Wharf – whose builders want us to believe no docks or dockers or anyone/thing else of blue collar significance was ever there (let alone only a few years ago). In fact the City itself as a business district is relatively new, housing having been bulldozed to make way for a purpose-built banking district in the 1800s.

I first read these poems on a bus on riding through that very space, looking up from time to time to its façades. Architecturally speaking it is a changing aspect – stone being replaced by the new cliché of glass towers – and, appropriately, we begin in ‘Genesis’ with the word

and perhaps it wants to be seen to exist. The ‘Prayer’ and ‘Revelation’ poems deal with the fact that, whilst we might despise big business and money, most of us also want it and fear its lack. ‘Revelation’ asks what will happen when the lights go out. If that means we can’t get money out of the cash point machine, the answer is – we (and those big stone buildings) will go on.

Burrows would appear from his poems to have a gentle, compassionate politics. His elegy to the animator, Oliver Postgate (famous for his work for children’s TV) shines with this. Called ‘On A Very Small Planet, Not Too Far Away’ the poem imagines a world run by Postgate, where

This, Burrows argues, is a world we might promise ourselves/ and begin to build – that is one where we can be human, fallible, content to lack any but the grandeur of small things.

There are many fine poems in this New & Selected and your favourites might be different from mine. Regardless of your favourites, this book really is a treasure house, Read it and love it.

Anna Robinson is a poet and historian. Her poetry collections The Finders of London (2010) and Into The Woods(2014) were both published by Enitharmon and she has a new pamphlet The Night Library (Stonewood Press). Anna has an M.A. in Public History from Ruskin College Oxford and is a member of the Raphael Samuel History Centre team and the Public History Seminar group. She teaches history and creative writing at the University of East London.