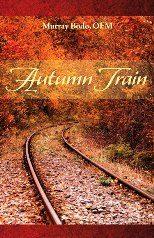 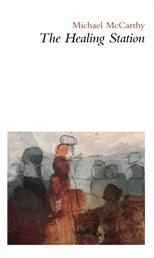 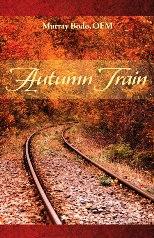 These two recent collections deal, in different ways, with the problems and failings associated with growing older.

Michael McCarthy’s The Healing Station arises from his residency at the Adelaide & Meath Hospital in Dublin where he worked mostly among patients affected by stroke or dementia. McCarthy’s keen ear for the sounds and rhythms of everyday speech enables him to record the experiences of people seeking to cope with frustrating symptoms. Even now, the figures are all lined up in his head // but the words get snagged on the way to his throat.

A recurring theme in Murray Bodo’s Autumn Train is the author’s awareness of his own increasing frailty: these thoughts nagging / nagging/ preventing sleep // these heartbeats / troubling/ scaring me awake. The book, however, is not at all narrow or self-absorbed: instead Bodo uses each limitation as a key to unlock some spiritual insight or else to free his mind to wander through fond memories of people and places.

McCarthy’s collection begins with ‘Taking it all in’, a poem which takes note of small details – as many of us do when first visiting a place which will be significant for us. In the hospital courtyard he observes a leathery snail which sniffs a left turn … like a tram in slow motion. This prefigures the way that stroke victims have to pay uncommon attention to small challenges:

These lines come from the poem ‘Willie Nelson’ which also quotes appropriately from a classic Country & Western song: Little things I should-a-said-n-done, I just never took the time. Such snatches of sixties popular songs frequently, provide tantalisingly accurate glimpses of an elusive past. In ‘Learning to Dance’ we overhear a therapy session which seeks to recover lost vocabulary:

Other poems give eye-witness accounts of the time when a stroke occurred. Sometimes these are in the first person:

Sometimes we hear the third-person version:

The pacing and placing of the little digressions are what McCarthy does particularly well. He catches the natural voice again when patients report on their progress. Sometimes there is rueful honesty:

Sometimes there is bland denial:

Patients’ tumbled recollections can sometimes throw up fragments of social history. An engineer remembers electricity coming to the west of Ireland during the 1950s – the women are all for it. Imagine being able to get up and boil the kettle without having to put down a fire first. And the limitations of war-time recipes are humorously remembered:

The book also touches on the relationship between healing and Christian faith; and the last few poems are paired with accounts of miraculous healings taken from Luke’s gospel. A particularly powerful one is triggered by the story of the Gerasene demoniac and the herd of pigs into which his evil spirits were cast. McCarthy draws a parallel with the financial madness of the ‘Celtic Tiger’ years when the whole country was possessed; and he imagines a ruined investor ruefully saying the last of my pigs / went over the cliff this morning.

One of the finest poems in the book is ‘Train Driver’, about a missionary driven to a nervous breakdown by his experiences of civil war in Africa. His life seems to be a chaotic railway journey which begins:

The whole poem is an especial tour de force in a book full of perceptive warmth and compassion. Occasionally the stories that McCarthy tells are in danger of sliding towards prose without quite becoming prose-poems; and perhaps we are allowed to eavesdrop on a few too many rather similar physiotherapy sessions. But these are very minor reservations about a poetry collection which helps the reader to understand a little more about the complexities of being human.

‘Thus’, the opening poem in Murray Bodo’s Autumn Train, offers three poetic outtakes – examples of fragmentary memories that can haunt us in our old age. Bodo’s recollections are: a glimpse of Pompeii’s desolation, with sand / blowing like dust in a ghost / town; Green Lake, unable to mix limestone / surface with bottom water / like a failed society; and London’s Clink prison offering the rack and brink of death each / day. Such isolated memories can stand out (sometimes quite inexplicably) from all the apparently similar experiences contained in our long past life; and they reveal what has truly mattered to us. They may also affect how we see and deal with what is in front of us in our diminishing future.

Bodo’s ‘Angle of View’ of present and future is nearly always tilted towards God; and this influences his sense of perspective:

Bodo is clearly very aware of God as a living presence Who is capable of suffering. Yet his relationship with God is not completely cut and dried. In ‘Waking in the dark’ he asks

And we find a similar slipperiness again in ‘night thoughts’

Small hours of the morning seem often to be times of insecurity:

The extracts already quoted give an indication of Bodo’s poetic technique. His tightly focussed – and sometimes enigmatic – thoughts are often expressed in syllabic verse and sometimes enhanced by skilful use of echoing repetitions. He occasionally makes use of quiet and unobtrusive rhymes.

Poetry itself is one of many themes that recur throughout the collection. There is, for instance, encouragement for anyone suffering writer’s block in Bodo’s mention of

And in ‘What the Mountain Hides’, Bodo also reveals that a poet might draw inspiration from clouds which almost swagger into sonnets. Affectionate tributes and elegies for several celebrated poets are scattered throughout the collection: Tomas Tranströmer, Denise Levertov and Seamus Heaney, among others.

Wild life, particularly birds, makes quite frequent appearances. In derelict parts of the city, sparrows make the barren walls sing / the empty houses occupied; and in winter, like musical notes on a stave,

Bodo’s fondness for small birds is, however, unsentimental enough for him also to be able to write with affection about youthful shooting trips with his father, hunting for quail that would drop to Mother’s table // into the polenta sauce.

It is also the natural world which inspires the parable of ‘War and the Centipede’ which is one of the shortest poems in the book and one which is unusually direct. It must either be quoted in full or not at all:

There are some interesting intersections between the experiences described in Autumn Train and those of the patients in The Healing Station. Bodo is aware both that mental powers fade with age and also that tricks can be played to keep mind thinking it’s young. For instance:

And when travelling through Italy in the autumn it matters

And when Bodo speaks of times of change when we choose to dance anew … a new deliberate dancing we may be reminded of one of the physiotherapy sessions where McCarthy describes stroke victims having to think again about movements that were once automatic.

In the end, Autumn Train is a deeply thoughtful poetic study of the mysterious intertwining of past, present and future. Bodo catches something of our ambiguous relationship with the past in a single concrete image over just a few skilful lines:

A few pages further on he seeks to integrate past and future. He reflects on the eventual fate of those already departed ones who have continued to live on in our memories:

and then goes on to suggest that the avoidance of this apparent double extinction takes place in God’s eternal memory. The poems in this collection are written from a viewpoint that is clearly Christian but which is neither dogmatic nor exclusive. The poems are full of understanding of human frailty even while they explore deep and difficult questions. On first reading they may present the reader with more challenges than those offered by McCarthy’s largely narrative-based pieces; but they amply repay a second (and subsequent) re-reading.