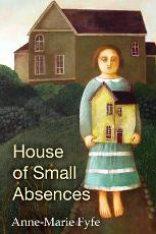 Norbert Hirschhorn admires the new collection from Anne-Marie Fyfe for its carefully shaped trajectory of echoing but elusive images.

The cover illustration of this collection is a prelude to the poetry. We see a starkly simple frame house surrounded by low, dark foliage. In front stands a girl holding a flattened doll’s house that looks like, but isn’t quite, a miniature of the main house. There’s a spooky quality to this girl. She reminds me of the Victorian photographs that served as memento mori. http://www.viralnova.com/post-mortem-victorian-photographs/.  She could be dead.

Anne-Marie Fyfe’s poems have that same elusive quality, on the border between what seems to be real and what is dream or hallucination, doubting their own narrative with preternatural calm. The opening poem to the sequence, ‘The Red Airplane’ illustrates the style maintained throughout. It begins with a matter-of-fact report of a small plane going down:

But then, was that mere illusion, a vision?

Perhaps the event was some distortion of reality but, in reality, the wreckage of one’s life still exists:

With so much depending the poem subverts William Carlos Williams’s ‘Red Wheelbarrow’: In place of his ‘no ideas but in things’, we find, rather, ‘no things but in the surreal.’

Note that the vision was from an oratory window. In old Irish churches (Fyfe hails from the Glens of Antrim) these were small, providing narrowed vision – the theme of narrow windows runs throughout the book.

What was once ‘real’ is now the stuff of artifact, like Joseph Cornell’s box- assemblages. In ‘Neuchatêl’, Fyfe presents artifacts with words: for instance, in wonderfully detailed description of long-gone aunts: Wealthy, aristocratic, full of adventure and daring (they drove self-starting cars), mouthing Stuyvesant cigarette smoke rings, holding lapdogs, sitting at triple-mirrored dressing tables, sending over-sized birthday cards with signatures in emerald green ink/and crisply folded bank-notes inside. Did they really exist, or are they the stuff of fairy tales recollected in tranquility? Their ghosts, however, are with us still:

Cornell’s boxes are alluded to in a madhouse where shuffling delusional patients are dressed in Florentine masks,/ eye-patches, bee-keeper veils, in ‘Honey and Wild Locusts’ (inverting Matthew 3:4: John the Baptist’s food was locusts and wild honey):

The title poem, ‘House of Small Absences’ is also set in an abandoned madhouse (barred windows), whose last inmate haunts the ruin:

The patient – another ghost – comes, like the aunts, from a far-gone era: she packs her bag nightly with an old brand of cigarettes, Kensitas; she sings Night and Day (Cole Porter, 1932). Death and disfiguration stalk the grounds: a crow, a last empty cab passing, Every watch/in Sadler’s store window-display’s gone awry.

Though Fyfe relies too heavily on epigraphs (appearing in fifteen out of forty-nine poems) that add little but visual clutter, she can use the sparest of imagery to evoke a troubling world. And example, an old-age home in Germany, in or near the Ravensbrück women’s concentration camp:

Death is in the air, mixed together in real time and in memories (‘The past is a foreign country’ – L.P. Hartley):

We think we hold commerce with the dead through artifacts and commemoration, but in fact, it is we who have abandoned them, their loss more than ours. They are old news [‘What the Dead Don’t Know’]:

The dead reside in their own nether world a thousand storeys deep, in a subterranean shadow land, a simulacrum of the world above but in strange muted light – a lifeless arctic midnight sun. [‘Lower Manhattan’, a fine pun].

Yet even the streets of the living are no more real [‘Street Scene’], like Hollywood false fronts even as you walk past. Don’t ask questions, keep moving:

We will join these dead someday, mute and forgotten. It can come suddenly, a terrible accident [‘From the Cockpit Window’], a plane crash; perhaps in the same two-seater that appeared in the first poem. And then where are we?

Life is ever so contingent. In ‘The Window Washers’ twenty-four lines are given over to loving detail of the expert job performed high up a NYC skyscraper. Then the last stanza:

What I like most about this collection is its trajectory, the movement along the pages from one poem to the next; the way poems and lines echo one another. To appreciate this requires great attention from the reader and multiple readings, which ‘House of Small Absences’ both deserves and rewards.

. . Norbert Hirschhorn is a physician specializing in international public health, commended in 1993 by President Bill Clinton as an “American Health Hero.” He now lives in London and Beirut. His poems have been published in over three dozen journals, and four full collections: A Cracked River, Slow Dancer Press, London (1999); Mourning in the Presence of a Corpse (2008), and Monastery of the Moon, Dar al-Jadeed, Beirut (2012); To Sing Away the Darkest Days, Holland Park Press, London (2013). His work has won a number of prizes in the US and UK. See his website,www.bertzpoet.com