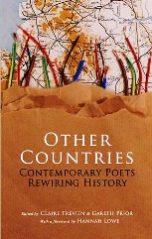 Anna Robinson looks at a recent anthology of poems about historical events and considers what we can learn from poetry about ways of exploring the past.

Other Countries is an anthology which sets out to present poems that discuss history and historic events or people in a questioning and vibrant way. It came out of a discussion between editors Claire Trevien and Gareth Prior that took place on a blog page that Trevien had been invited to post in by The Poetry School.

The initial question had been around poetry, tourism and cultural appropriation. For me, it is easy to see how history could have spun out of this discussion. The key concern of my own writing and research revolves around the social, cultural and political history of working class people and the ways in which that history – and the arts that sometimes present those histories – have been appropriated by others. Professional historians and writers from other backgrounds often shamelessly declare a bizarre and unconvincing level of “ownership” over those subjects and go on to be considered academic “experts” and make a nice living off our ancestors backs.

Taking back power, our stories and ways of telling those stories on behalf of whichever oppressed group you were from was the main aim of the various groups of radical historians globally from the late 60s onwards. In the UK those historians were mostly gathered around the History Workshop movement or various Labour or community history groups in small towns all over the country.

Those historians had their poets too – mainly poets that were published by local community publishers such as Kentish Town’s Hearing Eye and East London’s Basement Writers. As Basement Writer, Sally Flood wrote The aims of the people / from far distant shores, / walk in the footsteps/ that used to be yours. The job of the poet was to humanise and enliven the data that historians collected. Radical historian Raphael Samuel believed that poets and theatre writers were as capable of producing viable history writing as historians. He also argued that no-one is either purely a maker or purely a consumer of histories. Therefore any poet handling historical or heritage materials with integrity could write a valid history.

What makes this anthology different is that previous attempts at “rewiring history” in poetry have tended to have a class, ethnic or gendered agenda, whereas the histories discussed in the poems here don’t all do that. Some of the poems approach aspects of “big” history: Sarajevo, the English Civil War, the French Revolution. They “rewire” by presenting, in various ways, the frighteningly chaotic nature of war and its often seemingly random violence. ‘Sarajevo’ by Diana Norma Szokolyai, presents us with an almost alienated tone, as if it were a translation; and this hits the reader – giving them a small flavour of that experience. Lay your body down in rags/ Let your streets drink vinegar! ‘After Naseby’, by Ross Cogan, does something similar in considering the slaughter of around 100 women accompanying the defeated Royalists in the English Civil War. The world / clatters away to iron as I pick / a stumbling passage through the luscious dead. Here the text is more straightforward, but the tone is a voice in shock; and that broken lineation contributes to give us a flavour of what that might have been to experience.

There are some poems that explore the more everyday concerns of “social” history or even contextualised biography such as Richie McCaffery’s ‘Elizabeth Logan (1837-1839)’ where McCaffery considers the slate headstone of a young child carved by her father.

Italian radical historian, Carlo Ginzburg, compared history to law practice in his great work of historiography The Judge and The Historian. Histories are selective but they also have to be evidenced. Two poems that play with that observation are Emily Hasler’s ‘Notes: A Monumental Brass’ and Linn Hansen’s ‘It is hard to count all the events of history but it is easy to begin’. Emily Hasler’s poem consists of footnotes to a poem, or essay perhaps, that we are not presented with. Note 1 is simply a book reference, and the first few notes are intriguing facts that build up a picture of women in Medieval England. There is a footnote “voice” at play here, a series of asides. Hidden within them, in full sight, are a couple of exchanges between a lesbian couple, commemorated by the ‘Monumental Brass’. Their presence is an “exception” the foot notes tell us. Linn Hansen’s poem asks the eternal first year undergraduate question “What is history?” and responds in various ways – some whimsical and others more thought provoking.

This book could have been vast, I think, but as a little taster to a kind of approach to historic material you could do worse than start here.

.
Anna Robinson is a poet and historian. Her poetry collections The Finders of London (2010) and Into The Woods (2014) were both published by Enitharmon and she has a new pamphlet The Night Library (Stonewood Press). Anna has an M.A. in Public History from Ruskin College Oxford and is a member of the Raphael Samuel History Centre team and the Public History Seminar group. She teaches history and creative writing at the University of East London.