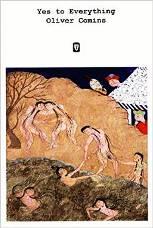 Josh Ekroy praises Oliver Comins’ poetry for its use of tactfully included detail as a way of conveying emotion held in check.