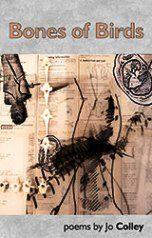 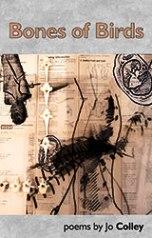 As regular readers of London Grip may have noticed, I not only review poetry collections but have also written articles about aviation. Hence the chance to review a book which features both poetry and aeroplanes was too good to miss. I was drawn to Jo Colley’s new collection Bones of Birds by its back-cover promise of poems on ‘Soviet women fighter pilots and pioneering aviatrix Amelia Earhart’. It turns out that this promise is not only fulfilled but surpassed, thanks to the inclusion of poems on several other heroines of the sky.

But before we encounter any conventional aeronautics, Colley gives us a group of poems about women who ’fly’ in the sense that they find imaginative ways of escaping from various kinds of drudgery and conformity. In ‘old ladies have the bones of birds’ we meet little witches who can at last enter their designated realm – that is to say the distant sky they gazed at / from flat on their backs long ago, when they were children. Once they jettison pies, irons, plans they can take-off with the birch between /their legs. After this suitably exuberant beginning we proceed to other sorts of getaway. An overworked seamstress, who has zigzagged twice around the world, takes refuge in learning music whose notes hovered for a second then were gone. An heiress finds her way to independence with the help of a very unusual imaginary friend; and Joyce still standing up to her 80 odd years keeps her escape route in a little box of pills / She’ll know when the time has come / to swallow, swallow, swallow. An anonymous 1960s air hostess grounded at 30, / with a new life in the Cotswolds concludes the opening section and leads us to poems featuring named and famous women flyers of the 1930s and 40s.

The most celebrated women aviators Amy Johnson and Amelia Earhart get only one poem each, mainly dealing poignantly with artefacts remaining after their deaths in flying accidents. However, the slightly less well-known New Zealand long distance pilot Jean Batten is the subject of an eight-poem sequence which captures the loneliness and vulnerability of the solo pilot: You’re caught for hours in a grey bubble / somewhere between sea and sky, unsure/  which way is up.  An ever-present fear is that the plane’s engine will stop like a tired child giving in to sleep. But the poems deal as much with Batten’s relationship with her parents as with her relationship with aeroplanes. (There might also have been some poetic mileage to be had from a laconic quotation in the Jean Batten entry in NZ History on-line: “Raising money by taking advantage of her relationships with men was a theme that continued throughout her flying career.” Colley may have missed a trick here – or perhaps she was simply showing some sensitivity and tact.) The Jean Batten sequence has an oddly shifting relationship with its subject, using third, second and first person voices to speak of, to and for its central character.

The most energetic flying episodes in the book involve Russian women pilots of WW2. We learn about being hit by gun-fire: Going down, / skin stretched hard over bone, / my life as a cartoon flashing by; and after the crash I was drunk on the vapour from the fuel.   In ‘Lilya Looks Back’ there is an echo of the book’s first poem as a Russian fighter ace remembers herself as a little girl looking up at the sky and then compares her flying tactics to the magical skills of the witch Baba Yaga. The same poem plays with the uncertainty surrounding Lilya’s death in combat, holding out a possibility that she was taken prisoner and survived the war in Germany.

The section entitled ‘Standing By’ shifts the focus away from women taking to the air and deals with a man falling from the sky. We learn first of all about the poet’s father escaping by parachute from a burning bomber, an experience which changed his life:

That night, my father turned into a tree
wrapped himself in bark thick enough
to prepare him for all he had to do
to survive dark days in cold camps

In subsequent poems, which describe episodes from the poet’s own growing-up years, her father flits in and out, rather like a tormented ghost who was no longer fitted for the life that waited and who is seen by others as the man who only leaves his box / when summer comes. In this section, Colley is writing about subjects which are (literally) much closer to home and the poems feel correspondingly deeper and more tender than those earlier in the book.

The book’s final section ‘Slip stream’ stays in this more personal territory and is marked by a switch from air to water. The strong opening poem ‘View from a Bridge’ begins

The skiff splits the river’s skin
makes it bleed into geometry,
leaving patterned ripples
that fade like frowns

and continues equally strikingly to become a beautiful metaphor for departure and loss. This section acknowledges the poet’s move from being a child to being a parent and some of the poems describe meetings with a grown-up daughter in London. Water continues to be present:

Through the rain pearled window of the Starbucks
outside Embankment Tube, I see you come
long legs high stepping through your day to mine.

Everything stops to look at you – taxis,
tourists, pigeons, raindrops – all
swirl into a rapturous blur…

Throughout the remaining, well-crafted and engaging poems, Colley displays an intriguingly ambiguous attitude towards water. At one time The rain seems drier now. My raincoat / hangs forlorn, wellingtons unworn and later on she confesses I have never had / a long term relationship with an umbrella. Yet elsewhere she tells us my body chooses baptism. In ‘Night Vision’ – a poem reminiscent (in a good way) of Adrienne Rich’s ‘Diving into the Wreck’ – she is prepared to take the plunge: everything / submerged except your stubborn head / up to your neck in it. By the end of the section she has even begun to identify with mermaids. With a neat sense of symmetry, one of the book’s final poems concerns Peg Prowler, a river witch, completing a trio with the airborne witches at the beginning of the collection and Baba Yaga with her earthbound house on chickens’ legs.

‘Slip stream’ seem to me to be the best section in what is overall a very good book; and it offered me many more quote-worthy extracts than I have already given. I might have come to this collection mainly looking forward to its aviation-related content; but I can now say that – thanks to the imagery and language in these later poems – my enjoyment has far exceeded my initial expectations.

Who Moved the Stone? The Passover Files