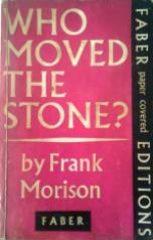 In the weeks leading up to Easter, Michael Bartholomew-Biggs reflects on the surprising longevity of Frank Morison’s 1930 book which examines events surrounding the first Good Friday. 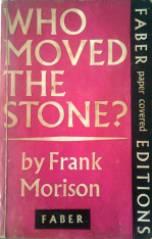 Frank Morison’s Who Moved the Stone? was first published by Faber & Faber in 1930 and the book has remained almost continuously in print ever since. My own battered copy (see the heading picture) is a Faber paperback printed in 1971; but at some point thereafter Faber & Faber seem to have bowed out and the most recent edition I can find on the internet is one published in 2006 by Authentic Media.

I recently picked up Who Moved the Stone? again for the first time in about forty years and I was surprised to find that, while the book clearly shows its age, it remains quite a page-turner. Although I certainly did not begin to re-read the book with a view to writing about it, I became sufficiently intrigued that I wanted to try and understand its longevity.

Who Moved the Stone? begins by explaining that it is not the book its author originally intended to write. This makes for a rather tantalising opening, and its inclusion as a kind of ‘come-on’ to bookshop browsers may owe something to the fact that the author – whose real name was Albert Henry Ross – worked in the advertising industry and was presumably well acquainted with ways of gaining a reader’s attention.

Morison had originally planned to write a study of the final days in the life of Jesus of Nazareth, leading up to the crucifixion. Under the influence of much Bible scholarship of the late 19th century, Morison was sceptical about the resurrection story; but, unlike many so-called Higher Critics, he did believe that the gospel accounts of the arrest, trial and execution of Jesus were historically accurate. Hence, by close reading of the four gospels and other contemporary secular records he hoped to discover the real reasons and motives behind the condemnation of a man that he, Morison, considered to be a great teacher.

This then was the aim of the book that Morison ultimately did not write. Although he conceived its outline while still a comparatively young man, he did not have the opportunity to do the necessary research until he was well into his forties. Then, as he sought to harmonise the gospel narratives and to try to imagine what might have happened in between the recorded events, he was surprised to find that all the accounts of the resurrection had the same ring of historical authenticity as the descriptions of the arrest and legal proceedings. In other words, the part of the story which he had taken to be some sort of later, wish-fulfilling fabrication, could not easily be distinguished in tone or consistency from the parts that he regarded as substantially factual.

The purpose of this short essay is not to critique Morison’s theological conclusions but to consider why the book which expounds them should have been so widely read for over eighty years. Part of the reason may be that the book is, in fact, not really a theological text.   It treats the gospel narratives like the evidence in an ordinary court case and seeks to establish ‘beyond reasonable doubt’ what really happened. Morison does this by subjecting the Biblical accounts to a process of close examination which also involves the calling (and sometimes the discrediting) of other expert witnesses. As a result, the book reads rather like a detective story – but one in which the sense of a mystery being unravelled is present all the way through rather than being saved up for the last couple of denouement chapters.  Here is a short paragraph from early in the book in which we might detect something of the cosy flavour of the concluding part of a Sherlock Holmes story: Directly we set this question in the forefront of our enquiry, certain things emerge which throw new and unexpected light on the problem. It will help us to an understanding of what these significant things are if we consider first the very singular character of the trial itself. For not only did it take place at an unprecedented hour for such proceedings, but it was marked throughout by peculiarities of a special kind. Consider in the first instance the vital element of time.  This slow preamble is surely a textbook example of how to build up a reader’s curiosity about impending revelations. Elsewhere, Morison’s raising of expectations is of a more long-range nature: It will require very much more than this chapter to answer these questions, to which indeed the whole book is a very partial and inadequate reply. (Modest self-deprecation was more common in 1930 than nowadays.)

Who Moved the Stone? appeared more or less at the start of the ‘golden age’ of the English whodunit. The narrative style is very much of the period and it sometimes resembles the meticulous prose used by writers such as Freeman Wills Crofts or R. Austin Freeman whose plots could hinge on detailed study of train timetables or the precise actions of certain poisons. We are told for instance: Thus there were two routes open to the arrest party. One was to follow the Kedron Valley to the foot of these steps [to the Upper City] and thence to the High Priest’s house. The other was to take the main Bethany road into the new town and thence by the Tyropœan Valley to the Priestly quarter.

To offset such stolid presentations of essential fact, the book’s argument is (understandably) made with all the persuasive earnestness of inter-war advertising copy. Even up to the 1950s, advertisements for expensive items such as cars remained very wordy and presented themselves as carefully measured appeals to the reader’s better judgment. Here are two typical examples of Morison’s rhetoric: No one can read the records of this extraordinary episode without realising …; and again Now it seems to me we shall make a very grievous mistake if we assume … Thus, whenever Morison makes a conjecture (which he wants us to accept) he is careful to introduce it in a similarly qualified and circumlocutory way: We shall probably not be very far wrong if on this particular night we imagine … Those like myself who grew up during the 1950s and 60s have probably been conditioned to find this rhetorical style quite reassuring and trustworthy.

Somewhat less pleasing to present-day ears is Morison’s casually patronising and stereotyping language about the women in the case. Although he acknowledges their great importance in the narrative, he is guilty of (probably unthinking) generalisations such as highly-strung women are generally light sleepers or the frailest of women are drawn irresistibly to ministrations to the dying….

And yet, for all its dated attitudes and style, I have to say again that my re-reading of Who Moved the Stone? has shown it to be still quite a page-turner. It has all the marks of a good mystery novel: theories are advanced – for instance, to explain why the arrest of Jesus took place so late at night; alibis are investigated – e.g., to resolve apparent discrepancies about who was present at various incidents; and motives are analysed – considering, for example, why Judas needed to act as an informer when the authorities had already had ample opportunity to take Jesus into custody. Without venturing to comment on Morison’s conclusions (since he does a pretty good job of speaking for himself) I do want to say that his long-surviving book does very well to convey the down-to-earth and human aspects of reported events which, in the last 2000 years, have had such spiritual (and – let’s be honest – political) consequences. For some, the Easter narrative is now something too sacred to be handled or questioned; for others it is a fantasy too absurd to warrant serious examination. Morison does something very worthwhile in rescuing the story from both these extremes of detachment.

In the popular music world, Morison would probably be regarded as a ‘one-hit wonder’. He wrote several other books on non-religious subjects but none of them enjoyed anything like the success of Who Moved the Stone? (Authentic Media, his most recent print publishers, may not thank me for mentioning it, but the book is now freely available on line at http://www.gospeltruth.net/whomovedthestone.htm .)