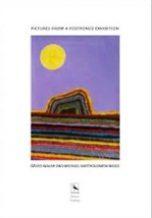 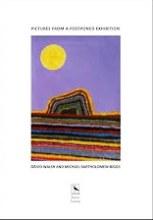 An artist and a poet have collaborated to produce this elegant pamphlet – sixteen paintings inspiring twenty-nine lyrical poems. Each could be considered an ekphrasis of the other, defining and describing both essence and form. As it happened, Walsh, an Australian ex-patriate now based in UK, had exhibited his work at the Wellcome Galleries in 2002/3 — aboriginal figures against vast landscapes — and had hoped to show an expanded collection. It didn’t come off until Bartholomew-Biggs saw the works and began to write poems in response. A dozen years later, the project has come to completion with this publication, the exhibition no longer postponed.

The poems come two to a page, placed between the paintings. The majority speak to the paintings in dream-like narrative (“Voices from the Walls”); a few are more a curator’s guide (“Notes for a Catalogue”). They can be read as a story in impressionistic stanzas of Australia as a prelapsarian Eden – first inhabited by exotic flora and fauna; then come upon by Aboriginal people (estimated some 50,000 years ago, coming out of Africa); and finally the destruction of a way of life by European colonists.

The pamphlet’s introduction sets the scene for the paintings, which replace the green, lush and often dark European backgrounds…by the hot, fierce, dusty red terrain of… Australia. The paintings are rich in red, black and ochre pigments, laid in horizontal planes reminding one of Rothko. Bare trees populate many of the works: nearly limbless, upright, sometimes suggesting spears, sometimes crucifixes. In several paintings a few human figures sit or stand in this desolation; they resemble Giacometti’s stick-figures. We see also a merciless yellow-orange sun, turbulent blue for a sky; some glyphs and rock paintings.

As “Notes for a Catalogue” informs us,

In an arid landscape, slender figures
curved as question marks
enact bewilderment at being f
ound beneath acrylic sky…

Painted figures cannot speak
but they can mime and want
stiff gestures recognized.

It is here I am reminded by the Aboriginal ‘song lines’, also called ‘dreaming tracks’, as described by explorer-journalist Bruce Chatwin in his book Songlines. To orient themselves over and through vast tracts of wilderness, Aboriginals created songs enabling an indigene to navigate long distances by repeating the appropriate sequence of words describing landmarks, waterholes, and other natural phenomena. The paths of the song lines are recorded in traditional songs, stories, dance, and painting. Some depict paths traced along hundreds of kilometres.

The paintings and the poems, like the song lines, are not simply representational, but evoke the landscape and beings within.

Dreams came snaking in
to nudge us, urge new restlessness
on sprawled acceptance of all offerings…

We are first made to recognize an Edenic state: isolated, sinless, free of conflict. But this prelapsarian state is sterile, uncreative. It is the “east of Eden” that provides turmoil, but also generative power:

If there were ever harvests
for which no back had ached
from turning stubborn clay;

if juice from perfect fruit
once filled our mouths beneath
the laughter of cool leaves;

then this as well was true:
no flaw went unobserved.
No conflict was concealed

where all was self-contained
and bound to its own kind.
So distances were kept

and blossoms could not brush
nor windfalls blend their flavours
nor mixed seeds fall together.

(The unsmitten rock recalls Moses’s rebellious sin to strike the rock for water, for which he was punished by not being allowed to reach the Promised Land. )

There were at first no words for artefacts –
no jug, no wine, no bread. With nothing lacking,
nothing needed manufacture.

Then slowly, the first humans created bushy hiding places that became shelters; clusters of vegetation turned into clothing (Adam and Eve stayed naked until they tried to hide their shame behind fig leaves); followed by squatting rooms for privacy/and secrecy. We learned to camouflage…

Later, One stone must have been the first/ whose stopped short flight did more than stun,/ one jagged branch the prototype/ of all the spikes that pushed through flesh… and we are now with Cain and Abel and the first murder.

Afterwards came language, drawn from the sounds of the natural world: Dreams came snaking in/ to nudge us… and wind taught us language with sibilant words like twist and mix.

Even as humans discovered transience, impermanence and death, they also learned the seasons and cycles of life:

Colouring in leaves and blossoms
moved more slowly than the flick-flack blackness
of their shadows. But they moved
at their own pace: each glowing yellow,
ripened pink or tender green…
…                     The fragrances
ignored our wishes too and left us
just enough to recognize how much
we’d missed them when they came again.

Even solid rock …gave its consent/ to being furred with moss and lichen-stubbled/yellow-grey with age” and to be eroded by water.  Along with consciousness came memory, entering the song lines, If signs emerged from rock,/ like memories returning unexpected,/ could there be a way// to make a rock retain/ a likeness ofwhatever we might like/ to see when out of sight?

When conveying a likeness, art represents that which is “out of sight,” art, and then totem-like, becomes the real: [S]ucked-in air imitates bird song; berry-juice is sprayed for colouring/ an absent creature’s presence.

The first humans began to deliberate on origins – as the Catholic catechism still asks, “Who made me?” The origin myth is re-enacted in dream, but dreams can be dangerous, being another reality in which we could be trapped.

A sleep-trapped world could twist itself
to other worlds we’d never want to meet;
to worlds we’d run from if we met them…

This fear gave rise to the shamans who could interpret and detoxify the dreams. Look more closely: that is not a damaged bough. A hanging body mingles with the branch and take whatever shape the tree demands.

But even this still peaceable post-Eden is poisoned when strangers (such as white Europeans) arrive:

These strangers let their faces hide behind
their voices, telling lilting tales of testing
limits of permission: pressing fallen
fruit and simple water into wine;
crushed grain on heated stones to conjure bread.

They take the best lands for themselves; push the Aboriginals into the desolate far distant hills, where they could now do nothing but mourn:

Who could know the trees would die
when we abandoned them?
It must have been the shriveling
of unaccepted fruit
that concentrated juice to toxins….

…and drove us into utter sun
where earth turned granular and burned….

The first people had to find a new way, however stunted and sere:

Desperately dwarfed,
we redefined ourselves
against a vast indifference.
Still we ventured even further:
Turned our backs
on purple succulence of blossoms.

These beautiful poems and paintings themselves enact the gorgeous human tragedy of the species we are.

Norbert Hirschhorn is a physician specializing in international public health, commended in 1993 by President Bill Clinton as an “American Health Hero.” He now lives in London and Beirut. His poems have been published in over three dozen journals, and four full collections: A Cracked River, Slow Dancer Press, London (1999); Mourning in the Presence of a Corpse (2008), and Monastery of the Moon, Dar al-Jadeed, Beirut (2012); To Sing Away the Darkest Days, Holland Park Press, London (2013). His work has won a number of prizes in the US and UK. See his website, www.bertzpoet.com