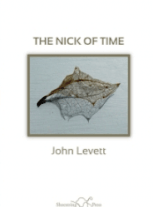 Muscular rhyming, syntactical gymnastics and remarkable clarity – John Forth finds all these in John Levett’s poetry. 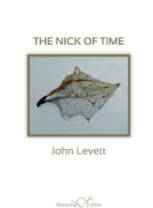 Larkin had just left us, Heaney was about to do his best work, the Martians were packing to leave and Hughes was still King when the inter-stellar-covered Skedaddle, John Levett’s second book, landed among us. Reinforced by the heavy paper of an early Peterloo, its muscular rhyming poems looked out-of-step and stitched-in by power tool. A little earlier, in 1985, when we were nervous about air-strikes and Reagan’s Star Wars, this had appeared in LRB:

Iambics, there from the start of each twelve-line stanza, break the surface only to slip into something comfortable, at first aimlessly and then to enact powerlessness. In the penultimate line the pause might signal inverted feet unless you’re American and stress the second syllable of ice-cream. Good, I thought, and still think, but how hard it must be to keep this kind of thing up.

Yet keep it up he did, though after three Peterloo books in ten years came a slowing-down, and in his fourth collection in 2009 he took time off to write a handful of freer forms which temper the brew, and that’s it – until now. Yet for all the glittering prizes and polished articles, he can be hard work sometimes when he’s working too hard. Many of the poems in his latest book use big stanza forms, are structured like mobiles, clause after clause dangling from a slender rod. For a reading public, some of whom have found his work ‘exhausting’ or too heavy to digest in quantities, one answer is to write less; another is to be read slowly. Levett can work well on both counts.

These days he exploits a range of simple glories. ‘Water Boatman’ (A connoisseur of cooling surface tension) and the small souls speaking from inside ‘Paperweight’ (So this is what it’s like to be / A toy in someone else’s life) are balanced by the gravity of ‘Beatrice Cenci’, in which the speaker bubble-wraps a painting to bring it home: And if I could I’d bring him back as well /To play the holy fool again, to sing. The way the artwork is made to blend with memories of its owner is, well, breath-taking. Speaking of which, a backpacker climbing ‘The Tower’ of St.Peter & St.Paul in Cromer is another example of a relic upstaged by a more contemporary and, this time, tattooed beauty. Its twisting sentences (there are two in 30 lines) send you scurrying to track down their subject, which turns out to be ‘us’, our journey up:

Anomic, feeble, still enticed
By notions that, through God and Christ,
Salvation is, after the Fall,
Both circular and vertical.

A kind of cleverness I can’t resist still leaves me wondering whether the backpacker struggles to be more than another artwork. Which may be what happens to ‘Doll’, a destitute woman fished from the dock with her trolley and a dead cell phone /Flipped ready for her next soliloquy, or to the man in ‘Small Change’ – a grim play-on-words involving the contents of a man’s pockets after he goes under a tube-train. Such examples of what may seem lost or misplaced empathy are few and may be down to taste (when they happen, you blame yourself); but sometimes the art gets lost among the colours. The title poem itself, another pun, confounds the doubter by being not merely clever, but the subject is a self-harming serial suicide caught in recurring desperation:

And as the two green men barge in
She feels their eyes rest on her skin
And knows this time she’s cut it bloody fine.

But it’s ‘Beatrice Cenci’ that signals genuine loss in the more personal poems that follow – brilliant constructions using the 10 and 11-line stanza-forms we associate with Keats’s odes: ‘Formica’, ‘Ship in a Bottle’, ‘Imperial Leather’ and ‘The Deep End’, this last matching the intensity of the others when an absent father takes his daughters swimming:

So, in ‘The Nick of Time’, the names have been changed, possibly to protect the innocent. One thinks of metaphysicals, of early rhyming Lowell – or of his later ‘Waking Early Sunday Morning’ (even if Levett avoids a strict Marvellian stanza) – because of the controlled, compressed feeling in keeping step. ‘Witness Appeal’ is one of several laying bare the awful in the contemporary, when a driver draws close to an accident-site, as someone somewhere waited, unconsoled,/While dusk came down unnoticed, calls were missed. And if we wanted clues to what Marvell’s Mower might get up to if he were with us, we might read ‘Double Yellow’, in which green-belt fields are taken over by a multi-storey car-park. Betjeman’s public building, or some of them at least, had ways of surviving. It’s much less clear-cut in the resigned sadness of vanishing countrysides:

£1 an hour. We take the lift
and ping up past a dozen floors
then glimpse through automatic doors
the moon begin its cloudy shift,
and hear, as neon makes us blink,
blackbirds exorbitantly sing
deep in a checkout’s chink-chink-chink
of earth and its slow vanishing.

To end on a celebration, I’ve already mentioned the syntactical gymnastics necessary for staying airborne in long stanzas with fixed rhyme schemes – what I’m tempted to call Levett-ation – and it’s clear that the recipe also demands robust mythical and historical support-systems and a big vocabulary (both used unobtrusively). What’s more remarkable, in light of all this, is the clarity. He’s not afraid to drop an occasionally vulnerable ‘I’ into impersonal surrounds:

We can only imagine what a man thinks
When he’s just lost his head on the guillotine
From the twenty or so of Lavoisier’s blinks
And the thoughts, if any, he had in between;

A chance, as I feel the edge of her tongue
Sharp and ill-tempered go whispering by,
To blink from the basket and, bloodily swung,
Signal at last that we see eye to eye.

‘A Difference of Opinion’, sharp and brief (this is all of it), proves again that the best jokes are serious. It doesn’t have to be personal to be a good joke, and nor does he need to conjure an execution to be properly universal, but it’s here as evidence of the kinds of wit at his disposal: meticulous, resourceful, quietly self-effacing and right. Like a good librarian, some might say.

John Forth was born in Bethnal Green and recently retired from teaching English after thirty-odd years. He has published four poetry collections (Malcontents in 1994, A Ladder & Some Glasses in 1998 and The Demon’s Phenomenal Filmshow in 2013 when a collection of early work, Spirits of Another Sort, also appeared). A New & Selected is due next year from Rockingham. He has reviewed new poetry for London Magazine and his poems have appeared in a number of journals.