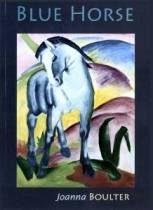 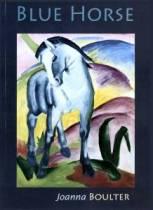 It seems appropriate to be reviewing Blue Horse as December brings 2014 to a close. Some (but not all) poems within it have that feeling of looking back without nostalgia and putting a life in a context. ‘In the Folds of the Map’ tells us how Whole villages lost in these folds / begin to doubt their own existence. / The school is closed, the bus route is diverted / and no one is surprised / they drive themselves to towns to become real. The poem ends:

It pleases me to think
that Frobisher after three hundred years
could navigate at last with Amundsen
the Northwest Passage that he’d dreamed of finding,
that the astronomers who planned Stonehenge
peer at the data screens of Jodrell Bank
whispering We were right.

It’s her ability to lift a seemingly ordinary, although acute, observation, into a poem that makes Joanna Boulter’s collection a joy to read. The ease of the rhythm points to a skilled writer, someone comfortable with both the sounds and meanings of words. In ‘Contemplation’, a woman keeps a cockroach,

The cockroach gazes at Mitsuko.
She does not know what it thinks, but it seems
not to be asking anything of her.
She finds this restful.

The longer vowel and softer consonants dampen the poem and give it a gentle rhythm, appropriate for the context. It’s easy, in the seeting of a demanding, modern world, to see how restful a focus on something other than the self and a list of obligations can be. Joanna Boulter doesn’t just look outwards: in ‘Her Ring’, her mother passes on a diamond ring when she dies, I felt / like Prince Hal, taking up that other circlet, / brutally roused by the old man’s wakening; / but he’d been dedicating himself to the diamon d/ of kingship. And it had been she/ who’d pointed that out to me, years before. The reference is to Shakespeare’s ‘Henry IV’ and the Prince of Wales, after playing the role of playboy, revealing his truer, more sober self, when he inherits the kingdom. A daughter doesn’t inherit a kingdom though, the poem ends,

The clothes I had of hers smelt of her perfume
and held the scent for years like an embrace.
In time my fingers swelled – I hung her ring
albatross-like around my neck. It will fit
again a comforting while on my way through
to being as she was then, too thin to wear it.

‘Albatross’ also makes a telling reference: a psychological burden, albeit not necessarily an entirely negative one, but connected to continuing a maternal line, that ultimately leads along a similar path to her mother’s. Physical frailty is explored in ‘Still Life with Figs’, I get a knife, halve one, am shocked / by brightness – scarlet seeds in scarlet flesh goes on,

But a quartered fig has nothing to hold its shape,
no inner membrane, no tension
nipple to base. That point of skin,
released, lifts, and the tiny seeds begin to fall,
a few at a time, bright on the white plate.
And suddenly I’m thinking
of my own sliced skin, my own severed
breast, fallen away into a dish.

There’s space for dreams too. In ‘Le Cheval Bleu’, the poem from which the collection takes its title, the horse is described as the one

And the poem’s ending is strong and purposeful

This collection marks a closing of a chapter for Joanna Boulter.  As the book’s back cover tells us, illness will prevent further work. So it’s very fitting that the poems it contains linger on after the book is finished.

Emma Lee has published Mimicking a Snowdrop (Thynks Press) and Yellow Torchlight and the Blues (Original Plus) and a third collection, Ghosts in the Desert is forthcoming from Indigo Dreams Publishing (2015). She blogs at http://emmalee1.wordpress.com