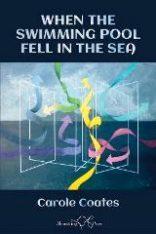 Poetry review- WHEN THE SWIMMING POOL FELL INTO THE SEA: Paul McDonald champions ‘slim volumes’ and admires the way that poems enhance one another in Carole Coates’s new collection.

It’s been argued that the Internet encourages superficial engagement with poetry: YouTube clips, Instapoems, website samples, etc, offer useful ways for poets to raise their profile, but tend to privilege individual poems at the expense of collections. As Clive James said in Poetry Notebook (2014), ‘[e]ven with such a literary subject as poetry, you can nowadays get a long way without taking your eyes off the computer screen’, and young people in particular may scarcely encounter the traditional ‘slim volume’ of poetry. Online engagement with single poems offers a different experience to the ‘slim volume’, and only in books is it possible to get a true feel for a poet’s voice and vision. I’d argue that this is the case with the Lancaster based poet Carole Coates, and her superb new collection, When the Swimming Pool Fell into the Sea.

The majority of poems focus on her husband’s dementia and eventual death, most notably those at the beginning of the book, like the long sequence “Crazy Days”. “Crazy Days 1” is a poem about how she and her husband were forced to sleep apart after he became delusional, believing he’d discovered a huge hole in their bed:

She goes on to recall the first bed they shared together, kneeling on it to watch him through the bedroom window, too respectful of etiquette to pick fruit from a tree in the garden, ‘because you always kept all the rules / as if it would help, as if it would do you good’. The final stanza shifts back to the present:

Tragedy strikes regardless of one’s respect for rules, but perhaps her husband’s manners and consideration did him some good after all, her fond memory closing the ‘chasm’ between past and present, husband and wife? Yet there’s something slightly critical in her assessment of his adherence to rules, and a hint that they’ve been self-serving (‘as if it would do you good’). It’s an important qualification, indicative of the tone that characterises the collection: while it registers deep affection for a lost spouse, there’s no mawkish idealising, and she depicts their relationship as a very human one, with enough reality and emotional complexity to make us trust her account. In “Crazy Days 3” her husband retreats into his own head, in “Crazy Days 4” he thinks she’s his mother, in “5” he’s caught in a perpetual present, beginning his book ‘at page one every morning’, shouting ‘Look, Carole, look’ incessantly at the same news story: ‘Our circular numb life / is just – again – and then again – and then again – again’. By “Crazy Days 11”, her husband is ostensibly ‘cured’ – ‘The antibodies that attacked your brain / have been repelled’ – but in reality he’s irretrievably lost: ‘those creatures your body loosed on you / have eaten away at both our lives’; her ‘cured’ husband won’t look at photographs of their past, and, even for her, memories have become ‘merely a small fragment of living / transfigured by light’. Their cherished past is diminished by the ruined present, and the question is whether love can survive such transformations.

Our appreciation of her predicament deepens as we move through the book, and after “Crazy Days”, the poems about her husband’s death are particularly affecting. The silence is palpable, for instance, in “Talking to John”, which opens:

The posthumous silence is part shock, part etiquette, akin perhaps to Emily Dickinson’s ‘formal feeling’ that comes ‘After great pain’: the so-called ‘Hour of Lead’; for Coates the weight of that silence grows as the poem develops, closing with the line, ‘though I sit at your desk waiting for you to speak’. Transient silence is one thing, but the prospect of perpetual silence is another, and by the end of the poem we can identify with the profundity of the loss that this silence signifies. It’s thrown into relief by the sense of turmoil in the poems that precede it too, of course, but only those who read the whole collection will appreciate this. “Mourning in Lockdown” also references silence, where it becomes almost tangible: ‘stillness and silence are things which are real and this house with its stairs / and windows and empty rooms is not real a virtual house imitation’. It’s about how lockdown compounds the silence and the impact of absence: ‘stillness and silence’ define her existence, eclipsing a former reality which now feels counterfeit: ‘this replica house / this simulacrum’, devoid of the life that made it a home.

Many poems in the final third of the book don’t address the central theme directly, but even those not obviously about bereavement are given emotional weight by the earlier sections: we read the later Coates poems in the light of the trauma and sadness she delineates so brilliantly in the opening two thirds, and they’re more meaningful and impactful as a result. For instance, “Falling in Love With the AA Man (And How He Taught Me To Love My Car)” tells of the dependable AA men who’ve helped her over the years, ‘Stolid like Barney McGrew and radiant as Blake’s Urizen’, these men taught her to treat her cars ‘like a friend’, and to name and humanise them: ‘You must love your car he said and so I always have’, naming them from that point on: like ‘Rosebud’ her ‘little Renault 5 / comrade, companion, friend’. You can read this poem on Coates’s website, where it’s included as a sample from the book, and I urge you to do so; however, the experience of reading it where it belongs – in her ‘slim volume’ – is quite different. Here we view it through the lens of her bereavement, and all that experience has taught her about the connections we make with the world outside ourselves. When we read the poem figuratively, it becomes a lesson about love, humanity, and memory: in order to love something we humanise it, and when it breaks down, as cars and people do, those human connections endure at the emotional level. We must cultivate, cherish, and above all remember them: Carole Coates’s book can help teach us how – particularly if we read the whole thing.