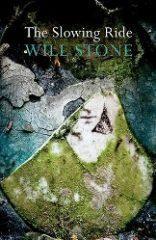 In our post-Brexit age of isolation, Will Stone’s world-view is valuable. It points us back to Europe and artists we may not have discovered—like the Czech photographer Joseph Sudek or the French engraver Charles Meryon who both feature in poems in this collection. It was as a translator of Betz, Rilke and Trakl that I first encountered Will Stone, and Europe is as good a place as any to start when it comes to The Slowing Ride. There are versions here ‘after Trakl’ (and one that reminds me of Rimbaud’s ‘Rooks’) and a slew of poems set in locations such as Bruges, Stuttgart, Piedmont and the Valais region of Switzerland.

The two new Trakls are not really translations but variations on the originals ‘updated’ to modern urban settings. They work because their idiom is a kind of hybrid that sounds like a translation but is in effect a new poem based on the rhythms and shape of the original. In Stone’s version of ‘Grodek’, for instance, ‘the night by-passes / bereaved women, the muffled scream / of their inoperable hearts.’ The way the women’s grief is physicalized in their ‘inoperable hearts’ is powerful—and carries with it some of Trakl’s own sorrowful distress at the losses he witnessed on the battlefield. The circularity of birth, decay and death in ‘the suburbs’ is addressed at the end of Stone’s poem:

Trakl’s ehernen Altäre, are no longer brazen but, like so many shop-fronts, boarded-up. The womb is undelivered of the unborn grandchildren who haunt the ending of the original. So there’s an interesting process of re-working and re-envisioning afoot here. Whether those last three lines would be entirely comfortable as part of a free-standing English poem is hardly for me to decide: it’s a cross-cultural, across-time experiment.

If Stone’s models are the great European poets then I think he fits best as an Expressionist, as in ‘Three Days’ where he offers us a Tory conference as a kind of danse macabre:

This is bold, public, political poetry: images dancing to the imagination. Less successful in my view are those poems where he takes on the mantle of a Rilke, as in ‘After the Storm’. In this instance he’s visiting the cathedral of Sion during ‘a particularly ferocious heatwave’, when, as his extensive note explains, ‘a phalanx of black-robed nuns suddenly appeared bearing water bottles and filed silently into the welcome coolness of the nave, where in rows they prayed and sang. The resulting ambiance possessed a rare beauty and sense of uniqueness, an unforeseen moment of experience that seemed uncannily extended beyond time.’ The note relays the context and sets the bar high for what the poem wants to achieve. He starts with another striking image

but then it shifts into a metaphor that dissipates some of the intensity:

Subsequently in a grand philosophical gesture he asks ‘In whose light are we saved, sun or moon?’ The answer begins with a line that Rilke would have been proud to own:

Now that’s wonderful, and it’s worth having the whole poem for just that one line. The poem’s ending, however, seems, to me at least, to lose the coherence the reader needs to fully grasp the out-of-time experience:

There are poeticisms here—the ‘white wayfarer’, the sun’s outriders—and try as I might I can’t connect the sun’s ‘riders’ with the word ‘heirlooms’. What is it exactly that we’re accepting? And how does that ‘but’ relate the fading tomb inscription to what has gone before? These questions I raise because the poem has big ambitions and deserves to be taken seriously on its own terms.

Those who know Will Stone’s previous book The Sleepwalkers will find themselves on familiar ground with The Slowing Ride. The shadow of the holocaust falls less darkly over this volume, though ‘Jewish children in Polish meadows’ are juxtaposed disturbingly with the avian victims in ‘The Shoot’, and the train whistles ‘long and cold’ as it approaches Vienna’s Karmeliterplatz in 1938. Again, the note that accompanies ‘The Final Journey’ is revealing. In this Stone explains how, as a boy, he stumbled on the book of the same title in his school library ‘and was transfixed by its harrowing contents’. His wish to approach the subject obliquely is fulfilled in this poem where visual images convey a real sense of historical hiatus.

It’s only in the final lines that the uneasy peace of ‘listless doves’ patrolling the eaves is disturbed. The malign intent of the new masters is no longer simply implicit.

A similar lassitude pervades the air of the World War II fortifications that were once part of Hitler’s Atlantic Wall, though now in retrospect the tension of pre-war threat is absent. The poem, ‘The Bunkers at Wissant’, opens with an evocation of the defences in their prime

and ends with the contemporary scene in which old men use the crumbling blocks for fishing, and despite the Baignade Interdite signs the summer swimmers ‘lay their towels there, / to steam on the baking concrete.’

This is Will Stone at his best, making pictures, finding the mot juste, letting the images speak for themselves. When he picks an easy target like the big game shooter in ‘Death of a Trophy Hunter’ or the vicar who isn’t au fait with the pronunciation of Verhaeren in ‘Lip Service’, his arrows, paradoxically, sometimes fall short. But where the perceptions are nuanced, the writing can be shiveringly vivid, as in his evocation of six infant foetuses in the Hunterian Museum: ‘so needlessly tight the thimble fists / and their mouths a petulant slit / and their arms like a dog’s toy bone / frozen in some chance gesticulation.’ Or this—from ‘Vanished Spirit of Bruges’:

In these and other examples like ‘Port Town in December’ where unidentified observers watch ‘the old pier / stagger naked into the gloom’ and hear ‘wind and wave sounds wrestle’ in the abandoned theatre, he takes his cue from the photographs of Joseph Sudek, and kneels to place his ‘new old stone / upon the slow-built cairn of history’.