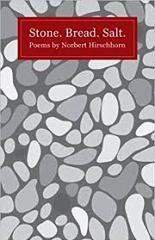 Norbert Hirschhorn’s new collection draws deeply on his Jewish heritage and contains poems that are honest, compassionate and wise

This new collection from Norbert Hirschhorn reveals him in reflective mood. As he approaches his ninth decade of life he is in a position to look back and reflect on what it was like to reach that Biblically allotted span of three score years and ten:

Many of us, who are also in our later years, will identify with this (never mind that the actual Domesday Book was more a reckoning of lands and taxes!). Hirschhorn is now also able to add further reflections on what he has learned since reaching the age of seventy-five: “I measure out my life in toilet rolls./ … / I know I look good in a hat. There’s comfort.” Such self-awareness, however, does not diminish his attentiveness to what is going on around him and in the longish prose poem ‘London Winter Blues’ he conjures up an atmospheric picture of November evenings in NW postcodes

But the poems are not all wry personal observations set in the here-and-now. Far from it. Hirschhorn also sets out to reflect on his recent family history, starting with his parents’ escape from Vienna just in time to avoid the Nazis and the Holocaust. His grandparents and other relatives remained in Europe and not all of them survived the war. ‘Letters from Vienna (1938-1941)’ contains found fragments from correspondence during those dreadful years and ends with Hirschhorn’s own sense of

The family stories are not all tragic. Hirschhorn’s “enchantress Aunt Hania” went with Jack, her communist husband, to Russia in the late 1930 and somehow survived the war even after Jack had been sent to a labour camp. Only after Stalin’s death in 1956 was she eventually able to make contact with the rest of the family in America.

In ‘The Destined One’ (a poem we shall return to later), Hirschhorn traces the possible trajectories – via New York, Palestine or London – that might have brought him from Vienna to his present situation. He admits that the route that he actually did take caused him some early problems in coming to terms with his own Jewishness

But by the end of this elegant ghazal we learn that he has now accepted and embraced “you are what you’re born with”.

To be Jewish is to be a potential inheritor of millennia of traditional oral and written wisdom. Some of this has long been accessible to the gentile world via the Old Testament books of the Bible. Thus Hirschhorn can preface an anguished poem on the state of present day Syria with Isaiah’s words Look, Damascus will cease to be a city, will become a heap of ruins. But in this age of exploitative global multi-national companies and the super-rich 0.1% he employs Biblical prophecy to more telling effect by setting the lines

alongside the pompous declaration

The most positive borrowing from scripture, however, comes from Leviticus and is in the poem ‘Shmita’. This expounds the concept of Sabbath rest for land and people – the original vision of sustainability and remedy for inequality. Shmita is “not in-your-face Yiddish, but Hebrew / … meaning ‘release’. Every seventh /year the land is returned to rest.” Moreover Shmita is

‘Repair Begins With Confusion’ is a long piece towards the end of the book which taps into a (sometimes) lighter vein of Jewish writing and presents a kind of compendium of folk tales, epigrams and proverbs. Among its maxims are: “Don’t try to be good, it only confuses”; “Only the poor can afford to be generous”; “Silence is the loudest sound in poetry”; and “Silence commemorates the six million”. On the subject of being true to one’s given self, Hirschhorn conjectures

A good question. And one to which I might – if I’m permitted to move to first name terms – reply and which Norbert would that be? We have already met several Norberts: the shrewd observer, the family chronicler, the literary historian. And there are yet more identities on show within the collection…

There is Norbert the translator who offers versions of several poems by another poet-physician, Fouad M. Fouad, including this bitter reflection on the ordinariness of most murderers.

We have already met Norbert the poetic craftsman – for instance in his use of the ghazal form in ‘Self Portrait’. He also gives us a fine villanelle which begins

And in ‘Lamentations’ he employs a form new to me for which I do not have a name. Its opening stanza is

The remaining stanzas create a grim sense of claustrophobia by recycling the same four loaded end-words – along with just one more: ‘truce’.

Last but not least we must acknowledge Norbert the romantic. The poem ‘The Destined One’ – which I said we would come back to – maps a number of routes the poet’s life might have taken. But they all lead to the same destination “met C … fell in love”. C is the poet’s wife Cynthia , to whom the poem is dedicated and who is “my Pole Star on the only road I’ve travelled by.” Even in poems where he contemplates his own mortality, the poet’s thoughts keep turning back to her:

Norbert Hirschhorn might have many reasons to consider himself lucky. But one of them is certainly the rich and varied heritage of poetic material he has been able to draw on in this fine collection. And we are lucky too to be able to enjoy it.