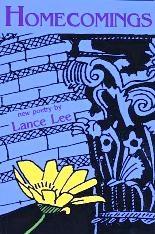 A poet, playwright, novelist, and writer on drama and screenwriting, Lance Lee is the author of thirteen books. A past Creative Writing Fellow of the National Endowment for the Arts, his fourth collection of poetry, Seasons of Defiance, was a finalist in the 2010 National Best Books Awards. Homecomings, his sixth collection, reinforces his considerable achievement as a poet. In Seasons of Defiance, he wrote: There is nothing left for me to do but go/ deeper, ever deeper, into my meaning. (‘Dreaming The End of Going West’). That is what he does in Homecomings, his passion and compassion in engaging with a panoramic range of experiences deepening. He writes with conviction: I see all there is, and all a man may see.

In each poem he explores the human predicament, enriching our understanding of it. In ‘What Am I?’ he reminds us that –

– reaffirming what it is to be human. Examining the link between character and fate continues to shape his exploration as it did in Seasons of Defiance. He takes his exploration further by writing about the vulnerability and resilience of life, including his desire to be wholly one with nature (as expressed in ‘Pendant’ in Seasons of Defiance). In ‘Weston Woods’, from Homecomings, he carries on with the conversation:

Homecomings reflects not only the greater complexity of our world, but also the poet’s increasing awareness of human limitations, sometimes making him rage with an intensity one cannot miss: My anger soars in the squealing air, / for I desire all you desire more intensely / you who can never age can know. (‘Mrs Robinson’) or Stop asking me about love: all I know / is betrayal, injustice, rejection, dreaming. He adds Don’t think fame consoles / a love never gained, a love that then / cannot be lost. The truth is we die and love with us. (‘Dante To An Admirer Obsessed With Love And Fame’). He talks of art – the enamelled bird that no longer sings on his ivory bough, but whose beauty, once heard, must destroy us all. He also writes wittily about old men wearing young women like bangles (‘Contra Ravenna’).

The poems in Homecomings, presented in five sections, reflect on Life’s harsh truths as much as the enduring and redeeming aspects of Nature, Love, Self, Illusion, Art. These poems are meditations, conversations, awakenings that become luminescent, almost catching fire in the readers’ mind. In the opening poem, ‘Clichés’, woken from our lifelong nightmare

This awakening is Nature’s gift,

The unexpected image of the crucifixion transforms us along with the poem.

In a homage to Camus, ‘A Wasp In The Subway’, a dream of another life…in brightly lit places is woken / to poverty, to myself, alone. / That safety I once held, / a life known, is gone. Smashing against surfaces it cannot pierce, it is

The ability to transform suffering into joy provides a reason for living, to make what we can of our lives. The metaphor of dreaming-waking, darkness-light, illusion-reality appears in several poems. There is an additional dimension to the dialectic as we all enraptured know for one moment / that what is real is rare, that our lives are / entangled, endlessly new and strange (‘A Hula Girl Weaves Death And Memory and Life Into Her Dance’) raising the question of the dancer and dance. Like Yeats, Lee argues for one, united view of life and death.

Thus, the knowledge of loneliness and nothingness is also part of being human. In ‘The Day Moon’ the poet is aware how in the cold hours before dawn/ when the soul is naked it feels its loneliness. The sense of waste in both nature and life is delivered with mastery in ‘Waste Fruit’ where on observing fruit rotting on the ground he writes:

It leads him to the moving and sombre realisation that all he has to offer will be spurned as well, and

The book includes a section, ‘An Incendiary Ground – Encounters with Greece’, which contains six drawings of vases. The cover and interior art was created especially for this publication by Ron Sandford, reminding us of Lee’s previous collection, Transformations, where, the collision between sensibilities enhances the overall impact of the poems as they cascade down the page carrying their emotions, anguish, disappointment, ecstasy, the discovery of the self through the other. In ‘The Cypresses of Athens,’ Lee writes:

Know Thyself. / ‘That command/ still lives in my blood, Lee reminds us in ‘My Father’s Shade At Delphi At The World’s Center Amid The Ruins Above The Olive-Swaddled Valleys’.

Many of Lee’s observations also arise from experiences linked to place and nature. In ‘Lucretius Looks North And Throws Himself Into The Arms of Love From A Cliff in Big Sur, Joyously’, the poem begins with a powerful description of a wide bay in Big Sur surging with life – with cormorant and pelican, otter, seal and/ porpoise plunged in the green waves…. Our spirit is absorbed into this primal force, this all-encompassing surge of life / certain that however we maim and murder / with gun and poison, what remains grows greater. We are then swiftly reminded of the fragility of the human condition:

What follows is a reaffirmation of the redeeming power of love – that brutal, unrelenting, tender power / that life by life lifts us toward knowledge / and beauty. One is reminded of Philip Larkin’s: What will survive of us is love. (‘An Arundel Tomb’). The collection ends with ‘Ars Poetica’, where Lee talks about what it means to be a man:

The transmutation of life and love is indeed what all art, including poetry, is.

.
An internationally published poet, critic, reviewer and scholar, Shanta Acharya is the author of ten books. Her New and Selected Poems is due for publication in 2016. Educated at Oxford and Harvard, her work has been featured in major publications, including Poetry Review, PN Review, The Spectator, The Guardian Poem of the Week, Edinburgh Review, The Bloodaxe Book of Contemporary Indian Poets, Journal of Postcolonial Writing, Asia Literary Review, The Little Magazine, The HarperCollins Book of English Poetry, Language for a New Century: Contemporary Poetry from the Middle East, Asia & Beyond (Norton, 2008). In 1996, she founded Poetry in the House, and has been responsible for hosting monthly readings at Lauderdale House, in London. She has twice served on the board of trustees of The Poetry Society, UK. www.shantaacharya.com