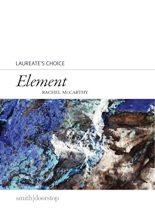 Rachel McCarthy is living proof that, as Einstein said, all arts and sciences are branches of the same tree. Born in Preston, Lancashire, she works as a scientist for the Met Office in Devon, where in 2009 she founded ExCite Poetry, the Devon branch of the Poetry Society. In 2013 she became a director of the Exeter Poetry Festival and has been noticed by our Laureate Carol Ann Duffy as one of four of the most exciting new voices in poetry in 2015. Element is her first pamphlet, published by smith |doorstop as ‘Laureate’s Choice’.

A quotation from the Nobel-winning physicist Richard Feynman leads us off: Poets say science takes away from the beauty of the stars – mere globs of gas atoms. But, he argues, appreciation of the science of the cosmos does not do harm to the mystery … far more marvellous is the truth than any artists of the past imagined it. So, can poetry and science ever come together in harmony? McCarthy takes up the challenge and achieves it exquisitely.

An element from Mendeleev’s Periodic Table gives each poem its theme – Au, for example, or Hg. Tight structure often liberates the best in us and McCarthy distils in each poetic crucible several aspects of the subject matter, so it is well worthwhile checking the notes at the back of the pamphlet to catch the full complexity.

‘On Seeing Two Followers of Cadmus Devoured by a Dragon’ takes us to Cornelius van Haarlem’s gruesome painting of that name (1588) and it helps to know, for example, that the men in the painting were followers of the mythological Phoenician prince Cadmus who founded the city of Thebes, and from whom the element Cadmium gets its name. The poem challenges our preconceptions about violence from the first triplet:

For ‘Memorial at Norilsk’, the element is nickel (Ni) and McCarthy tells us in the prose note that the gulag archipelago of Norilsk in Russia is home to Norilsk Nickel, a private mining company. The first plant there was built by those detained in Stalin’s camps and no-one knows how many died in its construction. Here is how McCarthy begins her poetic treatment of these facts:

McCarthy combines such images with conundrum after puzzle after riddle. Some, like the poem actually called ‘Riddle’, become weighed down by the number of aspects they have to carry, but many are marvellously clear. ‘Postcard of a Break-Up Written at Edinburgh Castle’ is a joy:

Edinburgh is proud of Mons Meg (1449) but she kept overheating in battle because of her size. It was not until the First World War that the Germans added Molybdenum (Mo) to steel that cannon of that size became viable. History, science and poetry unite in one elegant McCarthy package tied up with humour.

Sometimes the poet plays with traditional forms and structures, sometimes not. The span of the emotional subject matter is wide, from the poet’s sister having cancer, a spring crocus in the sun, war pilots and Arctic warming, to Lady Jane Grey’s last moments. Just when the convolutions might become distracting, we find something like ‘On Worthiness’. Based on Iridium (Ir), the poem brings back to mind the challenge of reconciling poetry and science, as if they had ever stopped being on speaking terms. Here it is in full:

.
.
Rosie Johnston’s three poetry pamphlets have been published by Lapwing Publications (Belfast), the latest Bittersweet Seventeens in March 2014. She also writes fiction and journalism, facilitates writing groups in London and Cambridge and is Poet in Residence for the Cambridgeshire Wildlife Trust. www.rosie-johnston.com