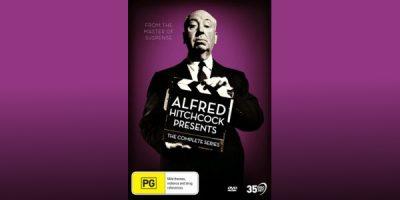 Hitchcock said he had always wanted to work in the short story.  ‘The small simple tale of a single idea building to a turn, a twist at the end.  A little shocker.  The story that’s lost when stretched to the length of a movie.’ What the short story and TV film must have is brevity.  A concision that focuses its singular and dramatic intent.  The logic and reasoning of the tale has to be sketched.  Suggestion teasing out suspense is paramount, making for a focused unity of directing, writing and acting.

Alfred Hitchcock was the perfect control freak for this project.  And his Alfred Hitchcock Presents is a classic example of tension and mystery tightly packed together so that when the spring snaps back the dénouement really matters.

How then to begin to approach this big DVD box set?  Watch again the Hitchcock directed episodes – all 14 of them?  Chose the ones with your favourite performers (many star names and outstanding character actors here) first?  Select by writer credit?  (Ray Bradbury, Cornell Woolrich, John Collier and Roald Dahl stand out).  Or perhaps tackle the contributions of director Robert Stevens?  He directed more episodes than anyone else.  But all this is cherry picking.  So why not also plunge in at random?

I did (or partly did) all those things.  And I never came up with a disappointing episode – only teleplays that were marginally better than others.  The standard was pitched high.  Hitchcock was a TV pioneer who raised the production bar to a superlative level.

I watched the very first episode followed by the very last to find no falling off in quality.  “Revenge” begins the AHP journey and is a gem.  Elsa (Vera Miles) is a dancer recovering from a nervous breakdown.  She lives in a trailer and is newly married to Carl (Ralph Meeker).  Whilst Carl is at work Elsa is attacked by an unknown assailant.  The assault traumatises her.  Out driving with Elsa her husband is driven to revenge when she points out the attacker walking along the street.  Carl goes to the man’s hotel and beats him up.  Shortly afterwards Elsa remarks on another passer-by as being her assailant.  The horror sinks in for Carl.  And the first wrongly accused man dies from his injuries.

Vera Miles gives a brilliant performance that’s a precursor to the distressed wife she played in Hitchcock’s feature The Wrong Man in 1956.  There’s an unnerving moment in “Revenge” when Carl asks Elsa about her assailant.  She simply keeps repeating ‘Then he killed me.”  This leaves you no longer confident in believing that Elsa was in fact attacked at all.  For during breakfast Carl had remarked to Elsa that practising to be a ballerina has maybe cut her off from the real world.  On leaving for work he then asks, ‘And what are you going to do all day in this wonderful imaginary world?’ Perhaps Hitchcock is suggesting she’ll dream up an intruder to enter the home?

This stunning opening was followed by viewing the concluding episode of AHP.  “Where Beauty Lies” stars Cloris Leachman and George Nader.  It’s the story of Caroline (Cloris Leachman) an ‘unattractive’ woman whose looks make her feel like she’s only ‘practising for second best.’ Caroline’s brother Colin (George Nader) is a handsome actor who attracts many women.  Colin’s good looks create a sibling rivalry for his sister.  Caroline plans a domestic accident that will disfigure Colin’s face and make him dependent on his sister’s care.  But the twist (predictable but cleverly accomplished) to the tale has other consequences.  Robert Florey directs well an emotionally engaging episode that veers away from crime to SF reminding me of the Twilight Zone story, “Eye of the Beholder.”

And so to director Robert Stevens.  On sampling his contributions I found myself constantly admiring the skill and sensitivity he brought to his films.  Take Stevens’s “Premonition” Its memorable scripting evoked the atmosphere of The Twilight Zone but now minus the SF.  A son, who hates his father, returns home, after 4 years, to learn of his father’s mysterious death.  It appears to be murder so why is the family colluding to keep the murderer’s identity a secret?  A bewildering amnesic piece that had me guessing right up to the end.

Integral to the success of AHP is casting.  This is secure and strong.  Especially when you have such stars as Vera Miles, Charles Bronson, Claude Rains, Walter Matthau, Joseph Cotton, William Shatner, James Coburn, Laurence Harvey and Patrick Macnee.  Not forgetting such excellent Hitchcock repertory people as John Williams and Norman Lloyd.  Lloyd, who was in Hitchcock’s 1942, Saboteur actually did some AHP directing.  His gripping “The Creeper” about a woman, anxious to have a lock and chain put on her door, as a serial killer is on the prowl, illustrates Hitchcock’s stylistic influence.

Walter Matthau is irresistible as a cunning lumber merchant in “A Very Moral Theft.”  You do sympathise with his girlfriend (An excellent Betty Field) whom he exploits to loan money that he then can’t pay back.  However Matthau’s ‘sacrifice’ for love at the deeply sad ending leaves you conflicted as to you opinion of the man.  Superb acting all round.

In “Arthur” Laurence Harvey delivers a deliciously absurd performance as man who runs a chicken farm, murders his manipulative wife (Hazel Court) and eludes being arrested.

Whilst the face of ruthless businessman Joseph Cotton, now a paralysed man in a car accident, filmed in huge close-up with voice over, is a wonderfully compelling watch in the masterly “Breakdown” directed by Hitchcock.  And not to forget Hitchcock’s daughter Pat who acts well in several episodes.  Including “Into the Air” – one of AHP’s few period dramas.

Apart from the famous authors I’ve mentioned there are many more lesser known writers who sparkle with a tightly constructed script.  Yet I would also shine the spotlight on the writing of Hitchcock’s leads-in and leads-out for the series.  No one had ever dramatised a presenter of an American TV series in this manner before.  Hitchcock’s staged cameo vignettes come with costumes, props and dark witty dialogue (Even extending to a continuous mocking of his TV sponsor.)

‘I shall not act but be more of an accessory before and after the act.”  Hitchcock’s statement, from his lead-in to the very first episode, reveals the droll tone of his many-to-come appearances.  This was written by James Allardice who was employed to ghost -write.  He and Hitchcock shared a similar macabre sense of humour.  It was an inspired touch.  Together they’re consistently funny and inventive, making you wish that this DVD set also contained a disc of all these contributions only.

This is a hugely entertaining enterprise that all enthusiasts of Hitchcock’s feature films should own.  It allows us a greater and more comprehensive overview of Hitchcock’s sensibility; the clever marketing of his image; try-out sketches that might be developed into Hitchcock features and, most importantly perhaps, how a genius helped make American television, during the 50’s and 60s, develop as an art form by producing crime tales (quietly subversive) so as to undermine the American Dream.

“Good evening ladies and gentleman I’m back” That’s my plea for Viavision to now give us the complete Alfred Hitchcock Hour TV series.  I am greedy for more murder in the home!