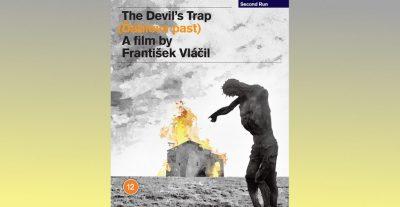 The Devil’s Trap 1961) was directed by Frantisek Vlacil and is considered the first part of a loose trilogy of historical films that includes Marketa Lazarova (1967) and The Valley of the Bees (1967).  All three films display an arresting black and white imagery that recalls Sergei Eisenstein – The Devil’s Trap’s pastoral lyricism evoking The General Line.  You can also sense Carl Dreyer and the Dozvhenko, of Earth, shadowing the director.  However Vlacil doesn’t lean on his influences but welds their inspiration into his craft and vision: disrupting his eloquent visuals, with unexpected camera movements, to create strange perspectives for the historical film.  And The Devil’s Trap, often technically and thematically dense, is a strange affair.

The Devil’s Trap probes history with ideas and questions about science, religion, and superstition in early 16th century Czechoslovakia during the inquisition.  Cestmir Randa plays a decadent regent who wants a new granary to be constructed.  The local miller Spaleny (Vietzslav Vejrazka) tells the regent that the land is unsafe and that thirty years ago his grandfather witnessed the burning of the old mill by Swedish soldiers but the miller’s family miraculously survived unharmed.  The regent and his bishop are suspicious.  The priest Probus (Miroslav Machacek) is called in to investigate the land (a network of limestone caverns and submerged river) near the proposed mill site and the claims of Spaleny.  Initially Probus agrees with the miller’s analysis until the regent’s barn collapses and people die.  Then he’s convinced that Spaleny is working with or being secretly controlled by the devil.

It’s perfectly reasonable to view The Devil’s Trap as a political allegory about communism and the suppression of dissidence.  In the sixties Czech directors had to deviously code in their protestations against the state.  However I’m more inclined to accept this film as the authority of the church being disturbed by the growing power of science (The mill owner is frequently depicted using a water diviner) and of its attempt to shift any rivalry of power from scientific verification to a more comfortable fight with the trickery of the devil.

Yet The Devil’s Trap proves even more idea-rich than this.  Vlacil’s direction of actors prises out a strong sense of ambiguity.  The quizzical look of the miller’s son Jan (Vit Olmer), his love Martina’s (Karla Chadimova) puzzlement and the brooding countenance of the priest Probus reveals determination alongside of ambivalence.  Do they believe science is Christian directed or not?  Or is everything being underpinned by the Devil?  Supernaturalism, belief and a new rationality appear to contradict their thoughts.

You keep wondering what’s happening beneath the surface detail.  Questions kick in half-way through the film.  And the mystery is heightened by the sometimes dream-like look of the photography of Rudolf Milc aided by haunting music of Zdenek Liska.

There’s an odd, and subtly uncertain moment when the priest and his assistant are staring down from a height, at the river and entrance to the caverns.  The assistant warns Probus to be careful not to fall for no one is capable of making the ascent or descent to the cavern entrance.  Yet no sooner has he said that when we glimpse a tiny figure moving about down below.  Neither of the two men remark on this fact.  And as quickly as the figure is glimpsed it’s gone.  Was that a real worker on the land, a delusion of the devil or the devil’s assistant?

When the The Devil’s Trap broods it also excites: more about concepts than action.  Instead of violent conflict (though it has its share of tragic accidents and invasion) it overall remarkably presents a psychological struggle to accept reason, even atheism, over belief in God and the Devil.  Unfortunately, this is the age of the inquisition.  The European enlightenment is over a century and a half away.

The Devil’s Trap is so beautifully crafted, intelligent and unusual that I can forgive occasional lapses into being too ponderous in tone, although it’s a very sensual film and not over-cerebral.  Personally, a bit of strained seriousness is a plus for me in a film heroically tackling such big themes.  Accompanying them is 89 minutes of one striking shot after another (the pre-credit scenes will immediately grip you) that are beautifully conceived.

Visually Vlacil’s recreation of medievalism ranks with Bergman or Tarkovsky: perhaps not as viscerally dressed-up as those two masters but just as powerfully authentic in its own distinctive manner.