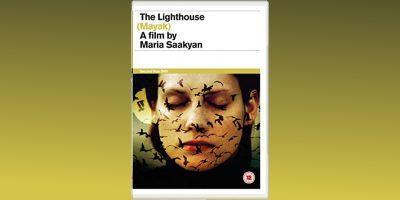 The opening images of The Lighthouse (2006) set the scene for the film’s reoccurring visual motifs.  Villagers, soon to be refugees, dancing and singing on a railway track.  A badly burnt antiquarian book.  The sleeping face, filmed on a train, of its female protagonist.  Mist creeping over the high mountains of an Armenian village.  Black abstract-looking birds on a skyline.  Title credits materialising from ink splashed across the screen.  A woman walking along the road to her village.

This will turn out to be a film about homecoming.  Remembrance.  Displacement of a community.  A flight from military bombardment.  The continual fog of war merging with the mountain mist where enemy helicopters threaten to replace local birdlife as well as destroy the villagers.  But eventually it transitions to a fragile dream of a better life in a semi-autobiographical tale told by a woman observer, the director herself, Maria Saakyan, whose ‘burnt’ book stands in for the grainy and luminous celluloid of The Lighthouse.  And when Lena, finely played by Anna Kapaleva, lights a candle in her lighthouse shaped lamp, retrieved from home, this plausibly suggests a symbolic comfort that will guide her through a fog of moral conflicts.

To call The Lighthouse a war film doesn’t feel right.  Nor can that genre fully describe, or contain, the poetic atmosphere of this disturbed dream of a film.  We don’t see the bloody human carnage of battle and destruction of property.  Halfway through the film we encounter the first civilian (?) corpse.  A body floating in a river is pointed out by a villager.  Whilst the village is some distance from a battlefield the soundtrack is very loud with explosions from close aerial attack.  There’s a compelling scene where Lena protects a disturbed neighbour that says so much about the stress of war.

I think however that The Lighthouse is both a visceral and at the same time a tenderly reflective film about the effect of war on civilians.  And particularly so in the impressively filmed crowd scenes of people desperate to board trains and leave Armenia.  Saakyan beautifully orchestrates these moments, reminding me of early Rosselini war films and that “witness to history” sense in a film like Preminger’s Exodus.  I’m not aware of Saakyan having seen the work of those directors but the verisimilitude of her filmmaking here is terrific (Later on she skilfully incorporates real crowd documentary footage to great effect.)

This is very female centred film.  An old woman breaks the windows of her house thinking that looters will assume the property is abandoned, has no possessions, and therefore won’t break in.  The grief stricken mother grieving, by the road, for her dead daughter (‘Where is the stone that would break my hapless head?’ she cries) and Elena, looking at times like Rita Tushingham, who drunkenly picks up a shotgun, during a meal, and blows away a screen and a kitchen door – a scene replete with reckless frustration and absurd comic rage.

These are memorable moments full of warmth and compassion.  Men  are present, with their Jewish Armenian humour, but take second stage to the women.  It’s Elena and her grandmother (Olga Yakovieva) who eventually persuade grandfather (Sos Sargsyan) to move away, with the family, from the village to a safer place.

The Lighthouse contains striking imagery that does not over-beautify any aesthetics of war (Only in one brief moment, self-consciously copying Tarkovsky, in the prologue and epilogue images of burnt books, does Saakyan falter in her editing and I think should have made cuts.)

Overall Maria Saakyan has made an evocative dreamy, yet edgy, war document.  Her heart resides in this original, personal and deeply felt film.  Despite a sometimes muted bleakness there’s hope and eventual affirmation In long-shot, as Lena leads the family and friends, up a hill, to their new refuge, she stretches out her arms as it they were the wings of a bird wanting to joyfully fly.  There’s a need for return and renewal: this is finally what The Lighthouse eloquently addresses.

It’s a remarkable achievement from a director who was only to make two more films and direct an opera before dying, at 38, from cancer.  On the evidence alone of the wonderful The Lighthouse Maria Saakyan has, for me, an assured place in Armenian and world cinema history.