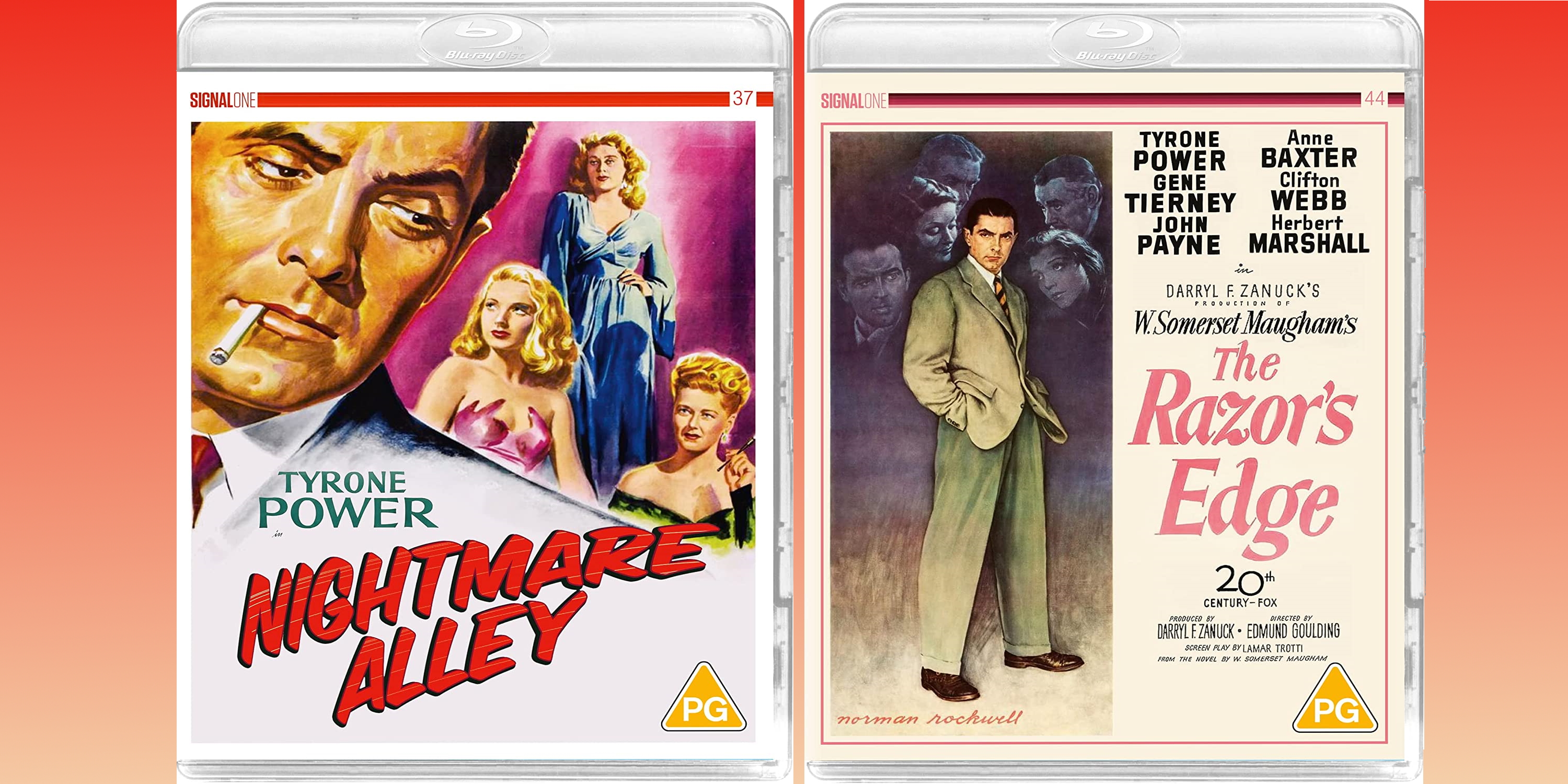 Nightmare Alley and The Razor’s Edge

However it still managed to be a more powerful film than Del Toro’s.  The new film contains more of the novel but is mistakenly transformed into an overlong horror film, visually impressive but dramatically muddled.  The older version, one of the blackest film noirs ever conceived, is focused and admirably concise, within its studio constraints, shorter with a toned-down ending, but for me it’s the adaptation I’ll return to.

But what is a geek?  Well first of all forget the modern definition as being “an unfashionable or socially inept person.” We are entering horror fiction language where according to the circus barker, in the Goulding film, a geek is “the missing link.”  A degraded thing trapped between a state of ape and man.  In reality it’s a bum whose hit rock bottom.  And in the bizarre reality of the American carnival and circus world, from the 1920s to the 40s, a geek disturbingly ‘entertained’ the crowd.  He stood in the centre of a circus ring, chased live chickens, bit of their heads and swallowed them.  Many of these pathetic geeks were the abandoned lost of the Great depression and WW1: homeless alcoholics or drug addicts paid in narcotics and drink, then given free board.

In Nightmare Alley (1947) the geek chicken attacks are suggested but not shown.  Yet the principal tale is one of fatal downfall.  Stan Carlisle (Tyrone Power) works as a promoter in a carnival show.  He causes the death of Pete (Ian Keith) by accidentally giving him wood alcohol to drink instead of moonshine.  He discovers Pete’s secret code, as a bogus mind reader, leaves the carnival to team up with Molly (Coleen Gray) and become “The Great Stanton” touring expensive night clubs in Chicago.  Stan feels guilty about Pete’s death and visits a psychologist named Lilith (Helen Walker) resulting in not merely counselling but the two of them conspiring to manipulate and swindle vulnerable patients.

The casting of the strikingly handsome Tyrone Power in the role of Stan was unusual and very unlikely given his glamorous box office appeal as a romantic lead.  But Power was passionate about the project and eager to break away from starring in films he considered bland and mediocre (The only comparison I can make with Power’s change of image and to stretch his acting talents is with Dirk Bogarde in the 1960s.  Bogarde was anxious to be rid of his light comedy roles in the Doctor film series.  So his fans were probably equally shocked or delighted when he took the part of a gay barrister in Victim and of the sinister working class manservant in The Servant.)

What haunt’s me on my third viewing of Nightmare Alley is Stan’s dirty, unkempt appearance and the cruel makeup on his face as a geek who’s descended to the lower depths.  Powers countenance was achieved by the esteemed make up artist Ben Nye.  The geek’s eyes    speak soulfully of isolation and breakdown.  What’s so clever and profound is that Nye didn’t go for monster transformation.  Powers     has a weary and very broken human, look.  Smudges of dirt and  cuts and dents, on the once completely handsome face, of a former confident Stan, and movie idol Power, really shock to pull you up sharp.  These are the terrible marks of a tragic, pitiful man who at first isn’t recognised by his former carnival boss.  This artistry of movie makeup is as brilliantly effective, but in a very different way, to say John Hurt’s in The Elephant Man or one of the many silent film faces of Lon Chaney.

Apparently Goulding liked to do many jobs on a film set but wasn’t that bothered about the photography.  Lee Garmes photography on Nightmare Alley is magnificent: all pitch black holes and haunted  greys and whites breaking through to create a brooding darkness of mood in this truly extraordinary noir.

One year before, in 1946, Tyrone Power starred in another Goulding film, The Razor’s Edge.  A very different story based on the 1944 novel by Somerset Maugham.  No geek in sight here.  Yet interestingly an outsider figure, not beyond the pale, but viewed with both interest and suspicion.  There’s no facial transformation required of Power but an inner change of spiritual enlightenment.

Larry Darrell (Tyrone Power) returns from his pilot service in WW1.  He’s a member of a disillusioned generation of young men.  Though instead of throwing himself, to forget the war, into a thriving 1920’s American capitalism he decides to drift and embark on an inner search for meaning.  Elliot Templeton (A terrific performance by Clifton Webb) the uncle of Larry’s fiancée who despises Larry’s attitude to life.  His fiancée Isabel (Gene Tierney, wonderfully sexy and schematic) is deeply in love with Larry but sees no financial security in marrying him.

Larry departs for bohemian Paris and next to India where he meets a guru who aids his enlightenment.  On returning to France he encounters his friend Gray Maturin (John Payne) now Isabel’s husband and a shaken victim of the 1929 crash.  Larry also re-engages with Sophie (Anne Baxter, she gives a deserved Oscar wining performance) who’s lost her husband and child in a car crash.  She’s now an alcoholic and dancer in a sleazy night club.  And Isabel is still very much in love with Larry.  Although his contemporaries have suffered Larry appears aloof and unscathed: detached from the messy troubles of society.

A young man rejecting materialism for spiritual values is a pretty hackneyed theme.  The Razor’s Edge is a journey film that doesn’t escape falling into kitsch.  It does signal Lost Horizon’s Shangri-la in  the early ‘getting of wisdom in the Himalayas’ scenes.  But intelligent scripting from Lamar Trotti quickly reins this in to deflect any explicit platitudes about the ‘right’ way to live.

Somerset Maugham was an excellent, and now underrated, mainstream writer.  He had a great gift for storytelling and disliked Trotti’s script – perhaps because his own screenplay wasn’t used.  Yet Maugham’s shrewd insight into people’s emotional lives, getting entangled in ambition and orthodox values, rather than some ‘higher’ meaning, does come through.  And Goulding beautifully directs his actors to easefully draw out their characters strengths and vulnerabilities.  (We even have Herbert Marshall playing Somerset Maugham acting as friend to all and a voice over commentator: an authorial voice that works for me.)

The Razor’s Edge never flags.  It’s two and a half hours of appealing romanticism and nobility of intention.  The Razor’s Edge has been sniffed at as being simply ‘glossy’ and even ‘facile.’  That’s mean.  It’s not a great film but a hugely entertaining, touching and seductive example of late 40’s Hollywood craftsmanship.  Whereas Nightmare Alley, at under two hours, is compelling and unconventional horror melodrama.  I wouldn’t be without either.

Nightmare was violently against the grain and a box office flop.  And Razor resolutely conventional yet questioning societal norms was a huge hit.  Both are the film children of Edmund Goulding who on the evidence of these films and others (The Old Maid and Dark Victory) was a fine director.  Auteur critic Andrew Sarris once classified Goulding, in his 6th category of directors, as ‘lightly likeable’.  That’s unfair.  I’d move him up, not to Sarris’s “Less than Meets the Eye” (category 5) but my own 5a and name it “Much More Than you Ever Expected.”